Posted on March 12, 2017 by Lutheran Church of the Resurrection 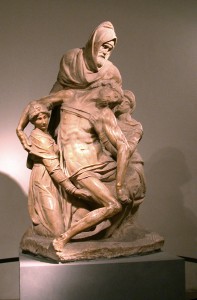 The setting for our gospel reading is the Passover Feast in Jerusalem. The verses just previous to what we heard were these:

23 Now when he was in Jerusalem at the Passover Feast, many believed in his name when they saw the signs that he was doing.

ONE of the ‘MANY who saw the signs that He was doing” was a man named Nicodemus.

“This man came to Jesus by night and said to him, ‘Rabbi, we know that you are a teacher come from God, for no one can do these signs that you do unless God is with him.’”

We wonder, what was Nicodemus’ interest in Jesus? What did he want to learn and why? Curiosity and interest is not the same thing as belief and trust. The fact that he came to Jesus ‘by night’ probably means that he didn’t want anyone else to see him associating with Him.

By the 1st century A.D., the Scribes and the Pharisees had pretty well given up on a ‘prophetic word from God.’ The prophet Malachi was the last prophet heard from in over 400 years and it seemed pretty clear that God was done with speaking through these men who spoke for God – “thus says the Lord.”

b. Ruling Council
John also tells us that Nicodemus was a ‘ruler of the Jews.’ He was a member of the “Ruling Council” – the Sanhedrin. The Ruling Council was concerned with maintaining the spiritual life of Israel according to the “Law and the Prophets.” They were the Israel’s spiritual leadership.

c. Nicodemus visits Jesus
And now that we know just a little bit about this man and a bit about where he is coming from, we wonder WHY Nicodemus “came to Jesus.” What was his interest? Or was it simply curiosity?

His first statement to Jesus may reveal the question that was nagging at him enough to take the risk of being seen with Him. As a Pharisee, he believed that the time for Prophets was over. Yet, Jesus sure did sound like a Prophet. And then there were those ‘signs’ – those miracles just like many of the Prophets had done.

And so Nicodemus says, “Rabbi, we know that you are a teacher come from God, (that’s a long way around actually having to say the word, ‘prophet’), for no one can do these signs that you do unless God is with him.” Nicodemus is hoping that Jesus will either confirm or deny that He is a prophet.

He can’t ‘see’ that this Jesus IS the King of the Kingdom of God, in the flesh, dwelling among us.

Paul writes the Corinthians saying, “we walk by faith and NOT BY SIGHT.” (2 Cor. 5:6). Jesus will later say to His apostles who have seen Him with their eyes – “Blessed are those who have not seen and yet believe.” (John 20:29). They never actually ‘saw’ Jesus with their eyes and yet they ‘see’ Him as only true faith can. Nicodemus could not ‘see’ the Kingdom of God because he had no faith. He was ‘blind.’

And then Jesus states the reason why Nicodemus and all of his Pharisee and Lawyer friends “cannot see” and “cannot enter.” ‘TRULY, TRULY I SAY TO YOU, we (that is, all of the prophets in the Old Testament) speak of what we know, and bear witness to what we have seen, BUT YOU DO NOT RECEIVE OUR TESTIMONY.”

Jesus has answered Nicodemus’ question after all. He includes Himself with all of the prophets who spoke for God – all of whom spoke about Him, the King of the Kingdom of heaven – WHO WAS STANDING RIGHT IN FRONT OF HIM. They said, “Thus saith the Lord.” And He says, “I say to you.”

All of this is pretty hard for Nicodemus to process. “How can a man be born when he is old? Can he enter a second time into his mother’s womb and be born?’

Jesus corrects him, explaining that the ‘rebirth’ that He is talking about is not a physical but spiritual. It comes ‘FROM ABOVE.’ Nicodemus works from a ‘FROM BELOW’ approach to God where man works his way up into the Kingdom of God by his obedience to the Law and holy living.

Jesus however is talking about a Kingdom that comes down ‘FROM ABOVE.’ It is ‘by water and the Spirit.’ It’s not about what you must do but about what must be done to you. It’s nothing you can control – which drives control freaks like Nicodemus crazy. The “Spirit blows where it wills.”

It shouldn’t be too hard for us to understand how confusing this must have been for Nicodemus. Jesus is telling Nicodemus that ‘seeing’ / ‘entering’ the Kingdom of God is all about DOING NOTHING – not about DOING SOMETHING. Which, for a man like Nicodemus who is all about ‘doing the Law’ must be hard to process.

We wonder, as Nicodemus ponders all of this, how does it affect him?

III. John 7
There is another time when Nicodemus’ name comes up in John’s gospel. In chapter 7, we are told that as the people become more and more interested in Jesus, they begin to say things like, “Could this be The Prophet?”

Of course, talk like this is pretty upsetting to the Pharisees and the Ruling Counsel who have found lots of reasons for which Jesus could not possibly be A prophet let alone THE prophet.

And so, John writes, “the chief priests and Pharisees sent officers to arrest Him.” Nicodemus was on that Ruling Counsel and a part of that decision.

The officers go but return empty handed. And when asked why, said, “No one ever spoke like this man!” The Pharisees were furious. “Have you also been deceived? Have any of the authorities or the Pharisees believed in him? But this crowd that does not know the law is accursed.”

And it is right there that Nicodemus speaks up and says, “Does our law judge a man without first giving him a hearing and learning what he does?” In fact, in the book of Deuteronomy, this is exactly what the Law requires.

What was Nicodemus thinking? Did he see the hypocrisy of his fellow Scribes and Pharisees who strive to live by the Law, but who are willing to break the Law when it serves their purposes? Maybe Nicodemus is more perplexed about this Jesus than ever? Just by listening to Him, these soldiers return home believers.

IV. At His Arrest
Finally, only when He was ready to be arrested, would the soldiers bring Him to the RULING COUNSEL for questioning.

As Jesus is tried in the High Priest’s chambers by the Sanhedrin, Nicodemus is surely there. What was he thinking as he heard what he knew to be false accusations and of the way the whole trial was decided before it began?

When the ‘ruling council’ made it’s case to the governor, they said, “We found this man misleading our nation and forbidding us to give tribute to Caesar, saying that he himself is Christ, a king.” (Luke 23:2) And then, of all things, “The Chief Priests were shouting, ‘We have no king but Caesar.’ (John 19:15).

Nicodemus sees the central authority of the Ruling Council commits blasphemy for the sake of their political purposes.

As all of this is happening, what is Nicodemus thinking? What is he doing? What does he say or not say?

V. John 19
There is one more time that we hear Nicodemus’ name used.

But before we get to that, there is another man we need to meet. It’s after Jesus is crucified and has breathed his last. Luke tells us that a man named JOSEPH OF ARIMATHEA got permission from Pilate to take Jesus’ body off the cross and bury it.

Listen to what St. Luke tells us about this man Joseph. “Now there was a man named Joseph, from the Jewish town of Arimathea. HE WAS A MEMBER OF THE COUNCIL, a good and righteous man, who had not consented to their decision and action…” (Luke 23:50-51).

JOSEPH AND NICODEMUS SERVED ON THE COUNCIL TOGETHER. What was their relationship with one another? What kind of conversations had they had together under the cover of darkness?

Both Joseph AND Nicodemus come to the cross TOGETHER to take away Jesus’ body. John writes, “Nicodemus also, who earlier had come to Jesus by night, came bringing a mixture of myrrh and aloes, about SEVENTY-FIVE POUNDS IN WEIGHT.” (John 19:39)

To pack a dead body in spices was the customary thing to do. Luke tells us that the women who arrived on Easter morning brought spices with them for the same purpose. (Luke 24:1) The body packed in spices helped to cover the smell of decomposition.

BUT 75 POUNDS? This is an excessive amount that would have taken several carts to carry. There was certainly nothing ‘secret’ about this visit to Jesus like the first one that was ‘at night.’ This one would have attracted a good deal of attention.

In fact, the only places recorded in the history books where this kind of quantity of spices is ever used to pack a dead body – was when the dead body was that of a KING.

As all of Jesus’ disciples go into hiding for fear of the Ruling Council, Nicodemus, a member of the ruling council comes out of hiding and publicly makes a bold confession that this Jesus is indeed THE KING.

Even before the miracle of Easter, what is clear is that Nicodemus has been born again. His eyes were opened, and he ‘saw’ the Kingdom of God and entered into it.

And now may the peace of God which passes all understanding keep your hearts and minds in Christ Jesus.
Amen.