Posted on July 7, 2019 by Lutheran Church of the Resurrection 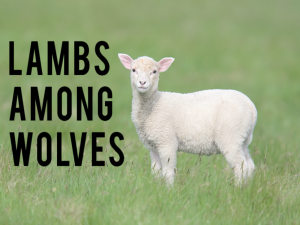 I want to begin by establishing the ‘lay of the land’ as we set out on this journey through the season of Pentecost. Since the Church Year began on the 1st Sunday of Advent, St. Luke’s gospel has been our guide as we follow Jesus. Next year it’ll be St. Matthew’s gospel and after that, St. Mark’s gospel. And in each year of the three year cycle, St. John’s influence is also present.

Each of the four gospels presents the same story of Jesus Christ but each in its own way. Luke has structured and organized his gospel as you would a ‘travelogue.’ Reading Luke’s gospel is like listening to someone tell us about a trip that they took and the various places that stood out as particularly memorable. “First we went here and this is what happened. Then we went there and this is what happened.” (And aren’t we glad that Luke doesn’t make us look at 500 pictures and watch hours of video.)

Luke begins his gospel by recounting the ‘travels’ of Mary to see her cousin Elizabeth, and then Mary ‘travels’ back home to Nazareth. Then there’s the travels of Joseph and Mary to Bethlehem where Jesus is born. Then the ‘travels’ of the shepherds from their fields to the manger. And then when He is 12 years old, the holy family travels to Jerusalem and the Temple where Jesus amazes the Rabbis with His wisdom, and then they ‘travel’ back home again.

Then there’s a big jump that leaps right over 18 years of His life to Jesus’ baptism by John and His Temptation in the Wilderness and the beginning of His ministry. And Luke tells us, “Jesus returned in the power of the Spirit to Galilee…” (Luke 4:14). And for the next five chapters, Luke tells us about all of the particularly important things that Jesus does in the region of Galilee.
• He is rejected in Nazareth of Galilee.
• He heals a man of his demons and cures a centurion’s servant in Capernaum in Galilee.
• He preaches in the Synagogues in Galilee.
• He calls His disciples in Galilee.
• He raises a widow’s son in the village of Nain in Galilee.
• He feeds 5000 in Bethsaida which is in Galilee.
• He’s transfigured on a mountain in Galilee.
It’s quite a ‘slide-show’ that Luke is having us watch.
And then we come to the end of Chapter 9, verse 51, where Luke tells us, “When the days drew near for him to be taken up, he set his face to go to Jerusalem.” From that point, Jesus is on His way to Jerusalem where He will be “taken up” – which is another way of saying that He will be crucified, resurrected and ascend into heaven – which is where His journey began.

For the remainder of this church year, we will be listening to Luke’s ‘travelogue’ on the journey of Jesus to Jerusalem. Along the way, Luke will pepper his report with phrases like,
• “he went on his way through towns and villages, teaching and journeying toward Jerusalem” (13:22); and
• “on the way to Jerusalem he was passing along between Samaria and Galilee” (17:11); and
• “as they heard these things, he proceeded to tell a parable because he was near to Jerusalem…” (19:11).

So, for the rest of this church year, except for the Last Sunday of the church year,’ we’re going to be on this journey to Jerusalem with Jesus – already knowing the outcome of the journey. And every stop along the way is meant to prepare our hearts and our minds so that we will know WHY He must go to Jerusalem, and so that we may rightly rejoice and worship Him when He is “taken up.”

“After this, the Lord appointed seventy-two others and sent them on ahead of him, two by two, into every town and place WHERE HE HIMSELF WAS ABOUT TO GO.”

These men were to be like the angels announcing to the shepherds on Christmas night, “Glory to God in the highest and on earth, peace, goodwill toward man.”
They were to be 72 John the Baptist’s “preparing the way of the Lord,” going ‘door to door’ and ‘house to house’ with their GOOD NEWS.

Jesus tells them, “Whatever house you enter, first say, ‘Peace be to this house… “If a ‘son of peace’ is there, your peace will rest upon him. But if not, it will return to you… Whenever you enter a town and they receive you, eat what is set before you. Heal the sick in it and say to them, ‘the kingdom of God has come near you.’”

“But whenever you enter a town and they do not receive you, go into its streets and say, ‘Even the dust of your town that clings to our feet we wipe off against you.” (Or as we used to say it in West Virginia, ‘choke ‘em in heel dust.)

In the Old Testament we see hospitality at ITS BEST and hostility at ITS WORSE in a town called Sodom. When Lot and his family arrive in Sodom after a long journey, they have no place to stay but they’re invited into the home of, what the Bible calls ‘angels,’ so precious in the sight of the Lord are those who are hospitable to strangers. They feed Lot and his family and give them rest for the night. THAT’S ‘HOSPITALITY.’

But then there’s a knock at the door and the residents of Sodom demand that Lot and his family come out so they may have sex with them. THAT’S ‘HOSTILITY,’ and they are destroyed by fire for it.

As terrible as that is, Jesus tells the 72, “It will be more bearable on that day for Sodom than for that town” that should reject you. And then Jesus begins to recount the towns and villages in the region of Galilee that He had visited done such remarkable things in but who received Him, not with ‘HOSPITALITY’ but with ‘HOSTILITY.’

“Woe to you, Chorazin! Woe to you, Bethsaida! For if the mighty works done in you had been done in Tyre and Sidon, they would have repented long ago, sitting in sackcloth and ashes. And you Capernaum, will you be exalted to heaven! You shall be brought down to Hades.”

And so, as we follow Jesus on His journey to Jerusalem where He will be taken up, we realize that the ‘house’ where He has sent His disciple to announce His word of ‘peace’ is this house right here. Because in just a moment, you will hear the servant sent by Jesus to this house say, “the peace of the Lord be with you.”

And the big question is, ‘how will you receive this good news’– will it be with ‘HOSPITALITY’ or ‘HOSTILITY’?

We wonder, who would ever receive a greeting like this with ‘hostility’? Who would reject the offer of ‘peace’? But of course, this is not the “peace of this world” that the messenger is speaking, but the “peace OF THE LORD be with you.”

Which is not to say that there aren’t far too many houses in which the message proclaimed by the messenger is ‘THE PEACE OF THIS WORLD BE WITH YOU.” As though this is the ‘peace’ that Jesus has accomplished by His being “taken up” and reconciliation with this world is the source of real peace. In the words of the prophet Jeremiah, ‘Woe to you who preach “peace, peace, where there is no peace.” (Jer.6:14).

The “peace of the Lord” is that peace which God has established by the ‘taking up” of His Son, Jesus Christ. NOT by reconciling God to this sinful and fallen world by accepting our sin, but by reconciling this sinful and fallen world to God by forgiving the sin of the world through the all-forgiving blood of Jesus Christ – and by turning hearts and minds to “the way and the truth and the life.”

And so, Jesus is quick to warn these 72 that He is not sending them out as ‘bible salesmen’ to ‘good church-goers,’ but “I am sending you out as lambs in the midst of wolves.” And we all know the one thought that wolves have when a lamb comes knocking at their door is SUPPER.

My fellow wolves, who are, by nature, ‘hostile’ to the One who comes to this house in the name of the Lord announcing “the peace of the Lord be with you always,” show some ‘hospitality’ and say, “Amen!” and say ‘I desire nothing else but to eat your body and drink your blood.’ For this Lamb who has come to this house today, comes to be the Lamb devoured by wolves like us. Because this Lamb is exactly what wolves like us need to eat. For in the eating and the drinking of this “Lamb of God who takes away the sin of the world…” the “peace of the Lord” is not only “with us” but also “in us.”
This is the ‘peace’ that the prophet Isaiah came to this house to announce to us. “For thus says the Lord, ‘Behold, I will extend peace to her like a river, and the glory of the nations like an overflowing stream.” (Is.66:12)

“The seventy-two returned with joy, saying, ‘Lord, even the demons were subject to us in your name!’ And He said to them, (I know, I was watching the whole time). ‘I saw Satan fall like lightening from heaven.’

And then He gives them more power and more promise and resets their hearts and minds so they’re confidence is not based on their power or success “that the spirits are subject to you, but rejoice that your names are written in heaven.”

The ‘seventy-two’ witnessed the TRANSFORMATIVE POWER that is in this simple proclamation – “the peace of the Lord be with this house.” They witnessed the power of that announcement – “I forgive you all of your sins,” to cast out demons and transform lives – EVEN TO TRANSFORM A WOLF INTO A LAMB – a little lamb, who with all boldness and confidence, is willing even lie down with the wolves, just so that they too may be transformed.

And seeing how many wolves there are, Jesus declares that the harvest is plentiful.

And so we go from here knowing that we will be met with both ‘HOSPITALITY’ as well as ‘HOSTILITY’ – because after all, we are ‘DISCIPLES’ who follow our Lord who was received in the same way, and the servant is not above his master.