Posted on December 26, 2017 by Lutheran Church of the Resurrection

Grace and mercy and peace be to you on the Christmas Eve, from God our Father and the baby born of Mary in the little town of Bethlehem. 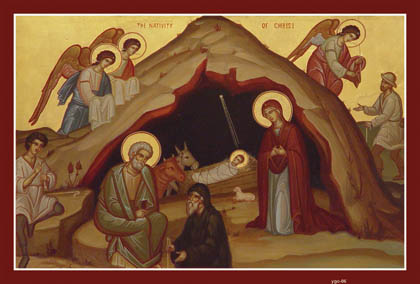 “I bring you good news of great joy which shall be for all the people. For unto you is born this day in the city of David, a savior, who is Christ the Lord.”

This evening, we have come here to hear once again the Christmas story. And as familiar with it as we may be, we never tire of hearing it because of its sublime beauty.

They were like little children who waited anxiously for Christmas day to finally arrive. Their parents and grandparents would have told them the story over and over again about how God had promised that an offspring from the woman would come into this world to crush the head of the devil who had brought darkness and gloom and suffering and death into the world.

Year after year, on nights a lot like tonight, the Old Testament saints 0would have read the Christmas story from the Isaiah’s prophetic telling of it… “There shall come forth a shoot from the stump of Jesse, and a branch from his roots shall bear fruit.” “The people walking in darkness have seen a great light.” “To us a child is born, to us a son is given…”

And all the little boys and girls, and all the big men and women, and all who loved to hear the story and believed it to be true would say, “HOW MANY MORE DAYS ‘TILL CHRISTMAS? WE CAN HARDLY WAIT.”

This is undoubtedly the ‘Christmas story’ that we’re all most familiar with and never tire of telling and hearing.

There was a man by the name of Joseph and his betrothed named Mary. There’s really nothing all that special or noteworthy about either of them really. In fact, the only thing we’re told about them is that both of them could trace their family tree all the way back to David – which put squarely in that line that would lead to the Messiah.

The thing of course that makes this story so unique and beautiful is the fact that Mary is pregnant even while she is a virgin and both she and her betrothed know that the father is none other the Holy Spirit and the child in Mary’s womb is none other than “holy, the Son of God.”

Late in her pregnancy, Joseph and Mary had to travel south, from Nazareth in Galilee to Bethlehem in Judea, because the king wanted to get an accurate count of how many people he could collect more taxes from. Everyone was required by law to register in his ‘home town,’ which for both of them, was Bethlehem.

Joseph and Mary had a hard time finding a place to stay. Lots of people had come from far away to register. Rooms with spare beds were like hens teeth. So Joseph did the best he could for his very expecting wife and found a place to at least escape the elements.

We’re not told how long they were there before the time came for the child to be born. The baby was wrapped in the kind of clothes that babies in those days were wrapped in. Since there was no crib to lay their newborn baby in, one of them must have said that the animal’s feeding trough was just the perfect size and shape and if they could only borrow it for a little while they would be so grateful. So the laid their newborn baby, their “Wonderful Counselor, Mighty God, Everlasting Father, Prince of Peace” in a manger. We can only wonder what the cows and the sheep must have thought of all that.

That same night, some angels in the sky appear to some shepherds who on the outskirts of the town, in the fields watching over their flocks just like shepherds do. It’s night time. But suddenly the sky is filled with so much light that the shepherds are scared out of their wits. One of the angels speaks directly to shepherds. “Don’t be afraid. I bring you good news of great joy which shall be for all the people. For unto you is born this day in the city of David, a savior, who is Christ the Lord.”

And since shepherds back then didn’t have cell phones or GPS, the angel gave them some coordinates, that if the would follow them, they would find the child. And off these shepherds go, leaving their sheep behind, to “see this thing that has happened, which the Lord has made known to us.” And we can only wonder what the sheep must have thought about all of that.

Sure enough, they found the baby, just as the angel said they would. They told their story to Mary and Joseph, and then ran back to their flocks “glorifying and praising God for all they had heard and seen…” And I wouldn’t be surprised if a lot of people in Bethlehem weren’t wakened from their sleep and asked each other what all the racket was about.

That’s the Christmas story that we are all most familiar with. Mary, Joseph, baby Jesus, Bethlehem, angels, shepherds. We usually throw in a donkey, a barn and a very rude innkeeper who didn’t have the heart to make some room for an expectant woman, although none of that is actually in the text at all.

This evening however, we have ALSO heard the Christmas story as it is told, not from the perspective of those who lived beforehand or from those who were eyewitnesses to the actual event itself, but from a transcendent perspective that connects together the past with the present and the future into the eternal and infallible will and purpose of almighty God Himself.

Of course, it’s all one and the same story. But this is the cosmic story of Christmas that no one who lives in time and space and human history could ever begin to imagine unless God Himself told it to us. Only God, who was in the beginning, can tell us that the baby born to Mary in Bethlehem is none other than the eternal Word through Whom the world was created.

Tonight, we hear the incredible story once again that the baby born of Mary is not simply a special child, but that this baby is God Himself. Mary is not just the mother of Jesus but she is the mother of God. The One who orders the history of the world from the first day of creation to the last day of the world, entered into history when the time had fully come. The infinite is contained in the finite.

So, when we are told that the baby born of Mary was in the beginning, and the One through whom all things were made, let us also to see that this child wrapped in swaddling clothes and lying in a manger is the One through Whom God is making all things new.

In the beginning, God created His ‘very good’ world FROM THE OUTSIDE IN, BY SPEAKING DOWN UPON IT. “Let there be light. And there was light.” But Christmas is the new beginning, when God makes all things new FROM THE INSIDE OUT, BY SPEAKING FROM WITHIN IT. The baby wrapped in swaddling clothes and lying in a manger is “The Word became flesh and dwelling among us.”

By His coming into His creation, by taking on our humanity and living in the course of time and space, we see that He has no intention of destroying His creation and starting all over again. That would have been the easier and far less painful thing for Him to do. Rather, He enters into it. For His intention and desire is to renew and redeem it from the inside – one person at a time.

Those swaddling clothes that He is wrapped in at His birth, are the sign of the grave clothes that He will be wrapped at His death. The manger He was laid, in is a sign of the tomb that He will be laid in. The new beginning that God began when the Holy Spirit overshadowed the virgin Mary is accomplished when the baby she gives birth to cries from the cross, “It is finished.”

This is the Christmas story – anxiously anticipated in the Old Testament, that came to pass in the New, that continues in the hearts of minds of us here tonight. God has become man to redeem all men and women. And that includes you and me and all people – the past, the present and the future – all meeting together in this baby born in Bethlehem – “For unto YOU is born this day in the city of David, a Savior, who is Christ the Lord.”