Posted on May 11, 2018 by Lutheran Church of the Resurrection 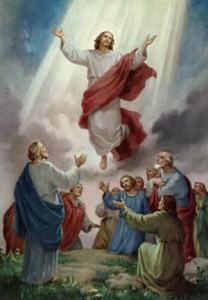 It’s a circuitous route our Lord travels in His mission to redeem the world. He who, from eternity, sat at the right hand of God the Father, DESCENDED. He came down from heaven and became man, and died on the cross, and rose again on the third day, and 40 days later, He ASCENDED into heaven to resume the position that always was His, always is His, and always will be His.

Or as He Himself put it, “I came from the Father and have come into the world, and now I am leaving the world and going to the Father.” (John 16:28).

All of this He has done out of perfect obedience to His Father, to glorify His Father, and to redeem you and me and His whole creation. It had to be an ‘inside job.’ No ‘waiving magic wands’ over the world and ‘magical incantations’ would do. But there was clearly no ‘insider’ to get the job done. And there still isn’t.

So God came down and entered His own creation as the ‘consummate insider.’ He became one of us – FOR US and for our salvation.

Christ our Lord took on our humanity FOR US. He was crucified and raised FOR US. And now, he has ascended into heaven FOR US.

By His incarnation and passion, God has shown us His love FOR US and poured out His love into our hearts. By His resurrection from the dead, He has ASSURED our hearts and strengthened our faith. And by His ascension into heaven, our Lord has given us the sure and certain hope that we shall indeed be with Him where He is and we see Him as He is.

The Good Shepherd leads His flock and brings them home. He goes ahead – and His sheep follow.

I. He Blessed The Disciples.
It all happened 40 days after Easter, just as He had said it would. On that day, “…he led them out as far as Bethany, and lifting up his hands he blessed them.”

In his gospel, Luke places the ‘beatitudes’ immediately after his list of the 12 apostles, as if to say, the first thing that Jesus does when He chooses these 12 men is to bless them. Luke writes, “And he LIFTED UP HIS EYES on his disciples, and said, ‘Blessed are you who are poor, for yours is the kingdom of God. Blessed are you who are hungry now, for you shall be satisfied…” And so on.

Now, as He is about to depart from them in the flesh, He “blessed them” again. But here, instead of “lifting up HIS EYES on his disciples,” “he lifted up his HANDS and blessed them.”

These are the hands that touched the eyes of the blind and the tongue of the mute and gave sight and hearing and speech. With these hands, He reached out to touch the lifeless hand of a little girl, and a mother’s only son and gave them back to their parents.

We remember that moving scene when, after a full and busy day, Luke reports that “when the sun was setting, all those who had any who were sick with various diseases brought them to him, and HE LAID HIS HANDS on every one of them and healed them. And demons also came out of many.” (Luke 4:40).

These are the hands that reached out to grab hold of Peter as he was drowning in the stormy sea. With these hands, He took bread, gave thanks and broke it and fed 5000 and 4000. He held these hands out to Thomas and dissolved all his doubt.

But the Apostles don’t react like that all. Instead of being sad and teary eyed, we read, “They worshipped Him and returned to Jerusalem with GREAT JOY, and were continually in the temple blessing God.”

In all four gospel accounts of THE RESURRECTION, there is hardly a mention that those to whom Jesus appeared responded with “GREAT JOY.” At His resurrection, they were ‘amazed,’ ‘afraid,’ ‘frightened, thinking that they saw a spirit,’ and ‘disbelieving for joy.’

It’s only here, “as He parted from them and was carried up into heaven” that, for the first time, we hear that they were filled with that “great joy” that Jesus had promised they would have.

“You will sorrow but your sorrow will be turned to joy.” “I will see you again and your hearts will rejoice and no one will take your joy from you. Ask that you may receive and your joy will be made full.” (John 16).

This “great joy” “mega chara,” that filled the Apostles is attributable to at least to one more thing. In his Acts of the Apostles, Luke tells us that “as they were looking on, he was lifted up, and A CLOUD took him out of their sight.”

He could have simply ascended to such a height that He disappeared in the distance as a missile does when it’s launched into outer-space. But “a cloud took him out of their sight.” And we realize that we have seen this ‘cloud’ before.

Though He was “taken out of their sight,” the Apostles now ‘see’ with different eyes. They understand that He remains PRESENT with them – HIS ‘NEW ISRAEL’ – just as He was with ‘OLD ISRAEL.’ He is fulfilling His promise to them, “Lo, I am with you always, to the end of the age’ in a way that He could never have done if He remained in time and space.

By His ascension into heaven, our Lord is present with us who are still bound by time and space. We see His presence with us in the water of Holy Baptism and the Bread and Wine of Holy Communion with eyes that have been opened by the Holy Spirit. We hear His voice speaking to us through His servants who speak in His Name and whose hand rests upon our head to bless us – “I forgive you all of your sins.”

In this ‘seeing’ and ‘hearing’ and ‘touching’ we know that He is present with us and leading all who follow Him, to the Promised Land.

Christ our Lord, is NO BODILESS HEAD, even as His Holy Bride is NO HEADLESS BODY. The Ascension of Christ is the place where the church on earth is united with the church in heaven. In the THE ONE, incarnate, crucified, risen and ascended BODY of Christ, the Church Militant sings the victory song together with the angels, archangels and all the company of Church Triumphant in heaven.

II. He Leads The Way
“As they were gazing into heaven as he went, behold two men stood by them in white robes and said, ‘Men of Galilee, why do you stand looking into heaven? This Jesus, who was taken up from you into heaven, will come in the same way as you saw Him go into heaven.”

It took the help of the holy angels to explain these things – just as it had at His conception and birth and resurrection.

Just as the life of Jesus began with the angel’s announcement to the shepherds in the fields, “Do not be afraid. I bring you good news of GREAT JOY that will be for all peoples,” (Luke 2:10), so this promised is fulfilled at His Ascension.

The angels also inform us that the ‘ascension of our Lord’ is closely connected to the second coming of our Lord. “He will come again in THE SAME WAY as you saw Him go into heaven.” As He ascended BODILY, so He comes again BODILY.

Jesus will come again, in the body that was conceived by the Holy Spirit, born of the virgin Mary, suffered under Pontius Pilate, was crucified, died, buried and raised again on the 3rd day and with which He ascended into heaven, even as He comes to us BODILY in His Baptism and Holy Supper and Preaching – NOW to forgive you for all of your sins – THEN to judge the living and the dead.

That the judge of all things is Jesus Christ is surely good news for all those whom He has blessed and who “worship Him and bless Him.” It should fill our hearts with “GREAT JOY” even as it did those who “saw Him go into heaven.”