Posted on February 24, 2020 by Lutheran Church of the Resurrection 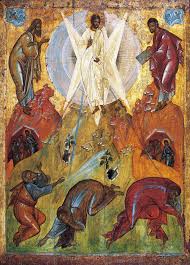 Anyone who has ever visited Acadia National Park and driven the “Loop Road” knows what a ‘scenic pull-over’ is. It’s a place where the view is unobstructed and beautiful. We used to call them “Kodak spots.” But not everyone knows what “Kodak” is anymore. The signs all say that you really should ‘pull over’ and catch this view.

Today, the Christian Church on earth stops at a ‘scenic pullover’ to catch this view of its Lord. The Transfiguration of our Lord is the unobstructed view of the Son of God in His glory.

Like Peter, James and John, we wish that we could stay forever. And in fact, one day, we will. This is the view of Jesus that Church Triumphant in heaven has all the time and it never gets old and it’s never time to move on.

The Season of Epiphany, which literally means “to shine brightly,” comes to its climatic conclusion today. If we haven’t yet beheld, what St. Paul describes as “the glory of God in the face of Jesus Christ,” today we do. (2Cor. 4:6).

“And after six days Jesus took with him Peter and James, and John his brother, and led them up a high mountain by themselves. And he was transfigured before them, and his face shone like the sun, and his clothes became white as light.” This is the solar face of Christ. From His face is emitted more light than all the suns in the universe put together.

By His own testimony, Jesus once declared, “I am the light of the world. Whoever follows me will not walk in darkness but will have the light of life.” (John 8:12) John, who was there on the mountain, would later report in his Revelation that the “heavenly Jerusalem” “has no need of sun or moon to shine on it, for the glory of God gives it light and the lamp is the Lamb.” (Rev. 21:23)
As Jesus leads the three disciples from below, Moses and Elijah come down from above, and THE TWO MEET TOGETHER IN JESUS. Heaven and earth meet together in Jesus. It happened on the holy mountain then just as it does right here at this altar when the angels, archangels and all the company of heaven meet the saints from below in the body and blood of Jesus.

And Peter said to Jesus, “Lord, it is good that we are here.” Never has there been a greater understatement in all the Scriptures than that which Peter states here. It is what all the saints in heaven are set free to say in words and song that can never be overstated.

But here today, we are given a glimpse of Easter and the victory that awaits the faithful who will share in the victory of our Lord over sin, death and the devil.

Peter wanted to pitch three tents, one for Jesus, one for Moses and one for Elijah.

In the Old Testament, as the people of Israel made their journey to the Promised Land though the wilderness, they would put up a tent for God to live in. And the glory of God was present in the Tent. For Israel making its way through the wilderness, it was always comforting to know that God was with them and where they could find Him.

Now, the glory of God is still located in a tent. Jesus Christ is the tent made of skin in which God is present with us and where God Himself can be found. So, was John thinking of the Transfiguration and Peter’s offer to put up some tents when he writes, “And the Word became flesh and ‘tented’ among us, and we have seen his glory, glory as of the only Son from the Father, full of grace and truth.” (John 1:14)

So, what was Peter thinking with his offer? Whatever it was, it would have been better for him to remain silent. But Peter just has to say SOMETHING and build SOMETHING. But GOD CUTS HIM OFF. God is the One who has got something to say and when it comes to providing a tent – He has already done that. “He was still speaking when, behold, a bright cloud overshadowed them, and a voice from the cloud said, “This is my beloved Son, with whom I am well pleased; listen to him.’ When the disciples heard this, they fell on their faces and were terrified.”

There is something strange and remarkable going on here. In the presence of Moses and Elijah and the transfigured Jesus and His face shining like the sun, they seemed perfectly relaxed. They wanted to ‘hang out.’ “Let us build three tents…” But now, as the cloud overshadows them and the voice from the cloud declares what is most true – “This is my beloved Son, with whom I am well pleased. Listen to Him” – “they were terrified.”

When Moses heard the voice of God that came from the burning bush, he was afraid and hid his face. When Elijah stood on the cleft and God passed by him, Elijah covered his face. But now, these two Old Testament heroes hear the voice of God from the overshadowing cloud in the peace of God because they know who Jesus is and what He has come into this world to do.

But the three men do not yet know this – or do not yet believe this. Here is what our life before God the Father looks like apart from faith in God the Son. Apart from the Son of God, there is only sheer terror in presence of God. Only through the Son, who has atoned for our sin and made us righteous and holy before God and who invites us to call upon Him as dear children call upon their dear Father- only through this Son of God do we have ‘peace with God.’

The voice of the Father declares the final word when it comes to His beloved Son – “listen to Him.”

No sooner do these three sinners fall on their faces in terror, than we read, “But Jesus came and touched them, saying, ‘Rise, and have no fear.’” In Him, we have have “peace with God.”

And when they lifted up their eyes, they saw no one but Jesus only.” No radiant face, no Moses and Elijah, no bright cloud, no voice from the cloud. “Jesus only.”

It’s like that for us too. No visions. No voices. No miracles or signs and wonders. “Jesus only.” “Only” His Word. “Only” His Baptism. “Only” His Supper.

There was a time when Peter would not LISTEN to Jesus. On the road to Caesarea Philippi, Jesus had told them all that He must be betrayed into the hands of the Jews and the Gentiles and suffer and die and rise again from the dead. “And Peter took him aside and began to rebuke him, saying, “Far be it from you, Lord! This shall never happen to you.” (Matthew 16:22)

Rather than ‘listen’ to His Lord, Peter wanted to force his own thoughts and ideas and plans onto Jesus. And aren’t we all guilty of the same? When God’s ways are not our ways we have this habit of correcting Him rather than ‘listening’ to Him. “God, you don’t know what you’re talking about.” “God, you need to listen to me!”

It’s the same for us. His word to them is meant for us too. “Rise, have no fear.”

I know that sometimes it that’s not enough for us. We think we’d like to have something spectacular to base our faith on – ‘a miracle or vision’, an ‘sign,’ a ‘transfiguration.’ But our assurance comes to us under plain and simple word and water and bread and wine. That’s as spectacular and glorious as it gets – for now. But in each form of these ‘means of grace,’ the word of our Lord is the same – “Rise, have no fear.”

And the truth is, that’s enough. We don’t need to see what they saw. It’s enough for us that they saw it. We believe their word. “For we did not follow cleverly devised myths when we made known to you the power and coming of our Lord Jesus Christ, but we were eyewitnesses of his majesty.”

The day will come when our Lord will come again IN ALL HIS GLORY, the same glory as displayed on the Holy Mountain, and every eye will see Him just as Peter, James and John did on the mountaintop. But until then, “You will do well to pay attention to the Word, as to a lamp shining in a dark place, until the day dawns and the morning star rises in your heart…”

For that very brief time, the three disciples experienced what it means to live by sight and not by faith. The “saw the glory of God in the face of Jesus Christ.” They saw Jesus just like Moses and Elijah and all the company of heaven see Jesus even now.

But for us, for now, the glory of God in Jesus is covered up and hidden from our eyes. All that we see is what we are given to see – the crown of thorns, the blood, the sweat, the nails. All that we hear is what we are given to hear – the screams of pain and the “I thirst” that knows no relief, the agony of drawing even a breath, the last tormented cry, “My God, my God, why have you forsaken me.” And, no VOICE FROM THE CLOUD, no touch, no comforting word, “rise, have no fear.”

Here is what we ARE given to hear and to see. And frankly, it’s not the sight of His glory that moves me so much as it is the sight of Him hanging from the cross FOR ME and FOR YOU. On the cross, I see neither His glory nor His power. But I see in unmistakable clarity, His love for me. And it is that which compels me to “listen to Him.”