Posted on February 26, 2012 by Lutheran Church of the Resurrection

Click play to listen to the audio version of this sermon.
[audio:sermon-2-26-12.mp3] 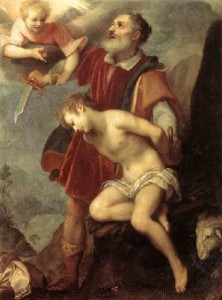 The life of faith is really a very difficult, if not sometimes a terrible life really. Anyone who says that all of their problems went away when they became a Christian is either lying or hasn’t got a clue what it means to live by faith and follow Christ.

I think this is why some who come to church with their great problems and troubles, are often terribly discouraged and disappointed and don’t last long. They thought that Christianity was supposed to make them feel better about themselves. But then they see what it really means to live by faith, and they conclude that this is not what they thought it was and not something that they’re interested in.

Don’t ever tell someone with problems that all their troubles will go away if they come to church and hear the gospel. No. FAITH comes by hearing the gospel- not easy street or prosperity or relief from all your problems. In fact, truth be told, once the Holy Spirit works faith in your heart, your troubles have just begun.

Trust in self must be replaced with trust in God ALONE. I must learn that all the big and little securities that I worship are false-securities and learn to “count everything as loss because of the surpassing worth of knowing Christ Jesus my Lord.” (Philip. 3:8)

The Lutheran pastor, Dietrich Bonhoeffer described the Christian life about as realistically and honestly as it can be put. “When Jesus Christ calls a man, saying ‘come, follow me,’ He calls him to come forth and die.”

So, why do we do it? Why do we strive to follow Jesus and why do we desire to be called a Christian? And why would we ever think that this would be good for our friends who do not know Jesus Christ? Not because it’s easy, not because it’ll make you feel good, not because it’ll solve your problems – please. Nothing could be further from the truth. Don’t kid yourself and don’t deceive your friends.

“After these things, God tested Abraham.” See. That’s what God does to those whom He calls. He tests them. When God tests us it always means the same thing – something must die. It wouldn’t be so bad if God tested our knowledge of the faith. Then we could prepare by reading the right books and memorizing the right verses of scripture. We could get God off our back with right answers.

But God’s tests are always tests of faith. It’s always about what you do when you have no answers and nothing makes sense and you can’t see how this is going to end. Do you trust God with your whole heart and mind and soul and command your body to obey His Word even though you don’t get it – even though you don’t see the point?

And Abraham said, ‘Here am I.’” God said, “take your son, your only son, Isaac, whom you love, and go to the land of Moriah, and offer him there as a burnt offering on one of the mountains of which I shall tell you.”

Ask Abraham about the life of faith. You think he’d tell you it’s great, easy, fun?” You think when Abraham comes away from a meeting with God he says, “I feel so peaceful and relaxed.” God’s call to Abraham will tear him apart.

It’s like that with us too. When God tests us, we never know that it’s just a test. We never know how it’s going to end. We must simply trust in God.

Abraham was told by God that he must sacrifice his son, his only son, “whom you love.” What emotions are stirred in the way God puts the demand. He could have just said, “the boy,” or “the kid.” As God pounds out the adjectives, we can almost hear Abraham’s heart breaking.

What thoughts must have been going through Abraham’s mind. “This is totally unreasonable. This makes no sense at all. What kind of God is this who would ask this of a father? And besides, Isaac is the one through whom God promised to bless the world. Not only would he lose his only, dearly beloved son, but now God appears to be a liar. God had told him, “Through Isaac shall be your offspring.” And now God said, “kill Isaac.”

Isn’t it right about at this point that most of us would say, ‘this is all very nice, but to be honest, this is a lot more religion than I was looking for. Frankly, I thought that it would be nice to come to church, good for the kids. We just wanted to add a little ‘spirituality’ to our ‘worldly’ lives. But really, I don’t want this much God in my life. Thank you anyway.
“So, Abraham rose early in the morning.” What an understatement that is. We would be more surprised if Abraham slept at all that night. Without delay or procrastination. Abraham doesn’t say, ‘well let me pray on it Lord,’ he saddled the donkey, recruited to young men to help, gathered the wood that he’d need for the burnt offering and his only, beloved son, Isaac, “and went to the place that God had told him.”

“On the third day ABRAHAM LOOKED UP and saw the place from afar.” If you’ve ever traveled out west by car you know that as you come across the great plains of the mid-west, you get to a certain point when suddenly there appears in front of you the Rocky Mountains. And it’s an exhilarating thing to see. As Abraham looked up and saw the mountains of Moriah, his heart must have broke again.

Luther says that in that moment, everything within Abraham died. Sarah, his family, his home, his son. This is what it is to sit in sackcloth and ashes. If he had only known that this was only a test, then he wouldn’t have been so troubled. It’s like that for us too. When we are in the midst of our trials, we cannot see the end to them and we don’t know how they will turn out. We can only trust in God to deliver us and that He is killing us so that He may raise us up again.

From this point on it would only be father and son. The servants would go no further, they would never understand. Abraham’s strict instructions to them were as follows, “stay here with the donkey while I and the boy go over there. (Pointing to where he is headed). We will worship and then we will come back to you.” What a strange thing to say, “We will come back to you.” What was Abraham thinking?

What else could he have been thinking but that if God said, “through Isaac shall your offspring be,” then God would raise Isaac from the ashes. Abraham believes in the resurrection of the dead.

“And Abraham took the wood for the burnt offering and laid it on Isaac, his son. And he took in his hand the fire and the knife. So they went both of them together.” Isaac offers no resistance – but must not have understood what kind was going on. He sees the wood and the fire and the knife, everything carefully accounted for. But he sees no animal to sacrifice. And so he asks, “Father, where is the lamb for a burnt offering?”

Abraham could have said, “You are the lamb my son, my only son, whom I love.” But he couldn’t do it. The best he could do was to say, “God himself will provide for Himself a lamb.” And again we read, “So they went on, the two of them together,” the son, carrying the wood on which he will be killed.

When they came to the place of which God had told them, Abraham built the altar there and laid the wood in order and bound Isaac his son and laid him on the altar, on top of the wood.”

Sadly, the conversation between the two is not included. We can only imagine. Abraham finally had to explain things to Isaac. And Isaac must have protested, “Have you forgotten: I am the son of the promise and through me God will dispense his great blessings.” And Abraham must have answered that God would fulfill His promise, somehow, even out of his death. And Isaac must have consented. There is no sign of a struggle. The son goes willingly in perfect obedience to his father.

It’s worth just pausing here for a minute. Besides the by now, obvious fact that Isaac is giving us a preview of Jesus, the greater than Isaac, notice how Isaac also shows us the meaning of the 4th Commandment. This is what it means to honor your father and your mother.

And notice this too. Can you imagine the impression that Abraham’s actions must have had upon his son? What faith in God Isaac must have seen in his father. Long after Abraham was dead, Isaac would remember his father’s devotion to God. How many of us father’s can hope to think that our sons and daughters will see the same in us as Isaac saw in his father?

Now, the time had finally come. ‘Then Abraham reached out his hand and tool the knife to slaughter his son.” Luther says, “If God had slept for an instant the boy would be dead… Never in all history was there such obedience, save only in Christ. But God was watching, and so were the angels. See how God is at hand in the hour of death.”

“But the angel of the Lord called to him from heaven saying, ‘Abraham, Abraham.’ And once again Abraham, “Here am I.” Almost as if to say, “now what!” And he is told to put the knife down, the test is over.

And God said, “Do not lay your hand on the boy or do anything to him, for now I know that you fear God.” How does He know? “Seeing you have not withheld your son, your only son from me.”

Now this bothers us to no end. Surely God could have looked into Abraham’s heart and seen the faith that the Holy Spirit had 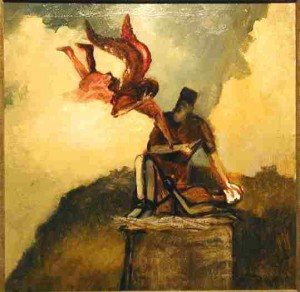 created there without putting him through this living hell. We want God to just look inside us and see our faith. But God looks at what we do as the evidence of our faith. Faith without works is a dead faith. It’s not our works that save us before God. But let’s not kid ourselves. Our works are the outward evidence of the internal faith we have.

Here dear Christians, is the goal of every test of faith that God puts to us. That we would lift up our eyes, and see the Lamb, whose head is caught in that crown of thorns, whom His Father has bound to the wood, and NOT sparing His Son, His only Son, whom He loves, sacrificed Him in our place.

We do know how every test of faith will end. “For He who did not spare His own son but gave him up for us all – how will he not also with him graciously give us all things.” (Rom. 8:32).