Posted on April 19, 2016 by Lutheran Church of the Resurrection 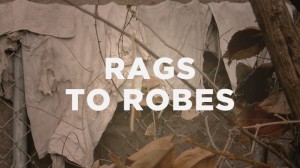 One of the elders has a question for us this morning. “Who are these, clothed in white robes, and from where have they come?” He’s pointing to a multitude of people who are gathered around the throne of God and the Lamb. They’re “crying out with a loud voice,’ Salvation belongs to our God who sits on the throne and to the Lamb!”

“Who are these?” It’s hard to tell if John should know THESE or not. Some questions are not meant for us to actually answer but only to help us to realize what questions we actually should be asking.

This is not a scene that John has ever seen. And neither have we. This is the one, holy, Christian church as we’ve never seen it.

The only church we’ve acquainted with is the one that argues amongst itself over position and power and “who is the greatest in the kingdom.” The only picture of the church that we’re familiar with is one that hardly gathers around the throne or stands before the Lamb and if 30% of the flock is present we call it a good day.

The picture of the elect, clothed in white robes, is completely foreign to us. All we have ever seen are the survivors of the zombie apocalypse, clothed in filthy rags, all tattered and torn from the daily battle for survival in a hostile world.

If the elder were to ask us, “who are these,” pointing to the flock of weak and wounded sheep that are making their way through this life, we would have little trouble identifying them. These are spouses, children, parents, friends, people sitting right next to me in this pew. And I’m there too. That’s me.

But “who are these clothed in white robes and from where have they come?” John’s only answer is, ‘Sir, you know.” And the elder answers his own question, not for his sake for but for ours, “These are the ones coming out of the great tribulation. They have washed their robes and made them white in the blood of the Lamb.”

It’s the same flock of sheep as we’ve just identified, but no longer living under the shadow of death. They have ‘come out of the great tribulation’ and now they live in the eternal light of the world who has overcome death and the grave by His own dying and rising from the same.

These are the “children of promise” according to the word of the Lord to Abraham when He said, “I will make your descendants as numerous as the stars in the sky and as the sand on the seashore.” Here they are, “a multitude that no one could count.” (Gen. 22:17)

These are the TRUE Israelites, the PEOPLE OF GOD, set apart by God for Himself, from every time and place, from Old Testament and New, from the 1st day to the last day, to be the ONE, HOLY congregation of SAINTS – holy ones, whom God delights in calling “my people” and who delight to call Him, “my God.”

We dare not try to pick out the Lutherans in this multitude. There aren’t any. In fact, no one in this multitude ever heard of Lutherans – or Catholics or Baptists or Methodists or Presbyterians either. There are no denominations in heaven. It’s either FAITH IN CHRIST who is coming to redeem the world from sin, death and the devil OR FAITH IN CHRIST who has come into the world and given His life to save us from sin and death and devil. That’s all there is to it.

This is the flock of sheep who “hears the voice” of the Good Shepherd who says, “I know them.” “I knew you before I formed you in the womb.” “I knew you before you were born.” To be ‘known by Him’ means that you belong to Him and He calls you ‘mine.’ To those who are not His, He says, “Depart from me. I never knew you.”

His sheep hear His voice and “follow Him.” Many will not believe what they hear. They will debate and offer all kinds of reasons to doubt. They will demand to see signs of proof – but ignore the one sign that proves that everything He says is true.

But His sheep hear His voice and “follow Him.” They hear Him say, “I give them eternal life, and they will never perish, and no one will snatch them out of my hand.” And they believe Him, and trust that He will do exactly as He has promised – not because they are good – but because He is good. And they ‘follow Him’ and he leads them THROUGH all the trials and troubles and tribulations, through the crying and sighing and dying. He does not offer them a way to ESCAPE any of it – but only to lead them THROUGH it all safely – to ETERNAL LIFE.

That sure is a different picture of the Church than the one we’re familiar with where we’re still slogging it out, ‘fighting the good fight of faith’ that can get pretty tiresome and pretty ugly and is full of disappointments and it’s painful.

The Good Shepherd leads His flock THROUGH the GREAT TRIBULATION where the battle is being waged against His flock – both from the outside and from within.
 Subtle temptations that seem so harmless, but which cause an infection that grows and spreads until it has taken us over and separated us from Jesus and need to be constantly fought off with regular doses of confession and absolution.

 Seductive allurements of the flesh, that entice us to mute the Shepherd’s voice just for a brief moment of pleasure, and then moments turn to hours now we don’t care that we’re breaking His commandments, we’re hooked – and we need to be detoxified with strong doses of the Law that shows us our sin and the death it inflicts on us – and strong doses of the Gospel that gives forgiveness and a new beginning and REAL PLEASURE.

 Threats that if we actually act on the convictions of our heart that His Word has formed in us we will pay a price and the price will be high.

 Physical pain, illness, disease, suffering, the fear of death. And always the voice of the serpent whispering in our ear, “did God really say… no one will pluck them out of my hand… I will give them eternal life and they shall never perish.” “Where is your God anyway?” “Maybe He’s sleeping or maybe He’s given up on you or maybe He doesn’t really exist.”

And so we need to have His very body pressed into our hands and His very blood pressed onto our lips that we would once again REMEMBER WHO WE ARE AND WHOSE WE ARE and in REMEMBERING continue to FOLLOW HIM.

The Church Militant is the church at war against the forces of evil in the world and in ourselves. And wherever there is war, there are casualties. And some of those casualties are sons and daughters, fathers and mothers, good friends. Every single one of them one for whom the Good Shepherd has given His life for.

And so the flock of Jesus knows sorrow and suffering and pain of the worse kind. It weeps because it sees many who grow weary of the battle and give up the fight. It cries because it see lives that have been damaged and ruined in the battle. It knows the weeping and mourning that are born of disappointment and grief.
This is the church we recognize. We know who they are. It’s you and me, huddled together in this sanctuary, to “hear the voice of our shepherd,” that our troubled hearts may be comforted and our doubts may be dissolved and our faith may be strengthened and that we may “follow Him” because He has promised to give us “eternal life.”

This morning, we are given the encouragement of ‘seeing’ the goal of our faith. It’s a ‘seeing’ that is done not with the eyes but the ears. We are given to ‘see’ those who have “come out of the great tribulation.” And in seeing them, we see our destiny.

This is the Church Triumphant which is the same as the Church Militant, only now the warfare is over. The victory that even now has been won in the Resurrection of Jesus Christ but that is known to us now, only by faith, will be FULLY KNOWN by us even as we are already FULLY KNOWN by God.

The Shepherd of the sheep has become the Lamb who was slain, that His precious little lambs might not die but live. He lays down His life only to take it up again on the 3rd day, riding into heaven with His beautiful wounds, in which He had hidden every single one of His sheep. “See Father, no one has snatched them out of my hands just as no one has snatched them out of yours. For we are one.”

The Good Shepherd has brought His flock into eternal life. What seemed to us to be a small and pathetic flock of wounded and weary sheep, turns out to be a GREAT MULTITUDE that has CONQUERED THE WORLD simply by listening and following the One who died and was raised from the dead.

They were filled with all kinds of doubts and fears and were always wandering away in search of greener pastures, but now they STAND and boldly confess with loud voices, “Salvation belongs to our God who sits on the throne, and to the Lamb!”

They were clothed in filthy rags all tattered and torn, but they have been washed in the blood of their Shepherd who has purified them and made them clean and holy and pure.

“The serve Him day and night.” Not with drudgery and reluctance but with perfect joy that our worship here today is just a type of.

John sees the flock of Jesus which existed in time and space, both ‘coming out’ and ‘entering in.’ It’s “a great multitude that no one can number” both because it is so large, and because it is still growing.

So dear sheep, be bold and brave and continue to listen to the voice of your Good Shepherd and follow Him. Don’t be afraid as you fight the good fight to say NO to sin and YES to His ways. Encourage one another as we make this journey together. Let us keep our eyes fixed on Jesus, because He has said, “no one can snatch them out of my hand.”

Warning: count(): Parameter must be an array or an object that implements Countable in /nfs/c01/h07/mnt/14625/domains/lcrwtvl.org/html/wp-includes/class-wp-comment-query.php on line 399