Posted on May 15, 2016 by Lutheran Church of the Resurrection 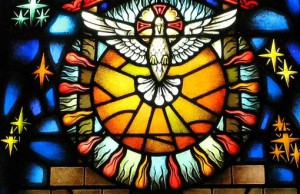 Of all of the great holidays on the church’s calendar, the Day of Pentecost may well be the most mysterious of them all:
On Christmas, we celebrate the birth of a baby. We know all about that. Happens all the time.
On Good Friday, we celebrate the death of that same baby now a man. Death is something that we’re very familiar with.
On Easter we celebrate the resurrection of that man from the dead. A bit more mysterious maybe but we see it all the time, particularly around this time of year as the flowers and grass and leaves that died in the winter come to life again in the spring.
On Ascension we celebrate the bodily ascension of our Lord out of sight. But we’ve gotten so used to flying by now.

But the day of Pentecost? What are we to make of that? The SOUND “like a might rushing wind” that’s all sound and no wind and comes from within the “house where they were sitting.” “Tongues as of fire appeared to them and rested on each of them. And they were all filled with the Holy Spirit and began to speak in other tongues as the Spirit gave them utterance.” And a fisherman preaches and the crowds shouts, ‘SAVE US.’ And 3000 are drown and die while they’re still alive and are raised from the dead before they’re buried.

It’s all pretty mysterious. How do you explain it?

That was the question of those who were there. ‘And all were amazed and perplexed, saying to one another, in good Lutheran style, “what does this mean?”

Some wanted to take the MYSTERY out of it by giving a perfectly rational explanation. “They are filled with new wine.” Ever notice how often we try to take the ‘mystery’ out of the ‘mystery.’ We’re always trying to EXPLAIN things and solve the MYSTERY. Because if it remains a MYSTERY, then we have to admit that it just might be bigger than we are, and we don’t like that. Explaining it gives us some sense of control over it.

Peter squashes their perfectly rational explanation by adding MYSTERY on top of MYSTERY. “This is what was uttered through the prophet Joel: And IN THE LAST DAYS it shall be, God declares, that I will pour out my Spirit on all flesh…”

Did you catch that? Joel said that “God said I will pour out my Spirit on all flesh… IN THE LAST DAYS.” So, the Day of Pentecost is the big kick off to the ‘LAST DAYS…’ When you see the SPIRIT POURED OUT ON ALL FLESH, God is wrapping up the work that He completed on Good Friday and Easter Sunday.

The Day of Pentecost was the FIRST DAY OF THE ‘LAST DAYS’. It’s the BEGINNING OF THE END TIMES. We’re not told when the LAST DAY will be. But we are told we’re not to worry about it or even waste time trying to figure out when it will be. It’s enough to know that we’re somewhere between the Day of Pentecost and the Last Day and that the Holy Spirit is busy wrapping things up and getting everyone ready for THE BIG MOVE.

This is the TIME OF PENTECOST. The time for God, the Holy Spirit to do His PARTICULAR work.

God the Father did His PARTICULAR work when He created the world and sent His Son into the world to redeem it by atoning for the sin of the world.

And the Son has done His PARTICULAR WORK by doing what the Father sent Him into the world to do. He redeemed the world by giving Himself as the ‘once for all offering for sin.’ And when His PARTICULAR WORK was finished, He Ascended into heaven where He continues to direct the course of events during these last days for the benefit of all who believe.

Now, the PARTICULAR work of the Holy Spirit is to connect men and women, boys and girls to Jesus Christ and all that He has done for them. Because the truth is, unless that connection is made, the work that Jesus Christ accomplished, is all in vain.

think of it like this. On January 1, 1863, President Abraham Lincoln signed the ‘Emancipation Proclamation.’ As soon as he put his signature to that document every slave in this country was a free man.

But the sad truth is, for many, many slaves, nothing changed. And nothing changed for one of two reasons.
a) How many slaves do you think never knew what had been accomplished on their behalf – BECAUSE NO ONE EVER TOLD THEM? And no one told them because the word was kept locked up so that it wouldn’t get out reach those to whom it may concern.

And which ever the case might be, they continued to live as slaves – even though they had been set free. EVERYTHING HAD CHANGED BUT FOR THEM, NOTHING CHANGED.

It’s like that for us too. The work that Jesus Christ accomplished by His cross and His resurrection and His ascension – didn’t change us at all. Not one bit.

The One who was changed, if we dare put it that way, was God the Father. The Father’s attitude towards us and His whole creation was changed from WRATH AND ANGER at the mess we made of His VERY GOOD to MERCY AND FORGIVENESS because His beloved Son made it all RIGHT and VERY GOOD again. He took our sin upon Himself AS THOUGH IT WERE HIS, and just was done to Him AS THOUGH HE WERE US.

And the Emancipation Proclamation that sets free has been signed with the blood of Jesus Christ – and if the Son sets you free, you shall be free indeed.

This is the PARTICULAR WORK OF THE HOLY SPIRIT. He makes the CONNECTION between you and your Lord and tells you that it’s all a GREAT MYSTERY but it’s all TRUE and it’s all FOR YOU.

This is what we heard Jesus tell His apostles in our gospel reading. “These things I have SPOKEN to you while I am still with you. But the Helper, the Holy Spirit, whom the Father will send in my name, he will TEACH you all things, and bring to your remembrance all that I have said to you.” (John 14:26). The Father sends the Spirit at the request of the Son to CONNECT you to all that Jesus has said and done.

And the truth is, this CONNECTION doesn’t happen apart from the PARTICULAR WORK OF THE HOLY SPIRIT.

“I believe that I cannot by my own reason or strength, believe in my Lord Jesus Christ, or come to Him…” Which leaves me right where I’ve always been – captive to the demands of the law, a slave to the sin that is in me, “having no hope and without God in the world.” (Eph. 2:12)
 Never knowing what God has done for me, for me.
 Never knowing that God loved me so much that He sent His beloved Son into the world to set me free.

“But the Holy Spirit has called me by the gospel, enlightened me with His gifts, sanctified and kept me in the true faith.” The Holy Spirit brings your Lord to you and you to him, and introduces you and He says, “hello,” and you say, ‘hello,’ and He says, ‘I love you. I have loved you for a long time. Would you like to hold my hand?’ And we say, ‘sure. Where are you taking me?’ And he says, ‘To my Father’s House.’ And we say, ‘where is that?’ And He says, ‘come, follow me.’ And our life is changed.

On THAT day of Pentecost, the HOLY SPIRIT PREACHED the GOSPEL through Peter and 3000 lives were changed. 3000 heard the GOOD NEWS and believed what they could not, by their own reason or strength believe.

Over the years, “a great multitude that no one can number” have been changed by the Holy Spirit, one at a time, just as they were then.

‘How are you named?’ Stephen Bunn Cummings. ‘Meet your Lord, Stephen.’ ‘Say hello, Stephen.’ ‘I knew you before I formed you in the womb, Stephen.’ ‘Welcome to the family, Stephen.’ ‘Take my hand, Stephen. Come, follow Me. I have a lot I want to show you.’