Posted on March 5, 2017 by Lutheran Church of the Resurrection

The text for our consideration this morning is the gospel reading that we just heard and we’ll recite it again as we go. 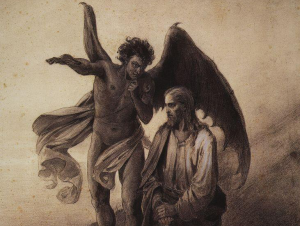 “Then Jesus was led up by the Spirit into the wilderness to be tempted by the devil.” Vs.1

That little adverb “THEN” may be the most important word in this whole account. When is ‘THEN? “THEN” is right after Jesus’ baptism in the Jordan River where the Holy Spirit descended and landed on Him in the form of a dove and the voice of the Father declared, “This is my beloved Son, with whom I am well pleased.”

“THEN,” still dripping with the majestic word of His Father and the Holy Spirit whispering into His ears, “Jesus was led up by the Spirit into the wilderness to be tempted by the devil.”

HOW STRANGE IS THAT? I mean, doesn’t our Lord teach us to pray to Our Father Who Art in Heaven – “Lead us NOT into temptation”? But here the leads Jesus into the wilderness to be tempted.

HOW STRANGE THAT JESUS CHRIST NEEDS TO BE LED INTO TEMPTATION? Who is this for whom temptation to sin is so foreign and unthinkable that He needs to be led by the Spirit into it?

I don’t know about you but I don’t need anyone to lead me into temptation. I can find it easy enough all by myself and even if I don’t go looking for it – it knows how to find me – and its ALWAYS finding me.

Adam and Eve were simply going about their business tending the Garden when a talking serpent said ‘hello.’ It tracked them down – just like it tracks you down – talking serpents with clever words and catchy slogans and questions that make you think, and wonder, and builds your confidence in yourself so that you believe you can handle yourself just fine, and before you realize it you’ve been had – because you never actually read that Bible that you’ve got at home that you’ve been saying now for how long that you’re actually read – and now you wonder, what could be the harm – I mean really?
No one has to lead us into temptation. We are surrounded by it and know right where to engage it just fine – all by ourselves.

But God the Holy Spirit has to lead God the Son into temptation – with the approval of God the Father, “That’s My beloved Son, with whom I am well pleased.”

In the Genesis account, we read that when God made man in His image and likeness, ‘male and female He made them, AND GOD BLESSED THEM.” And with His blessing ringing in their ears, He sends them out into His creation to “subdue it and exercise dominion over it…” (Genesis 1:27-28).

But they forgot who they were – and doubted God’s Word – and the crafty serpent SUBDUED THEM – AND EXCERCISED DOMINION OVER THEM – just as it continues to do with all of the sons of Adam and daughters of Eve.

Which makes me want to ask, DO YOU REMEMBER WHO YOU ARE? Do you remember your baptism where the triune God put His BLESSING ON YOU and made you His child, and
in whom He lives and calls your very body His HOLY temple? Do you remember who you are when temptation finds you?

Adam and Eve were led into the Garden of Eden to SUBDUE it and have DOMINION over it and NOT to fall into sin. And they failed.

And now another man, in the likeness of the 1st Adam is led into the same Garden – now a hostile wasteland. And the BIG QUESTION is, will this MAN remember who He is and what He has been blessed by the Father and sent into this world to do? Or will the Tempter get the best of Him too.

Or will He be just like Israel? No sooner was Israel baptized in the Red Sea than the Spirit of God, hidden in the pillar of cloud and fire, led them into the wilderness. And after 40 days they began to complain that there wasn’t enough food and they were hungry.

And the serpent said to them, “If you are the people of God – would God really let you starve like this? Wouldn’t He feed you? Maybe you’re not really His people and maybe He’s not really your God.”

And they listened and agreed and complained. “Would that we had died by the hand of the LORD in the land of Egypt, when we sat by the meat pots and ate bread to the full, for you have brought us out into this wilderness to kill this whole assembly with hunger.” (Ex.16:3).

Now Jesus Christ is in the same position as all of Israel was. “And after fasting forty days and forty nights, he was hungry.”

Like a hawk that sees a weakened and vulnerable prey, the tempter suddenly appears.

“And the tempter came and said to him, “If you are the Son of God, command these stones to become loaves of bread.” Vs.3

IF YOUR ARE THE SON OF GOD, your Father would want you to feed yourself wouldn’t He? Your first concern is to save yourself. What good are you to anyone else if you starve to death? “Did God really say that you must not eat…?” “You may surely eat…”

“But Jesus answered, ‘It is written, ‘Man shall not live by bread alone, but by every word that comes from the mouth of God.’” Vs.4

It’s a temptation of IDENTITY. “You are my beloved Son, with whom I am well-pleased.” Well, are you or aren’t you? It’s not really about ‘daily bread’ at all. It’s about whether or not you will listen to the rumblings and grumblings of your belly, of your heart, of your peers OR God’s Word and Promise. Instead of turning stones into bread – Jesus stuffed the solid rock of God’s Word into the Tempters mouth.

“Then the devil took him to the holy city and set him on the pinnacle of the temple and said to him, “If you are the Son of God, throw yourself down, for it is written, “‘He will command his angels concerning you,’ and “ ‘On their hands they will bear you up, lest you strike your foot against a stone.’” (vss. 5-6)

“Why, of course,” said the devil. “Why didn’t I think of that? I know the Word of God too, you know? And I too know that it is the most important thing and that we should ALWAYS put ALL of our trust in it. All I’m suggesting Jesus is that show the world how much trust in God’s Word you have? Surely if you trust His Word as you say you do and if God loves you as HE says HE does, then He will not let any harm come to you.” “JUMP.”

When Israel came to a place in the desert called ‘Massah,’ they demanded that God show them some sign, some proof that HE was still WITH THEM and was still taking care of them. His Word to them wasn’t enough. They wanted something MORE THAN GOD’S WORD. Moses scolded them, “You shall not put the Lord your God to the test.”

Speaking through the Psalmist, God assures His people of His perfect care. “For he will command his angels concerning you to guard you in ALL YOUR WAYS. (A little phrase that the devil cleverly left out of his quotation). On their hands they will bear you up, lest you strike your foot against a stone.” (Psalm 91:11-12)

Luther says that this second temptation is the greatest one for us. “Men and women, walking not in the clear way of God’s word but in their own muddled emotions and opinions, have jumped from the pinnacle of truth and struck their feet upon the stone of heresy.” BUT NOT JESUS.

“Again, the devil took him to a very high mountain and showed him all the kingdoms of the world and their glory. And he said to him, “All these I will give you, if you will fall down and worship me.” (vss. 8-9)

“I know that You have come to reclaim this world for your Father. Okay then. I’m on your side. I’ll give it all to you. It is all mine, you know. I took it from your Father long ago in a miserable little garden under a ridiculous little tree. Your Father gave those two pathetic creatures dominion over it – and they handed it over to me – fair and square.

But just to show you that there’s no hard feelings and that I’m not as bad as you make me out to be, I’ll give it all to you so you can give it back to your Father. All you have to do is acknowledge where you got it and how you got it. All I want is the recognition that I deserve.”

Then Jesus said to him, “Be gone, Satan! For it is written, ‘You shall worship the Lord your God and him only shall you serve.’” (vs.10)

Sometimes it’s the smallest thing that can spoil the true worship of God – something as small as that little word, “ONLY” – which is so small that all that the only thing that it can hold is God. If you try to squeeze anything else into your worship, no matter how tiny, it’s too much for ‘ONLY’ to contain and your worship becomes idolatry.

“Then the devil left him, and behold, angels came and were ministering to him.” (vs.11)

Baptized, Blessed, Beloved children of God, do you see what God has done for us here? Adam and Israel were tempted JUST LIKE WE ARE. And they listened to the Tempter JUST LIKE WE DO. And they fell – JUST LIKE WE HAVE.

BUT there is another ADAM – a HOLY ISRAEL – who was led into the wilderness to face the Tempter. And by His victory, He has SUBDUED THE EARTH and EXERCISED HIS DOMINION OVER ALL THINGS and He now “leads us through the wilderness of this world to the glory of the world to come.” (Collect)

May the peace of God which passes all understanding, keep your hearts and minds in Christ Jesus.
Amen.