Posted on March 19, 2017 by Lutheran Church of the Resurrection 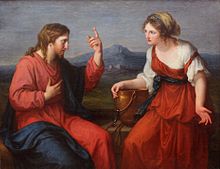 Jesus answered her, “If you knew the gift of God and who it is that is saying to you, ‘Give me a drink, you would have asked him and he would have given you living water.”

“If she had only known.” Now there’s an epitaph you don’t want written on your tombstone.

Picture a family gathered around the hospital bed. “Any last words” comes the question. “If I had only known.” And everyone nods in agreement. ‘Yea, “IF HE HAD ONLY KNOWN.”

The sun rose, the rooster crowed, the man sleeping next to her snored. Just another day. “IF SHE ONLY KNEW.”

She got up, stretched, felt the familiar aches and pains. There were chores to do, meals to prepare, water to be hauled in from the well on the outskirts of town. Just another day. “IF SHE ONLY KNEW.”

She walked the same path she had walked countless times. But on this same day, a man was also making his way to this same well. He was traveling to Galilee and he “had to pass through Samaria.”

“Had to,” not as in there was no other way to get there. But “had to” because there was this woman that He wanted to meet. We could just as easily say that He “had to” come all the way from heaven to earth just to meet her. “IF SHE HAD ONLY KNOWN.”

“Wearied as He was from his journey, He was sitting by the well.” “It was about the sixth hour.” That is, about noon when the sun is at its’ hottest.

When she arrived at the well, He was already there, sitting beside it. She says nothing to him. He speaks her. “Give me a drink.”

It’s one of those awkward moments. He’s a Jew and she’s a Samaritan and Jews and Samaritans were raised to be very distrusting of each other. Times that awkwardness by two – He’s a man and she’s a woman.

But He’s THIRSTY. It’s as simple as that. “Give me a drink.”

It doesn’t SEEM like a lot to ask really. But she thinks it is. Or at least she intends to make a big deal out of it. “How is that you a Jew, ask for a drink from me, a woman of Samaria?”

He answers, “If you knew the gift of God, and who it is that is saying to you, ‘Give me a drink,’ you would have asked him, and he would have given you living water.” “IF YOU ONLY KNEW.”

“You’re excuses are all well-rehearsed. The social customs and religious issues and racial prejudices…
• your parents had a bad experience once with the church,
• all gods are all the same – who’s to say which one is right
• science has proved religion to be wrong.
Each one like a roadblock to keep Him from getting too close.

She wants to argue with him and show him how absurd he is. “Sir, you have nothing to draw water with, and the well is deep.” For her, it’s a PRACTICAL MATTER. He obviously doesn’t have what it takes to deliver on the offer He has made her.

She wants to put Him in his PROPER PLACE. “Are you greater than our father, Jacob? He gave us this well and drank from it himself, as did his sons and his livestock.”

She wants to say, “HOW CAN WATER DO SUCH GREAT THINGS?” All she sees is plain water that whoever drinks of it WILL BE THRISTY AGAIN.

She doesn’t see that ONE GREATER THAN JACOB who gives Himself to her in, with and under this water and takes her into His Kingdom through the same.

“She said to him, ‘Sir, give me this water, so that I will not be thirsty or have to come here to draw water.”

She still sees no further than the physical convenience of not having to make this daily hike and carry this water. She thinks of him as someone who is interested in making her life easier. As if the latest technology and a little more luxury might actually be the answer she’s been searching for. “IF ONLY SHE KNEW.”

“Jesus said to her, ‘Go, call you husband, and come here.’ The woman answered him, “IF YOU ONLY KNEW…” “I have no husband.”

“Jesus said to her, but I do know. You are right in saying you have no husband; for you have had five husbands and the one you now have is not your husband. What you have said is true.”

He knows us better than we know ourselves.
• He knows every wound, every scar, every shame, every guilt.
• He knows how stubborn we are, our prejudices and every excuse that we use to keep Him out of our life.
• He knows how lonely, how disappointed, how afraid we are, despite all of the modern appliances and conveniences that our money can buy.
• He knows how easily life takes control of us so that we are like prisoners who would love to be free but cannot say NO – this is the Lord’s Day.

“If you knew the gift of God and the one saying to you…” But we don’t. How could we unless He comes to us and speaks to us and opens our eyes and our minds and our hearts and MAKES HIMSELF KNOWN TO US?

And that is just what He does. From heaven to earth, He meets us at the baptismal well, one person at a time.
• And he gives us the gift of God, which is, Himself. His body given for you, His blood shed for you, and in the WATER and the WORD and the BREAD and the WINE, He opens our minds that we may KNOW HIM.
• For to KNOW HIM is like having ‘a spring of living water, welling up in you to eternal life.’

The English journalist Malcolm Muggeridge puts it like this:
“I may, I suppose, regard myself as a relatively successful man. People occasionally stare at me in the streets – that’s fame. I can fairly easily earn enough money to qualify for admission to the higher slopes of the IRS – that’s success. Furnished with money and a little fame, even the elderly, if they care to, may partake of friendly diversions – that’s pleasure. It might happen once in a while that something I said or wrote was sufficiently heeded for me to persuade myself that it represented a serious impact on our time – that’s fulfillment.

Yet, I say to you, and I beg you to believe me, multiply these tiny triumphs by millions, add them all up together, and they are nothing, less than nothing, indeed, a positive impediment when measured against one drop of that living water that Christ offers the spiritually thirsty, irrespective of who or what they are.”

“So the women left her water jar and went away into town and said to the people, ‘Come, see a man who told me all that I ever did. Can this be the Christ?”

And “many Samaritans from that town believe in him, because of the woman’s testimony.” They said, “we know that this is indeed the Savior of the world.”

No one can say of them, “IF ONLY THEY KNEW…”

As happy an ending to this story as this is, there is one detail that is still lacking which makes us wonder. Did Jesus ever get His drink of water? We’re never told that He did.

In fact, it is some time later, at the other end of his gospel, that John reports that as Jesus hung from the cross He cried out, “I thirst!” There on the cross, the One who is LIVING WATER is pouring Himself out for the life of His thirsty and dying world.

He asked her for a drink of water but pleaded with His Father that He would NOT have to drink from the cup that He was giving His Son to drink. “Take this cup from me. Yet not my will but yours be done.” (Luke 22:42). It is the cup of the Father’s wrath for all of her sins and ours that He is given to drink.

“He told me everything I ever did,” she said. He knew it all. And He TOOK EVERYTHING SHE EVER DID, and EVERYTHING THAT WAS EVER DONE TO HER, onto Himself and put it to death in Himself FOR HER LIFE.

The Lord told Moses, “Behold, I will stand before you there on the rock at Horeb, and you shall strike the rock, and water shall come out of it, and the people will drink.” (Exodus 17:6)

And then John writes, “One of the soldiers pierced his side with a spear, and at once there came out blood and water.” (John 19:34) This is the “Fountain of water springing up into eternal life” for that thirsty Samaritan woman and her village, for Moses and thirsty Israel, for you and for me and for all who hunger and thirst for righteousness.

This is why “He had to pass through Samaria.” He wanted to meet this woman at Jacob’s well. It is why He has come to you and met you at the baptismal well that YOU MAY NEVER SAY – ‘IF ONLY I KNEW.’

Now may the peace of God which passes all human understanding keep your hearts and minds in Christ Jesus.