Posted on April 2, 2017 by Lutheran Church of the Resurrection

“Now a certain man was ill, Lazarus of Bethany, the village of Mary and her sister Martha…” 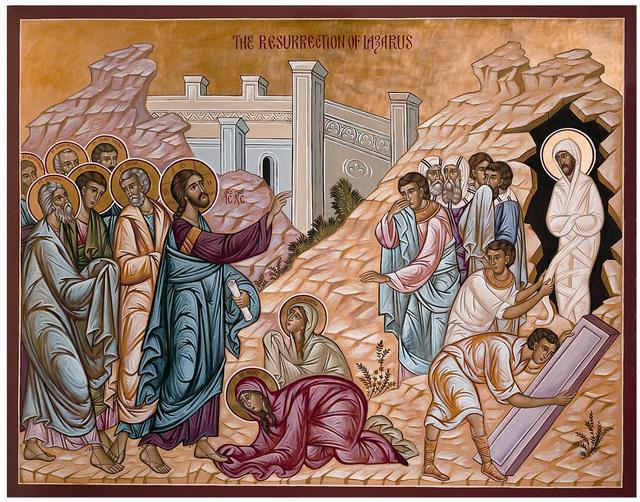 The village of Bethany was “about two miles” outside the city of Jerusalem, according to John. Somewhere along the line, Jesus met two sisters who lived there and every time He was in Jerusalem, He always knew He had a place to stay with them.

They had a brother named Lazarus. Whether he actually lived in the same house with the sisters or not is unclear. But what is clear is that over time, a very close bond of friendship developed between Jesus and this family.

I. The Sister’s Appeal to Jesus

So when brother Lazarus becomes ill, the sisters called for Jesus who was away at the time. “So the sisters sent to Him saying, ‘Lord, he whom you love is ill.” Lazarus must have been SERIOUSLY ILL. They’re not going to bother Jesus over a common cold or flu. They hope that He will come – quickly.

Their message reads, “Lord, he whom YOU LOVE is ill.” I get stuck on that every time I hear it – because what I expected them to say is, “Lord, he who LOVES YOU is ill.”

Because isn’t THAT the way we appeal for help to God? “Lord, help me. I love you.” “Lord, help my brother or sister, or friend – they’re good Christians, they love you.” How many funeral services have we all been to where the sole focus is on how much the deceased loved God?

But their message read, “Lord, he whom YOU LOVE is ill.” They’re appealing to Christ, not on the basis of their brother’s love for Jesus but on Jesus’ love for Lazarus.

I know that the Law of God tells us that we are to “LOVE the Lord our God with all our heart and soul and mind and LOVE our neighbor as ourselves.” But it also says that the best LOVE we do is like filthy rags – soaked with selfishness and a willingness to go only so far and what’s in it for me.

But God’s love for me is so different than my love for God. “My song is love unknown. My SAVIOR’S LOVE FOR ME. Love for the LOVELESS SHOWN that they might lovely be.” The familiar children’s hymn gets it exactly right – “Jesus loves me this I know… Little ones to Him belong – they are weak but He is strong.”

“They sent to Him saying, ‘Lord, he WHOM YOU LOVE is ill.”

Jesus’ response to the sister’s message is very strange. “This illness does not lead to death. It is for the glory of God, so that the Son of God may be glorified through it.” It’s the same as we saw last Sunday with the man born blind – Jesus is going to use Lazarus’ death to “display the works of God.”

John reminds us of what we have already said, “Now Jesus loved Martha and her sister and Lazarus.” But he makes the most unexpected connection to His love for them when he tells us “So..” “So” means, ‘now based on that,” when he heard that Lazarus was ill, he stayed two days longer in the place where he was.”

We certainly expected that on receiving the message, Jesus would have ordered the fastest Uber donkey in the area. Isn’t that the way that we expect Him to answer our prayers? We live in a ‘quick fix’ culture and we believe that there is a fix for everything and if God can’t fix it we will and we’ll do it quickly because waiting is bad. Who has time to wait?

When we hear the Psalmist cry out to the Lord “from the depths” and say that he is willing to ‘wait for the Lord, my soul waits, and in His Word I put my hope,” we say, ‘why wait?’ ‘Who has the patience for that?’

When you’re really sick… think appendicitis or heart attack or stroke… waiting two whole days for an appointment with a doctor is like an eternity. But it took Him AT LEAST two more days to make the journey and now we’re talking longer than eternity. There’s a point at which you just give up waiting because it’s too late. You might as well forget it. What’s left to do really?
But not with the Lord. NEVER WITH THE LORD. He intends to GLORIFY GOD in Lazarus so that you will NEVER GROW WEARY OF WAITING for Him.
• He is not going to arrive just in time – but when time has completely run out.
• He is not going to save this man for whom there is little hope – but for whom all hope is gone.
• He is not going to call this body in which there is hardly any breathe – but on these dry bones in which there is no life.

So that you may know that you must always “wait for the Lord, my soul waits for the Lord and in His Word I put my hope.” For “The Lord is NOT SLOW TO FULFILL HIS PROMISE AS SOME COUNT SLOWNESS, but is patient toward you, not wishing that any should perish, but that all should reach repentance.” (2 Ptr. 3:9)

I’ll tell you this, you’re friends and loved ones who have died in the faith know what it means to ‘wait for the Lord.’ They’re souls are in heaven but their bodies are still in the grave. And they ‘wait’ for the Lord to come on that LAST DAY which even the Son of Man doesn’t know WHEN.

But when He comes, all the ‘waiting’ will be over and bodies will arise from the ground and be united to their own soul – bone to bone and sinews and flesh and the breath of God breathed in and they are alive like they’ve never been alive – never to die again. “And the glory of God revealed and the glory of the Son is revealed through it.”

These are the same men and women who complained about the ‘wait,’ “our bones are dried up, and our hope is lost, we are indeed cut off.” (Ez.37:11). But with the Lord, there is always a greater surprise than anything you can imagine and it’s worth waiting for.

III. The Resurrection of the Dead

“When Jesus saw Mary weeping and the Jews who had come with her also weeping, he was DEEPLY MOVED IN HIS SPIRIT AND GREATLY TROUBLED. Where have you laid him? They said to him, ‘Lord, come and see.’” “Jesus wept.” That’s the shortest verse in the bible that you could spend a lifetime pondering and never get to the bottom of it.

“Then Jesus, DEEPLY MOVED, came to the tomb.” This is the second time John tells us that Jesus is “deeply moved.” It’s the word that describes the snort that a horse makes. He’s not just SAD. He’s ANGRY.

In the beginning, He created Adam and gave him life – He breathed into his nostrils the breath of life – He breathed HIS OWN LIFE into the man. As John tells us, “In Him was life…” (Jn.1:4) So, when the miserable serpent seduced the woman with his lecherous lie, “you will not surely die,” and DEATH OVERRULED LIFE – this was personal to the Son of God. For every death is the death of God Himself – which is why He must enter into death – for He must once and for all – OVERRULE DEATH WITH LIFE. And we’re going to see a preview of that right now. NO WAITING!

“Jesus said, ‘Take away the stone.’ And Martha thinks Jesus wants to see the body and pay His last respects. He must feel bad that He didn’t get here quicker. BUT IT’S TOO LATE. The body is decomposed and “there will be an odor.” She wants to protect Jesus from the stench of death.

He insists, and they roll away the stone. And Jesus speaks a prayer of thanks to His Father – for He is about to “Glorify the Father so that the Son of God may be glorified through it.”

“And Jesus cried out with a loud voice, ‘Lazarus, come out.” One early church father said that He had to call Lazarus by name or every dead body in Bethany would have come marching out of their tombs.

“The man who had died came out, his hands and feet bound with strips, and his face wrapped with a cloth.”

This is incredible! The man was dead for four days. There was no life in him. And yet he HEARS THE WORD through his dead ears – and Jesus’ Word OVERRULES DEATH WITH LIFE – and the dead man obeys the command of His LORD.

And as amazing as this is, it is not the final word. Jesus said, “This illness leads to the glory of God that the Son of God may be glorified in it.” But we haven’t seen His glory yet.

“The man who had died came out…” But he will die again, and be wrapped in grave clothes again, and be buried again – to dust he shall return for from dust he was made.

The one who loved Lazarus must become ill with Lazarus’ illness – and yours and mine. And only the word of the serpent must be heard – “Crucify Him, crucify Him.” And the Father will not come to His beloved Son in time to save Him. The Word of God will not be heard. And a man named Joseph will wrap Him in burial clothes and lay him in a tomb and roll a stone against the entrance.