Posted on August 13, 2017 by Lutheran Church of the Resurrection 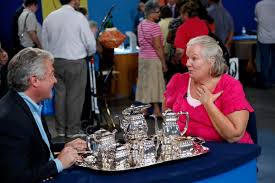 Every once in a while I’ll turn the TV to the “Antiques Roadshow.” It’s fun to watch folks bring in something wondering if it might just be something valuable. “It’s been sitting in their basement for years,” “It was passed down from my great, great grandparents.” They were going to throw it away but wondered if it might not be worth something. And then the expert will either say something like, ‘it’s really not worth anything,’ or ‘you don’t know what you have here.’

Everything in between these two points in his gospel is purposed to move us, teaching by teaching, parable by parable, miracle by miracle – the mystery rolled back further and further until we too confess – “truly this is the Son of God.”

This is the goal of our gospel reading for this morning.

22 “Immediately he made the disciples get into the boat and go before him to the other side, while he dismissed the crowds.”

The “Feeding of the 5000” has just concluded. No sooner have the 12 baskets of leftovers been collected than Jesus ORDERS them to get into the boat. “HE MADE THE DISCIPLES GET INTO THE BOAT.” You get the feeling they didn’t want to go. Maybe they wanted to stick around for a while. He did such a good job with dinner, let’s see what He can do with breakfast.

He orders them to get into the boat and shove off while He remained behind and ‘DISMISSED’ the crowds.

His disciples had told Him to ‘dismiss the crowds’ BECAUSE THEY WERE HUNGRY.

But now Jesus dismisses the crowd because they have been WELL FED.

In the book of Numbers we read that God instructed Moses to tell the High Priest, Aaron, to dismiss the gathering of His people with these words: “The Lord bless you and keep you; the Lord make His face shine upon you and be gracious to you; The Lord lift up His countenance upon you and give you His peace.” (Numbers 6:24) Who knows that Jesus didn’t dismiss HIS ‘WELL-FED’ congregation in the wilderness with these very words?

23 “And after he had dismissed the crowds, he went up on the mountain by himself to pray. When evening came, he was there alone…”

He had originally come to this ‘desolate place’ to be alone and to pray. But the crowds found out where He was and they all showed up and there goes the vacation. But now He does what He came to do. He prays, alone. Matthew wants to make it very clear that Jesus is alone. He was “by himself… he was there alone…”

24 ”But the boat by this time was a long way from the land, beaten by the waves, for the wind was against them.”

Many of the 12 disciples were experienced sailors, so despite the nasty conditions, they made good headway to “the other side,” which was probably Capernaum or one of the villages on the north side of the sea of Galilee.

In the 8th chapter of his gospel, Matthew reported about an earlier adventure on the sea. The storm was fierce to the point that the waves were coming over the sides of the boat threatening to sink it, and Jesus was asleep in the stern, and the experienced sailors cry out to their carpenter/lord – “Save us Lord, we are perishing…” And He did. (Matthew 8:23-27)

We wonder if they remembered any of that?

25 “And in the fourth watch of the night he came to them, walking on the sea.”

The “fourth watch of the night” is the hours from 3am. to 6am. I can’t think of much reason for Matthew to tell us the time except that Jesus prayed for a long time and the disciples had been sailing the boat and fighting the wind for a long time and were undoubtedly exhausted.

Keep in mind, this is all still the same day as when they had set sail for a desolate place before the 5,000 showed up.

In their exhaustion Jesus comes to them – “WALKING ON THE SEA.” All of the artwork that I’ve ever seen of this always portrays Jesus as though He was out for a casual stroll in the park- effortlessly walking on the water.

He is REFRESHED from praying. They are EXHAUSTED from working.

Jesus comes to His disciples – not to hitch a ride back home, but as the ANSWER to the great QUESTIONS put to Job that we heard earlier.
“Who shut in the sea with doors when it burst out from the womb,
when I made clouds its garment and thick darkness its swaddling band,
and prescribed limits for it and set bars and doors,
and said, ‘Thus far shall you come, and no farther,
and here shall your proud waves be stayed’?
“Have you entered into the springs of the sea,
or walked in the recesses of the deep?” (Job 38)

26 “But when the disciples saw him walking on the sea, they were terrified, and said, “It is a ghost!” and they cried out in fear.”

Whenever God comes to us with even the smallest bit of His glory exposed – we can’t handle it. We freak out. Their reaction is three-fold.
• First, “they were terrified…”
• Second, “they said, it is a ghost…”
• Third, “they cried out in fear.”

27 But immediately Jesus spoke to them, saying, “Take heart; it is I. Do not be afraid.”

“Immediately” Jesus speaks His Word to them – His GRACIOUS and GOSPEL word which has the power to CHANGE the FEAR into JOY even though the situation remains UNCHANGED.

“Take heart…” means, “BE COURAGEOUS.” “HAVE COURAGE.” Your Lord has seen your distress and your weariness and has come to DELIVER you and give you REST.

“It is I.” He’d repeat this little phrase once again, after His resurrection when the disciples would once again wonder if they were seeing a ‘ghost.’ “It is I myself. Touch me and see. A ghost does not have flesh and bones as you see that I have.” (Luke 24:39)

28 And Peter answered him, “Lord, if it is you, command me to come to you on the water.”

How disappointing. Don’t go giving Peter more credit that he’s due here. He’s not ‘TAKEN HEART,’ or ‘being courageous.’ In fact, just the opposite.

“IF it is you…” “Peter, He just said, “it is I.” “Why is His Word not good enough for you?” “Why do you always want to put Him to the test and make Him prove Himself to you?”

There’s a sea of difference between that little word ‘if’ and ‘since.’ How often have we put our Lord to the test saying “if it is you…”, “if you really love me…”; instead of “since it is you…” “since you love me…”

WE DON’T KNOW WHAT WE HAVE.

29 [Jesus] said, “Come.” So Peter got out of the boat and walked on the water and came to Jesus.

So Jesus puts Peter to the test. “Okay smart aleck. You want to test me? “Come.”

Be careful about putting your Lord to the ‘test.’ He may just accept your test and force you to either trust Him or not.

So, let’s give poor Peter this much credit. When he was trapped in his own trap, he got out of the boat and walked to Jesus.

30 But when he saw the wind, he was afraid, and beginning to sink he cried out, “Lord, save me.”

This is the same wind that had been pounding the boat all night long. But now Peter ‘saw the wind.’ And in seeing the wind, “he was afraid.” Jesus had just told him, “do not be afraid.” And for a moment, Peter was the fearless one. But then he took his eyes off of Jesus and saw the ridiculous situation he was in.

The danger for us here is to say that it was PETER’S FAITH that kept him afloat and that as soon as he began to doubt, HIS FAITH could no longer hold him up. No. DON’T EVER PUT FAITH IN YOUR FAITH. Your faith will NEVER support you or save you.

Earlier, this same Peter had made the good confession of faith – “You are the Christ, the Son of the living God.” And Jesus commended Peter, calling him, ‘Petros,’ “and on this rock I will build my church.” But our faith is fragile and fleeting. And now this ROCK man is sinking fast.

But here is where Peter has got it just right and where his faith is at its MOST MATURE AND AT ITS BEST. As he is sinking, he cries out to Jesus. “Lord, save me.”

FAITH ALWAYS HAS TO HAVE A WORTHY OBJECT TO TRUST IN – OR ELSE IT’S NOTHING BUT FOOLISHNESS. Everyone has ‘faith.’ But far too few have faith in the ONE OBJECT that can actually save them.

31 “Jesus immediately reached out his hand and took hold of him, saying to him, “O you of little faith, why did you doubt?”

There is an eternity of difference between “little faith” and “unbelief” – between “doubt” and “rejection.”

32-33 And when they got into the boat, the wind ceased. And those in the boat worshiped him, saying, “Truly you are the Son of God.”

Teaching by teaching, parable by parable, miracle by miracle, the mystery is being rolled back further and further. And the seed that was sown in our baptism is taking root and growing.

And if we will allow it – our ‘little faith’ is tested – and it grows stronger. And we learn what we have in this Jesus Christ and in the fact that He has us.