Posted on November 6, 2017 by Lutheran Church of the Resurrection 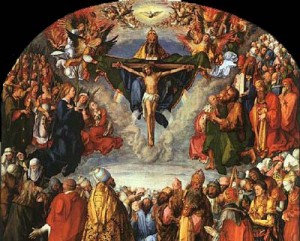 On this Sunday every year, we read the names of all those who were members of this congregation when they died. Some we never knew. Some we knew quite well. Some were fathers and mothers, husbands and wives, sons and friends. All of them, our brothers and sisters in Christ. Time has passed and the anguish of the grave has faded. Death has lost the terrible sting that it once had. And we give thanks to God for that.

But the question is, why do we do this? Why do we name our dead before the Lord? Why do we place flowers at the foot of altar with the names of our loved ones on our lips and in our hearts?

We name our LIVING before the Lord in our prayers asking for the Lord’s care for them. But we certainly don’t need to do that for the dead. We do not pray FOR THE DEAD as some do, because simply put, they don’t need our prayers. Their bodies are in the grave awaiting the resurrection of all flesh. And their souls are in heaven and they are ‘with the Lord.’ THE DEAD DO NOT NEED OUR PRAYERS.

So why do we do this? What are we doing when we call out the names of those who have died in the faith and speak their names in our hearts as we do on this day?

The answer is, we are counting the spoils of our Lord’s victory over death and the devil. For Christ our Lord has gone to war with devil to set the captives free. And has won the victory – and the spoils of His victory are those whom we have named.

They were captives to the devil and prisoners of their own sin just as much as we are right now. It was the same daily battle between the good that they willed to do but didn’t and the evil that they hated but did for them as it is for us.

But now they’re FREE. Not because they managed to escape. But because Jesus Christ has set them free and brought them into His Father’s House “to live with Him in everlasting righteousness, innocence, and blessedness, just as He is risen from the dead, lives and reigns to all eternity. This is most certainly true.” (Small Catechism – 2nd Article)

So we name our dead to mock the devil and to praise our mighty Lord, the ‘warrior Lord,’ the Lord, God of Sabbaoth. These whom we have named are the holy plunder of God. And this is the feast of victory for our God. Alleluia.

Jesus put it like this. “When a strong man fully armed, guards his own house, his possessions are safe. But when someone stronger attacks and overpowers him, he takes away the armor in which the man trusted and divides up the spoils.” (Luke 11:21-22).

The devil is a strong man. As we sung last Sunday, “No strength of ours can match his might. We would be lost, rejected.” The devil held every man and woman and child captive to sin, death and his dark power over them.

“But now a champion comes to fight, whom God himself elected. You ask who this may be. The Lord of Hosts is He – Christ Jesus, mighty Lord, God’s only Son adored. He holds the field victorious.” The strong man has been overpowered by the stronger man – the God/Man – Jesus Christ. “Christ is risen!” “He is risen indeed – Alleluia.”

The Multitude
In his Revelation, St. John sees the holy plunder that Christ has taken from the devil and describes it like this, “Behold, a great multitude that no one could number, from every nation, from all tribes and peoples and languages…”

Even though this GREAT MULTITUDE of captives set free cannot be numbered, still we can single out a few who we know by name. *There is George and Jim, Brendan and Franklin, Elizabeth and Cordula, and Tom and Betty and Eva and Frank and there is Bonnie, still just getting settled into her eternal life.

*[There is Walter and Harry. And there is Carlotta, still just getting settled into her eternal life with God.]

They’re standing shoulder to shoulder with the angels and archangels and all the company of heaven, praising the Lamb of God who brought them out of this ‘great tribulation’ and into that “marvelous light.”

White Robes
They are “standing before the throne and before the Lamb clothed in white robes.”

This is much more than just a ‘fashion statement.’ In the beginning, the man and the woman stood naked before God and felt no shame. Where there is no sin there is no shame, and we see God “as He is,” and He sees me ‘just as I am’. And it’s all “very good.”

But then we sinned. O how could we have sinned against our loving Creator who made us with His own hands and gave us His own breath and put us in PARADISE and said – “welcome home.”

But we did, we ALL did. And we feel so guilty and so ashamed of ourselves. “Look what He did for us and all that He gave us. How could we?” And in our guilt and shame we couldn’t bear to let Him see us bare. AND HE COULDN’T STAND THE SIGHT OF US EITHER. But neither was He content to just let bygones be bygones.

“So the Lord God made for Adam and his wife garments of skins and clothed them.” (Genesis 3:22). Have you ever noticed that NO SOONER DOES MAN SIN THAN BLOOD IS SHED. But it’s not THE SINNER who bleeds – it’s an innocent animal.

I know that the ‘official record’ doesn’t say what kind of animal it was that God killed to make those “garments of skins” to clothe those guilty sinners, but I’m going to take a wild guess and say that it was a lamb.

Jesus Christ, is the INNOCENT Lamb of God, who took on human skin,
• so that He might be slaughtered and cloth guilty men and women with HIS SKIN,
• so we might not hide from God like Adam tried to do,
• so He might present His holy bride “to himself in splendor, without spot or wrinkle or any such thing, that she might be holy and without blemish.” (Eph.5:27)

So we are not honoring these men and women whom we have named because they were perfect or good or even nice. This is no place for funeral parlor talk. “He was always such a good man.” “She was the perfect wife.” “He never did anything wrong.”

We can be honest. They were sinners just like we are. But in their baptism, God the Father ROBED them in God the Son. And God the Holy Spirit kept them ROBED in Christ until He called them into His heaven where the baptismal ROBES that could only ever be seen by faith, are now seen by John.

They are “standing before the throne and before the Lamb clothed in white robes.”

Palm Branches
“And with palm branches in their hands, they were crying out with a loud voice, ‘Salvation belongs to our God who sits on the throne and to the Lamb!’”

In his Gospel, St. John catches the little details that the other gospels miss. The Palm Sunday account is recorded in all four gospels, but its only John who reports that as Jesus entered into Jerusalem on a donkey, the crowds “took branches of palm trees and went out to meet him, crying out ‘Hosanna! Blessed is he who comes in the name of the Lord…” (John 12:13).

They are welcoming Jesus as they would welcome a savior king, whom they hope has come TO DEFEND AND PROTECT THEM AND DELIVER THEM FROM THEIR ENEMY.

Now, in his revelation, the same John sees the crowds in heaven, still holding onto those palm branches. But now, praising the one who CAME IN THE NAME OF THE LORD, and who, by His death on the cross and resurrection from the dead, HAS conquered their great enemy and set them free.

The prophet Isaiah once found himself before the throne of God and he couldn’t bear it. “Woe is me! For I am undone, for I am a man of unclean lips and I dwell in the midst of a people of unclean lips, and my eyes have seen the King, the Lord of hosts.” (Is.6:4-5)

But now, John sees the angels, the elders and the four living creatures which stand for men and women from all four corners of the world, standing before the King, the Lord of hosts, singing His praise, every lip sterilized by that which comes from the altar – hot coals for Isaiah lips – bread and wine for yours.

And what wonderful speech comes from those sanctified lips. ‘Amen! Blessing and glory and wisdom and thanksgiving and honor and power and might be to our God forever and ever! Amen.”

In just a few moments, we will take our place in that multitude – or they will take a place with us – I’m never quite sure if we ascend to heaven or if heaven descends to us in the Sacrament of the Altar.

Whichever it is, we will join our sanctified lips with the ‘angels and archangels and all the company of heaven, to laud and magnify’ the glorious name of this God around whose throne we gather.

This is the celebration of ALL SAINTS. “ALL” means ‘all’ – the saints in heaven and the saints on earth – ALL one, holy Christian and Apostolic Church – the living and the dead separated only by the silky thin veil of time and space.

“O blest communion, fellowship divine! We feebly struggle, they in glory shine; yet all are one in Thee, for all are Thine. Alleluia! Alleluia!”

And so we name those who died in this one, true faith, before the Lord, not because we believe that they were so good that they were worthy of such honor. But because this is what God has promised to all the faithful in Christ in His Word, and we believe that the Word of God is most certainly true.
Listen to the Word of God through the apostle Paul to the saints in Colossae:
“He has delivered us from the domain of darkness and transferred us to the kingdom of his beloved Son, in whom we have redemption, the forgiveness of sins.” (Col. 1:13-14.)

“And you, who were dead in your trespasses… God made alive together with him, having forgiven us all our trespasses, by canceling the record of debt that stood against us with its legal demands. This he set aside, nailing it to the cross. He disarmed the rulers and authorities and put them to open shame, by triumphing over them in [Jesus]. (Col. 2:13-15)

As we name our dead before the Lord today, we should also be reminded that this is our destiny too. We will all one day die. And if, by God’s grace, we persevere in this ‘one, true faith,’ our name will one day appear on this list.

We too will be called out of this great tribulation and into His marvelous light. We will come before the Lamb on His throne, clothed in the white robes we received in our baptism, one of that great multitude praising the Name that is above every name.

“They shall hunger no more, neither thirst anymore; the sun shall not strike them by day nor any scorching heat. For the Lamb in the midst of the throne will be their shepherd and he will guide them to springs of living water, and God will wipe away every tear from their eyes.”