Posted on November 27, 2017 by Lutheran Church of the Resurrection

In the beginning, God created the world by His word, “let there be,” “and there was.” That’s the kind of power that God’s Word is. Whatever is says it does. 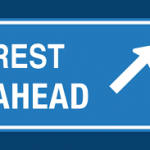 The SEVENTH DAY of the world should have been the LAST DAY – the ETERNAL DAY, in which EVERYTHING THAT GOD MADE, RESTED in the ‘REST OF GOD,’ as in, “come to Me… and you will find REST for your soul.”

But as we all know, Adam and Eve didn’t ‘REST’ in ‘God’s rest.’ They listened to a voice that said, ‘You’re restless aren’t you? You want to be like God, don’t you? You won’t ever find ‘rest’ for your soul until you’re like God, will you? Come to me, and you will find REST for your soul.”
And Adam and Eve looked inside themselves and examined their hearts according to the serpents word, and sure enough, what do you know, they were ‘restless’ weren’t they? As they left the Garden they began their quest to “find rest for their souls” APART FROM GOD. And all humanity followed them.

And so what should have been the LAST DAY, wasn’t, because the almighty God will not be denied His joy or put up with our ignorance and faithlessness forever. He prepared a Kingdom from the FOUNDATION OF THE WORLD, and if He has to make all things new again, He will do it. Another LAST DAY would be needed.

Just as sin entered the world THROUGH ONE MAN, so set in motion His PLAN to make all things new again THROUGH ONE MAN. Through ONE MAN, God planned to bring His restless men and women into HIS REST in the “the kingdom prepared for them before the foundation of the world.”

He put the Word out, announcing His plans. In ‘days of old’ He broadcast His PLANS to ALL NATIONS, in many and various ways by the prophets. One of my own favorites is the word broadcast by the prophet Jeremiah, chapter 29:11 – “I know the plans that I have for you, declares the Lord, plans for welfare and not for evil, to give you a future and a hope.” (Jer. 29:11).

But now in these LAST DAYS, He has broadcast His PLANS through His Son, “Come, you who are blessed by my father, inherit the Kingdom prepared for you from the foundation of the world.”

In the ‘OLDEN DAYS’ God came with the gentle, humble, tenderness of a shepherd with his sheep. “Behold, I, I myself will search for my sheep and will seek them out… I will seek the lost, and I will bring back the strayed, and I will bind up the injured, and I will strengthen the weak… I will rescue my flock; they shall no longer be a prey.”

The Shepherd brings His sheep into “their own land,” and sets an eternal shepherd over them, who is, “my servant David, and he shall feed them and be their shepherd. And I, the Lord will be their God.”

And when the ‘OLDEN DAYS’ were over, “and the time had fully come, the ‘LAST DAYS’ began. And “Now in these last days,’ THE MAN through whom the plans of God would be accomplished has made the grand announcement in person – “I am the good shepherd.”

All of God’s PLANS for your welfare, to give you a future and a hope, are accomplished in this man. From His ridiculous, cross-shaped throne, the judgment of God against all the rebellion and restlessness of mankind was carried upon the King Himself – FOR THE KING HIMSELF IS THE MAN OF GOD. He suffered the punishment for all mankind, from the first sinner to the last, in our place, on our behalf, without any merit or worthiness in us – by grace alone. Why? Because this was His plan “from the foundation of the world.”

In Christ and Him crucified, we see NO REST, NO GLORY, NO PEACE. In Him, we see Adam and Eve and the end of all THEIR PLANS to find rest for their souls apart from the REST OF GOD.

But then, BEHOLD, the 3rd day, LET THERE BE LIGHT. And the light shattered the darkness and now in HIM – THIS ONE MAN, we see “the kingdom prepared for you from the foundation of the world.”

As He is about to ascend to His Father, He sends His apostles into the whole world THAT HE CREATED IN THE BEGINNING, with the same message as that of the prophets of old. “I know the plans that I have for you, declares the Lord, plans for welfare and not for evil, to give you a future and a hope.” (Jer. 29:11).

And this holy message is still being broadcast to the ends of the earth. And it will continue to be broadcast until it reaches every nook and cranny, every tribe and nation and language and people with the GOOD NEWS – In Jesus Christ, you will find rest for your soul.

For “When the Son of Man comes in His glory, and all the angels with him, then he will sit on his glorious throne and before him will be gathered all the nations.”

At His Great Commission, His Word went out to ends of the earth through His witnesses in every age – the called and ordained to their congregations and missions, the mother and father to their children, the friend to his friend, the co-worker to her co-workers.

The voice of the Shepherd Himself, speaking through each one – going out to the stray, the injured, the weak, the lost sheep with His gracious call, “…come to me all you who are weary and heavy laden, and I will give you rest.”

“I, I MYSELF, have taken all of your sin and that restlessness in your soul upon myself. And I, I MYSELF have given you my yoke of forgiveness and life and salvation – and you will find rest for your souls. “Come, inherit the kingdom prepared for you from the foundation of the world.”

And some would and some wouldn’t. Who knows why? And some will and some won’t. Some were too proud and some too ashamed. Some said ‘not now, maybe later’ – AND LATER CAME TODAY. And some said, ‘this is amazing grace, how sweet the sound that saved a wretch like me.”

On the LAST DAY “…he will separate people one from another as a shepherd separates the sheep from the goats. And He will place the sheep on His right and the goats on His left.”

To those on His right, He says, “Come, you who are blessed by my Father, inherit the kingdom prepared for you from the foundation of the world.”

Only AFTER He has already separated them and pronounced the blessing upon them and brought them into His kingdom, does He commend them for their good works. “For I was hungry and you gave me food, I was thirsty and you gave me drink, I was as stranger and you welcomed me, I was naked and you clothed me, I was sick and you visited me, I was in prison and you came to me.”

The sheep are confused and actually challenge their Judge. They think He’s being TOO GRACIOUS. “When did we see a stranger and welcome you, or naked and clothe you? And when did we see you sick or in prison and visit you?”

They’re not saying they didn’t do these things. They just never realized that what they did for “the least of these” they were actually doing for Him.

In these LAST DAYS, our Lord is always hidden from us – hidden under His Word and Sacraments THROUGH WHICH HE GIVES US HIS LOVE – hidden in our neighbor THROUGH WHOM WE GIVE HIM OUR LOVE.

Only faith can see that. Only faith SEES the Lord hidden in the neighbor. But on the LAST DAY, faith is over – and everything is revealed and “every eye will see Him.”

The goats are also surprised to hear the King’s judgment. “Depart from me, you cursed, into the eternal fire prepared for the devil and his angels.” And for all of the same reasons that the FAITHFUL were commended, these are condemned.

And in their surprise, they say, “When did we see you hungry, thirsty, naked, imprisoned, sick and did not minister to you?” If they had known it was Jesus they would have waited on Him hand and foot. But it really doesn’t take any faith to do that. And it doesn’t take any love to ‘not serve’ your neighbor either. Without faith they were truly blind.

He paid the price for their sins but they would have none of it because they “said that they had no sin – and deceived themselves.” Or they thought they could atone for it on their own sins. And so because they would not receive the Lord when He came to them in LEAST OF ALL, HIS BROTHERS – they will have no Jesus at all.

“Depart from me, you cursed, into the eternal fire prepared for the devil and his angels.”

“And these will go away into eternal punishment, but the righteous into eternal life.” One the FIRST DAY, He SEPARATED the light from the darkness. So He will do again ON THE LAST DAY.

I’ll close with these words from letter to the Hebrews:
“Therefore, while the promise of entering his rest still stands, let us fear lest any of you should seem to have failed to reach it. 2 For good news came to us just as to them, but the message they heard did not benefit them, because they were not united by faith with those who listened. 3 For we who have believed enter that rest, as he has said, “As I swore in my wrath, ‘They shall not enter my rest,’” Although his works were finished from the foundation of the world. 4 For he has somewhere spoken of the seventh day in this way: “And God rested on the seventh day from all his works.” 6 Since therefore it remains for some to enter it, and those who formerly received the good news failed to enter because of disobedience, 7 again he appoints a certain day, “Today,” saying through David so long afterward, in the words already quoted, “Today, if you hear his voice, do not harden your hearts.” (Hebrews 4:1-6)