Trinity Sunday – “The Mystery of the Trinity” – Athanasian Creed

Posted on May 28, 2018 by Lutheran Church of the Resurrection 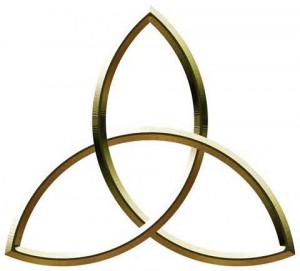 On Trinity Sunday, we recite the Athanasian Creed and say strange things like, ‘the catholic faith is this, that we worship one God, in three persons and three persons in one God, neither confusing the persons nor dividing the substance.’

Rather than trying to ‘simply things’ and say them with familiar language, today we speak deep and profound words and may not fully understand what we are actually saying. “The Godhead of the Father, of the Son and of the Holy Spirit is all one; the glory equal, the majesty co-eternal.’

If you prefer swimming in shallow water where you can always find the bottom with your feet while keeping your head above water, today we are definitely in over our head. ‘The Father is made of none, neither created nor begotten; the Son is of the Father alone, not made nor created but begotten, the Holy Spirit is of the Father and the Son, neither made nor created nor begotten but proceeding.”

Welcome to Trinity Sunday, a day carved out of the Church’s calendar to celebrate the MYSTERY of the DIVINE TRINITY. Three divine persons in One divine being. God is Three in One and One in Three. He is a singular plurality and plural singularity. It’s enough to make your head spin, your head hurt and leave you wanting to sing, “Jesus Love Me, This I Know.”

When Nicodemus came to Jesus at night to engage the Rabbi in a little ‘God-talk,’ he quickly realized he was in over his head. “How can these things be?” TO WHICH WE SAY, ‘AMEN.’

When the prophet Isaiah found himself standing before the ‘thrice holy God,’ he was ‘lost.’ He came ‘undone,’ and all he could do was to pronounce the divine curse upon himself – “woe is me.” TO WHICH WE ALSO SAY, ‘AMEN.’

On Trinity Sunday, we’re directed to jump into the deep end of the doctrinal pool where we are reminded that God is higher and deeper and wider than all the little boxes we try to fit Him into – our own brain being one of the smallest.

So maybe the first thing to say about Trinity Sunday is simply that IT IS GOOD FOR US. And we should probably recite the Athanasian Creed more often than annually. So how about if we start with quarterly.

The temptation that the preacher faces on Trinity Sunday is to try to EXPLAIN the Trinity, as if he has discovered the secret formula for making what the church for over 1,500 years has said was ‘incomprehensible. ’ Rather than trying to solve the ‘mystery,’ I think the best thing to do is to LEAVE THE ‘MYSTERY’ A ‘MYSTERY’ and simply invite you all to jump in and drown in it.

Because really, that’s exactly what you have already done in your baptism. You were not baptized into a ‘Unitarian god,’ but into the Trinitarian God. “I baptize you in the name of the Father and of the Son and of the Holy Spirit.” Whether you were sprinkled or dunked, you’ll never enter into deeper waters than the waters of your baptism where you were swallowed up into THE MYSTERY OF THE TRINITY.

And so even though it really is good for us to want to explore the depths and the heights and the width of this mystery that we have been swallowed up into – we do so knowing that we’re always going to end up on our knees “in fear and trembling,” confessing that the one, true God is so much bigger than we are – and thanks be to God for that.

And we’d be just fine saying ‘amen’ to this sermon right now, if God were just fine with being known only as ‘too mysterious to know.’

But the truth is, God wants us know Him – not simply as ‘incomprehensible mystery’ to be feared, but as the God who ‘became like us’ so that we might know Him ‘personally,’ as a ‘friend knows a friend,’ as child knows his father, as a wife knows her husband, as lost and condemned sinner might know her Savior.

If nothing else then, on Trinity Sunday we are deeply humbled to be reminded of just how far this one, true God has ‘humbled Himself’ to REVEAL HIMSELF to us.

Within the Trinity, in which “the whole three persons are coeternal together and coequal,” it is through the 2nd Person, the Person of the Son, that the Triune God reveals Himself to us – and in no other way.

Luther is so helpful here because he refuses to get all caught up in all the philosophical speculations about who God is. He wants no part of what he calls, “THE HIDDEN GOD,” but only the “REVEALED GOD” – the God who is born of the virgin Mary, crucified on the cross, resurrected on the 3rd day.

This is the one, true God who takes on our flesh and bones and humanity SO THAT we might know Him.
• The Son of God speaks to us in HUMAN LANGUAGE SO THAT we may ‘hear’ Him, and Him, know that we are hearing God speaking to us.
• The Son of God “humbles himself” and “becomes like us” in every way except for our sin, so that in seeing Him suffering and die on the cross, we might know God Himself has suffered and died FOR US and IN OUR PLACE.
• The Son of God comes to us, not with philosophical principles or symbolic illustrations – but profoundly in the simplicity of bread and wine, SO THAT as we do the very human and ordinary thing of eating and drinking, so that we may know that He is both spiritually and bodily present with us – forgiving our sins and strengthening our faith.

Only in knowing Jesus Christ do we know anything about the Father who sent His only son into this world. It is only in fixing your eyes on Jesus Christ and Him crucified and risen from the dead that we know something of the depth of the Father’s love for the whole world and His longing that ALL WOULD believe and be saved and that NONE WOULD perish.

Throughout the history of human race, men and women, in their striving to be “LIKE GOD” have struggled to be content with ‘living in the mystery.’ They want to ‘solve’ it and in ‘solving it,’ prove to themselves that man is not as ‘small’ as were told we are, and God is not so big that we can’t ‘master’ Him.

So, the Athanasian Creed, just like the Apostles Creed and the Nicene Creed, are not interested in solving the mystery of God. Its purpose is simply to mark the boundary lines as clearly as possible so that we remain in the mystery, so that we keep the false gods and the false preachers out. St. Augustine said it pretty well when he wrote, “If you cannot discover what God is, then at least be careful to understand what He is not.”

Three Boundary Lines / Tests
There are three boundary lines in particular that Athanasian Creed wants to mark as clearly as possible SO THAT we STAY WITHIN the boundaries where we’re safe; so that we may DEFEND the one true faith against all the false gods we have created; and so that we properly BEAR WITNESS to the One, True God, apart from whom, no one is saved.

A. 1st boundary:
The first boundary line is this: however we talk about God, we are not to talk about God as if there were three Gods. Any talk of God as more than One crosses the boundary and should set off alarms.

So, when you hear talk about the forces of good and evil, the ‘ying and yang’ that hold the world together, let the alarms sound.

When you hear talk about lots of gods, you’ve got yours, I’ve got mine and they’re all the same… run away and lock the doors.

“We cannot by the catholic faith say that there are three gods or three lords.”

B. 2nd Boundary
The second boundary line is this, however we talk about the Father, the Son and the Holy Spirit, we are not to talk as though there were only ONE PERSON who appears in three different ways – sometimes as ‘almighty Father,’ sometimes ‘incarnate Son,’ and sometimes the ‘force be with you.’

‘The catholic faith is this, there is one person of the father, another of the son, and another of the holy spirit.’
C. 3rd Boundary
The third boundary that dare not be crossed has to do with the way that we talk about the 2nd person of the Trinity in particular. However we talk about the 2nd Person, we are not to talk as though He were God OR man. He is fully God AND fully man.

“For the right faith is that we believe and confess that our Lord Jesus Christ, the Son of God, is God and man.”

Here’s where we get to the cross and resurrection, which all true ‘God-talk’ always has to get to. The question is, who was crucified and died on the cross? Who was buried in a tomb and raised from the dead and ascended into heaven? Was it man? Or was it God? And the answer is BOTH.

When Jesus died on the cross, God died for you because the Son is fully God. It wasn’t just His humanity that died – “for although he is God and man, yet he is not two but one Christ.” What God has joined together in Jesus, He does not rend asunder – even by the cross.

IT’S A MYSTERY. DON’T TRY TO SOLVE IT. And don’t worry that it’s over your head and ‘incomprehensible.’ The Athanasian Creed doesn’t ever tell us that we must ‘UNDERSTAND’ or ‘COMPREHEND.’

It only tells us to ‘WORSHIP and BELIEVE.’ “The Unity in Trinity and the Trinity in unity is to be WORSHIPPED.’ “For this is the catholic faith, which except a man BELIEVE faithfully and firmly, he cannot be saved.”