Posted on September 24, 2018 by Lutheran Church of the Resurrection 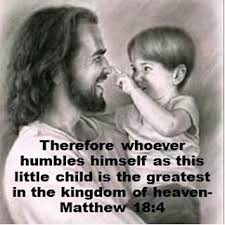 “He said to them, the Son of Man is going to be betrayed into the hands of men. They will kill him, and after three days he will rise.”

“But they did not understand…”

It would have been nice if they would have ‘understood’ that God was about to redeem the whole world through the suffering, death and resurrection of His only-begotten Son- their teacher.

But as is the case with us too, ‘understanding’ the ‘mysteries of the Kingdom of God’ is rarely gained in a classroom or on a retreat. ‘Understanding’ comes by the experience of trial and error; by falling and being lifted up again; by failing and forgiveness; by dieing and rising to life again.

And so off to Capernaum they go. Back into the real world. And along the way the disciples, thinking they are out of ear-shoot of Jesus, argued amongst themselves about who is the greatest. And we wonder – the greatest what? The greatest fisherman, the greatest tax collector, the greatest student? No, the greatest disciple of Jesus.

How do you measure ‘greatness’ when it comes to ‘discipleship’ anyway? John and James would later ask Jesus for a seat on his right and left hand into His glory. Maybe this is how the discussion got started. “Who do you think will get the top spots in His kingdom?”

It’s probably too much to think that any of them would have actually been so crude as to blurt out, “I’m the greatest” and then state the reasons why they thought so. Only a very few are that obnoxious, and they tend to be limited to boxers, wide receivers and political candidates. BUT NOT DISCIPLES OF JESUS.

But we all know how these arguments go. It’s much more subtle than that.

Parents talk with other parents about the accomplishments of their children. There is a steady volley of one-upsmanship until there’s only one left standing and they’re the greatest parent.

Students compare the colleges they attend or have been accepted at or hold degrees from. Those who can’t compete with prestige argue for greatness based on having the best football team or being the best party school.

Pastors do the same thing and it’s all very subtle. Usually it’s a complaint that this is such a tough job because my congregation has gotten so big. Everyone gets the point. Sometimes the criteria is the size of the most recent building addition. Those of us who can’t compete usually call a foul for unnecessary roughness and ask who still studies the scriptures in the Greek and Hebrew for sermon prep.

The point is, we all know what the disciples were “discussing on the way.”

This is the kind of thing that we heard James, in our epistle reading, warn the church to cease and desist from. “If you have bitter jealousy and selfish ambition in your hearts, do not boast and be false to the truth. This is not the wisdom that comes down from above, but is earthly, unspiritual, demonic…. What causes quarrels and what causes fights among you? You desire and do not have, so you murder. You covet and cannot obtain, so you fight and quarrel… You adulterous people!” (James 3:14-15; 4:2,3)

Capernaum was Jesus headquarters when He was in the region of Galilee. Mark says, “they went to the house.” “The house” was most likely Peter and Andrew’s house.

Once inside “the house” Jesus asked, “What were you discussing on the way?” And St. Mark writes, “But they kept silent…” It was one of those “Garden of Eden” questions that makes you want to find the nearest tree to hide behind or a rock to crawl under. “The Lord God called to the man, ‘where are you?” “Who told you that you were naked?” (Gen.3).

But they’re not ready for confession just yet. They know that anything they say can and will be used against them in the divine court of law, and so they take the 5th. Their silence was the silence of guilt.

So, what if Jesus were to ask you the same question? What were you talking about on the way into church today? Or would ‘argument’ be a better word? What were talking about at home, in the car, at the office, at school, on Facebook?

And what about that conversation that you’ve been having with yourself for some time now? That conversation about how much better you are than your co-workers, or classmates, or friends or other members of the congregation.

“A Pharisee, standing by himself, prayed thus, ‘God, I thank you that I am not like other men, extortioners, unjust, adulterers, or even like this tax collector. I fast twice a week; I give tithes of all that I get…” (Luke 18:11-13)

How different is that from St. Paul’s instruction to the church, “Do nothing out of rivalry or conceit, but in humility, count others more significant than yourselves.” (Phil. 2:3)

In response to their silence, Jesus “sat down and called the 12 to him.” “If anyone wants to be first he must be the very last and the servant of all.” It was another one of those, “they didn’t understand” moments for them – and it’s the same for us.

The lesson began with the second announcement that “the Son of Man is going to be betrayed into the hands of men. They will kill him, and after three days he will rise.” He is the One who wants to ‘first among them’ even as He willingly, even gladly, “humbles Himself to become the last and servant of all.”

Jesus Christ is the greatest among us. Any anyone who ‘UNDERSTANDS’ that, is absolutely always going to excuse himself from every contest for ‘greatness’ among others.

Along with all of the disciples, there must also have been a child in the house. “And He took a child and put him in the midst of them.” The Greek language has several different words for child just like we do. The word here is “paidos,” what we would call a toddler, just past infancy, not able to stand up on his own.

Then, St. Mark writes, “Jesus took the child in his arms.” Jesus would use this illustration at least one other time. When His disciples rebuked the little children, the “paidoi,” for interfering with the greater, more important work that Jesus had to do, Jesus said, “Let the little children come to me and do not hinder them for the Kingdom of Heaven belongs to such as these. I tell you the truth, anyone who will not receive the kingdom of God like a little child will never enter it.” And then Mark says, “He took the children in His arms.”

And there it is! There is TRUE GREATNESS for us mortal human beings. This ‘little child’ is ‘the greatest among them.’ Why? Certainly not because of any greatness in this little child. Jesus didn’t select this particular child to become the ‘poster child’ for ‘greatness in the kingdom of heaven’ because He saw something in this child that was ‘great’ or the potential for ‘greatness.’

If you want to be great, REALLY GREAT, you have to let Jesus Christ put His arms around you. Little children have no problem with that. They love it. They line up for it.

But as the children get older and more mature, they get the idea that they’re too big for this stuff. They’re too GREAT for this baby stuff. And by the time the child becomes an adult, we’re downright embarrassed to be embraced like a little child.

He is the Divine Servant – a combination of two words which this world does not understand. But you do.

You understand that, in your baptism, Jesus Christ took you in His arms, and you became the greatest. For who could be GREATER than the one whom Jesus Christ holds in His arms?

You understand that the ‘greatest among you’ is the Divine Son of God, who does not consider ‘greatness’ before God – let alone before man, a thing to be grasped.

Who could ever be ‘greater’ than the one whom Jesus “takes in His arms”? It doesn’t get any greater than that – and neither do you.

But just like the disciples, this is a hard lesson for us to learn too. And we’ll spend the rest of our lives trying to learn it through failure and forgiveness, falling down and being lifted up again. Dieing and rising to a new life in Christ, over and over again.

But just imagine if we could learn what ‘true greatness’ really is. What freedom.
• Freedom from all the “bitter jealousy and selfish ambitions” that causes quarrels and fights among us;
• freedom to quit the rat race altogether and drop out of every competition for greatness;
• freedom “to be last of all and servant to all”
• perfectly content to be like a little child in the arms of Jesus.