Posted on December 10, 2018 by Lutheran Church of the Resurrection 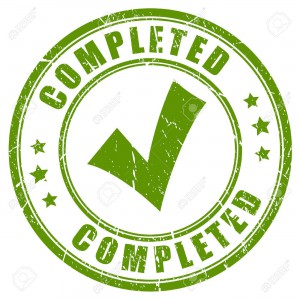 If you had to estimate how many projects around the house that are ‘in progress,’ and that have been that way for a long time, how many would that be? Have you ever made it your goal to learn to play a musical instrument, or paint the house, or read a book, or write a book? But somewhere along the line, you either got distracted or lost interest or took a break… and the instrument hasn’t been played in years and the paint is still in the can and the book is still unfinished? Have you ever made the decision to go on a diet or join the gym, or quit smoking, and you started out with a bang, but then petered out and eventually quit?

Doesn’t it just seem as though starting new projects is a whole lot more fun and exciting than seeing them through to the end? The excitement, the energy, the enthusiasm we had in the beginning new things starts to diminish as we encounter certain ‘unplanned obstacles,’ things never go quite the way we thought they would, and usually for the harder or more expensive, hardly ever the easier or cheaper.

Getting to the goal requires a lot more practice and time and focus and sacrifice than we thought it would. The reward is so far in the future that we can’t see it and discouragement sets in. And before you know it, before we realize it, we’re off on a new project, because beginnings are fun and exciting.

But we’re not quitters. We’re not the kind who gives up on what we’ve begun. We just put it aside, promising ourselves that one day, when the time is right, when we have more time, we’ll take it up again and “bring to a completion that good work we began.”

There are also those projects that NEED TO BE BEGUN by us that we really don’t want to begin. A door that doesn’t shut right, a leaky faucet, and that ‘Spring Cleaning’ that never happened.

And what about those walls that are in your house that need to come down. These are walls that you built with an unkind word or selfish deed, walls that were built of broken promises. When will you begin the project of taking those down? All that’s required to complete this project is a sincere apology, an ‘I’m really sorry,’ along with the honest intention to do better. But that requires a contrite heart and a large measure of humility and humbleness, which is not fun and exciting at all. How many of THOSE projects are there that you still need to work on?

Compare all of this to those wonderful words that we heard in our Epistle reading today from St. Paul to the Philippians, “I am sure of this, that he who began a good work IN YOU will bring it to completion in the day of our Lord, Jesus Christ.”

And just what are those ‘projects’ which our God has set out to accomplish that He will “bring to completion in the day of our Lord, Jesus Christ”?

His creation, for one. God’s grand project to create a world where men and women, boys and girls and ‘all God’s creatures’ live together in peace and love, and with one heart and one voice in perfect harmony, “the morning stars sing together,” and ‘the trees clap for joy’ all the earth praises and worships their Creator without ceasing.

When our Lord created the world and everything in it, it was His “good work.” In fact, His “very good” work. It was perfect in every way; just as He planned it to be.

But the one creature that He made ‘IN HIS OWN IMAGE AND LIKENESS,’ that He gave A ‘FREE WILL’ to, used his ‘free will’ to rebel against His creator, and reject the ‘image and likeness’ of the God in which he was made. All so that he might bring this grand project of God’s Creation to its completion according to his own plans and purposes.

How many of the great social projects with their noble plans for establishing a safe and peaceful world where men and women can live together in peace and harmony with one another, remain utterly not only incomplete but total failures? How many projects have we launched to fix the environmental mess that we have brought on God’s beautiful creation, have either backfired or collapsed long before completion?

Because we are blinded by our sin, we cannot see the end of what we begin. We can’t see challenges and obstacles and pitfalls along the way. We overestimate our abilities and underestimate our weakness and corruption.

And we grow weary and frustrated and impatient and we don’t live long enough. How high is that mountain of well-intentioned and naive projects to bring this world to the “completion” that the Creator brought it to in six, 24 hour days? How much pain and suffering and death have we brought to God’s VERY GOOD CREATION because we thought we could do it better than Him?

On THAT DAY, our God will unveil His “new heaven and the new earth” just as He told long ago that He would do, “For behold, I create new heavens and a new earth, and the former things shall not be remembered or come into mind.” (Isaiah 65:17).

Much more recently, He sent word to us that this “new creation” IS ALREADY COMPLETE. And He’s just waiting for the “day of our Lord Jesus Christ” to be unveiled, which could be any day now.

A man named John was taken behind the curtain for a sneak preview. He writes of what he saw. “Then I saw a new heaven and a new earth, for the first heaven and the first earth had passed away…And I heard a loud voice from the throne saying, “Behold, the dwelling place of God is with man. He will dwell with them, and they will be his people, and God himself will be with them as their God. He will wipe away every tear from their eyes, and death shall be no more, neither shall there be mourning, nor crying, nor pain anymore, for the former things have passed away.” (Rev. 21:1-4)

How naive and absurd is it to actually believe that mankind can accomplish the grand goal of creating a world like the one just described by our projects and programs and movements, no matter how politically supported and well-funded they may be?

But to live with hope for the future based on the sure and certain Word of God, WHO NEVER BEGINS A PROJECT HE DOESN’T BRING TO COMPLETION – that’s the only hope that makes any sense at all.

Peter declares his hope for the future, based not on the accomplishments of fallen and sinful man, “But according to his promise we are waiting for new heavens and a new earth IN WHICH RIGHTEOUSNESS DWELLS.” (2 Peter 3:13)

Or, to say the same thing much more personally, “we are waiting for new heavens and new earth in which righteous people dwell.” And this brings us much closer to what Paul was talking about when he wrote to the Philippians, “I am sure of this, that he who began a good work IN YOU will bring it to completion in the day of our Lord, Jesus Christ.”

This is all part and parcel of God’s grand project for a ‘new creation.’ Because really, there’s something not quite ‘COMPLETE’ about a ‘new heavens and a new earth, in which righteous people dwell,’ if there are no ‘righteous people.’ Right?

And the evidence here is irrefutable, “There are NONE who are righteous, no, not one…” ; no one understands; no one seeks for God. All have turned aside; together they have become worthless; no one does good, not even one.” “Their throat is an open grave; they use their tongues to deceive.” “The venom of asps is under their lips.” “Their mouth is full of curses and bitterness.” “Their feet are swift to shed blood; in their paths are ruin and misery, and the way of peace they have not known.” “There is no fear of God before their eyes.” (Romans 3:10-18)

And so God has begun a “good work in you.” It is His ‘good work’ to convert you from UNRIGHTEOUS to RIGHTEOUS, from SINNER to SAINT, from the OLD ADAM to the NEW MAN REMADE / BORN AGAIN, in the image of Christ.

You look ONLY to His Word and Promise. For “I am sure of this, that he who began a good work IN YOU will bring it to completion in the day of our Lord, Jesus Christ.”

For this grand project that God has begun in you HAS ALREADY BEEN COMPLETED. As John the Baptist preaches his fiery sermons in the region of the Jordan, he is announcing that the One whom God the Father has sent into this world with His “good works” to accomplish has arrived. A few years later, we will overhear Jesus in prayer to His Father say, “I glorified you on earth HAVING ACCOMPLISHED THE WORK you gave me to do.” (Jn. 17:4)

And then, from the cross, the same “MESSENGER OF THE COVENANT” announced for the whole world to hear, “It is finished!”

The final day of our Lord Jesus Christ however has not yet come. And that’s because the total number of the ‘righteous’ have not yet been converted from unrighteousness. There are still more baptisms to take place.

When the risen Christ gathered His apostles with him on the mountain, He commissioned them to go to “all nations baptizing them in the name of the Father and the Son and the Holy Spirit.” (Matthew 28:19).

And that work continues to this day. And every day now God continues to “begin His good work” in men and women and boys and girls, filling His new heaven and new earth with righteous people, “that they may be My people and I may be their God.”

Don’t ever think that this grand project that God has undertaken will be forgotten or abandoned or that it will never reach completion. “For I am sure of this, that he who began a good work IN YOU will bring it to completion in the day of our Lord, Jesus Christ.”