Posted on December 31, 2018 by Lutheran Church of the Resurrection 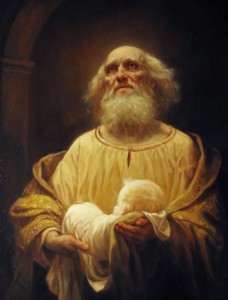 Joseph and Mary bring their 40 day old baby to the Temple because THIS IS WHAT BELIEVERS DO. If you want to live according to God’s Word and build your new family on God’s Word, there are a couple of things that you do 40 days after your baby is born.

1st, new parents bring themselves to the temple for purification. In a way, you have participated in Adam and Eve’s guilt by bringing a sinner into the world. So, through this ‘LITURGICAL ACT,’ God reminds and teaches His people about the doctrine of ‘original sin.’

And in the same ‘LITURGICAL ACT’, God reminds and teaches His people about the doctrine of ‘forgiveness.’ They’re coming for to the Temple for ‘forgiveness,’ because THIS IS WHAT BELIEVERS DO.

Doing this on the 40th day of the child’s life, connects them to the flood of Noah where God purified a sinful and guilty world in 40 days; and to the 40 years in the wilderness where Israel learned how to live their lives according to God’s Word – WHICH IS WHAT BELIEVERS DO.

The 2nd thing that is going on here has to do with Israel’s exodus out of Egypt. The night before the Exodus was the night of Passover, when a lot firstborn males in Egypt died, while the firstborn males of Israel lived.

And NOT BECAUSE the Israelites were any less sinful and more holy than the Egyptians. It was only because innocent blood was shed that ATONED for the sin of those so marked with that blood. In other words, if your firstborn son is alive, you owe his live to God’s grace and mercy.

So, both technically and legally speaking, that firstborn son of yours really belongs to God. And so do all your other children. But God, in His mercy, gives you the chance to BUY HIM BACK, which is what it means to ‘REDEEM.’

All it costs is one of those lambs like the ones used in Egypt on the Passover. Or, if you’re too poor for a lamb, a couple of pigeons will do. And so parents bring their firstborn son to the Temple to ‘redeem’ him. And in this ‘LITURGICAL ACT’ God reminds and teaches His people the doctrine of ‘redemption.’

By its connection to the Exodus, this LITURGICAL ACT also connects this family along with their child to the whole people of Israel. Picture it! We know how babies are born. They’re surrounded by water but come through it by way of a narrow canal. So God birthed His firstborn son, Israel, by bringing the entire nation through the water by way of that tiny birth canal and delivered them safely to the other side.

As Joseph and Mary, along with countless ‘devout’ mothers and fathers, bring their firstborn son to the Temple on the 40th day to engage in this ‘LITURGICAL ACT,’ the ‘LITURGICAL ACT’ forms their very ‘identity’ as the people of God.’ They are one with their forefathers throughout history whom God brought safely through the Red Sea.

And so, as we see Joseph and Mary bring THEIR firstborn son to the Temple on His 40th day, what we are seeing is, not only are THEY identified with people of Israel, God’s firstborn son, but so also is the baby that they bring.

And it’s right here where all of this LITURGICAL ACTION, EXPLODES in mystery and amazement and wonder and awe.
• For this child is the ‘lamb’ that will atone for all of their sin and purify them.
• This child, is BOTH the ‘first born son of Mary’ and the ‘only-begotten Son of God,’ and as such, He will be the ‘redemption’ that God Himself will put forward to ‘buy back’ His first-born son – Israel.

So, it’s no wonder that as Joseph and Mary enter the Temple with their firstborn son, some remarkable things happen. They’re met by two people at the Temple, a man named Simeon and a woman named Anna. They were on the schedule to be “Greeters” that day.

Anna, we are told, is of the ripe old age of 84. She has had her share of sorrow and pain having been widowed after only seven years of marriage.

As for Simeon, we’re told that he is “righteous, devout and waiting for the consolation of Israel and the Holy Spirit was upon him.” He sounds like one of the elders of this congregation.

Simeon and Anna represent all of those who have been faithfully waiting for the “time to fully come” for God to fulfill His promise to send a Messiah to “redeem Israel.”

Simeon knows that he is living in the “fullness of time,” because the Holy Spirit has somehow told him that he was not going to die until he sees the “consolation of Israel.”
We’re not told how long Simeon had known this. Was it a long time and was Simeon ready to die? Or was it just recently?

Either way, Simeon BELIEVES what the Holy Spirit revealed to him. That’s what Luke means when he says that Simeon was “righteous.” In the bible, someone is called ‘righteous,’ not because he’s perfect and sinless, but because he believes the Word and promise of God – as in “Abraham believed God and it was credited to him as righteousness.”

For Simeon, it’s none of this ‘SPIRITUAL BUT NOT RELIGIOUS’ stuff we hear so much of today. He’s both “righteous” and “devout” which means, he’s regularly at the Temple engaging in the “LITURGICAL WORSHIP” that goes on there. “Righteous and devout” always goes together.

And then one day, a young couple entered the Temple with their baby boy. And Simeon was there. And somehow Simeon knew. And went over to this couple, his name was Joseph and hers was Mary. And “He took [the baby] up in his arms and blessed God and said, “Lord, now you are letting your servant depart in peace, according to your word.”

“Depart in peace.” Familiar words that we hear after we receive the Lord’s Supper. Maybe you thought “depart in peace” meant that it time to get up and return to your seat. But no, these are Simeon’s words and they mean, ‘it’s a good time to die.” FOR LIKE SIMEON, YOU TOO HAVE JUST HELD THE JESUS CHRIST IN YOUR HANDS.

“My eyes have seen your salvation that you have prepared in the presence of all peoples. A light for revelation to the Gentiles, and for the glory of your people Israel.”

“And his father and his mother marveled at what was said about him.”

Which I’ve always felt to be odd. Joseph and Mary knew who this baby was. The angel Gabriel told each of them personally. To Mary he said, “you will conceive in your womb and bear a son, and you shall call his name Jesus. He will be great and will be called the Son of the Most High. And the Lord will give to him the throne of His Father David, and of his kingdom there will be no end.” (Luke 1:31-33).

And to Joseph, the same angel said “…for that which is conceived in her is from the Holy Spirit. She will bear a son, and you shall call his name Jesus, for he will save his people from their sins.” (Mat.1:21)

They knew who He was, and yet still, as they hear this sermon from Simeon about their son, they “marveled at what was said about him.”

I think it’s like that for us too. We know who Jesus is. We know that He is our Redeemer and the Savior. And yet we love to hear Christ preached, over and over again. And every time, we ‘marvel at what is said about him.’

And because no preaching of Christ is complete without the preaching of the cross, Simeon says, “Behold, this child is appointed for the fall and rising of many in Israel, and for a sign that is opposed and a sword will pierce through your own soul also, to that the thoughts from many hearts may be exposed.”

Guided by the Holy Spirit, Simeon warns this child will not be welcomed and accepted by all. Some will see their ‘Savior’ and confess, “He is my Lord.” Some will see and confess something much less than this.

Even Mary is no exception. Just because she is the mother of Jesus doesn’t mean that she will not also be confronted by the cross of Christ crucified. But for Mary, it will be particularly painful. Any mother who has ever had to bury her own son knows something of the sword that pierced Mary’s heart.

And in a way, we all share Mary’s pain because Jesus is our Brother. And to see our Brother mocked and flogged and crucified pierces our heart too. Especially when we think that it is because of us and for us.

I realize that it may seem like we’re getting ahead of ourselves here. He is, after all, just an infant, only 40 days old and this is the season of Christmas, not Lent. Yet even here, He is not known apart from His cross. He has come to mark the door post and the lintel of His whole creation, with the His blood – that we may not die but live.

After the sermon concludes, in good ‘LITURGICAL FORM,’ Anna shows us how we respond to the Presentation of our Lord. “She began to give thanks to God and to speak of him to all who were waiting for the redemption of Jerusalem.”