Posted on January 28, 2019 by Lutheran Church of the Resurrection

“On the third day there was a wedding at Cana in Galilee, and the mother of Jesus was there. Jesus also was invited to the wedding with his disciples…” 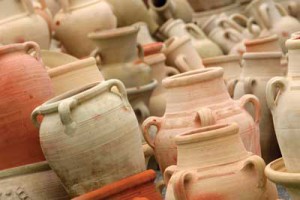 There are aspects to life in a small town like Waterville that are very nice. It’s not unusual to see someone you know at the grocery store or the post-office, and the UPS driver knows that if no one is at the church he can deliver his package to the pastor’s house which he knows where it is located.

Our text today opens after the wedding itself has taken place. The wedding reception is in full swing.

It was the custom of the day that the reception was hosted by the newlyweds. The husband was responsible for making the preparations and making sure that everything was ready. The celebration was for the whole village and would last for up to seven days.

Every time I hear this text, I can’t help but recall a wedding of one of Deb’s college classmates years ago. The couple was from a small town in up-state Pennsylvania where almost everyone was of Middle-eastern descent and attended one of the several Eastern Orthodox churches in the town.

After the wedding, everyone headed over to Luanne’s parent’s home for the reception. There was a polka band and lots of people dancing in big circles with their arms linked together. Lot’s of laughing and talking and singing and great food and lots to drink. I remember asking someone how long the reception lasted. And the reply was, “till the booze runs out.” Deb and I lasted a day and a half and were accused of being party poopers for leaving so early. We later learned that we only made it half way through.

I don’t know what you’re image of Jesus is, always serious or even sad or mad. But as you read the gospels it becomes pretty obvious that our Lord loved to share in the joy of life together. Jesus never counted it a sin to be happy or to have fun.

So if you want, it’s perfectly alright to picture Jesus dancing the polka and doing the ‘chicken dance’ and some ‘Texas line dancing’ along with everyone else at this wedding reception in Cana.

I want to pause here for just a moment to comment on this whole business of the connection between weddings and joy and celebration. Historically, weddings have universally been recognized as times of great joy and celebration. Which is a ‘carry forward’ from the joy that God had when He brought Eve to Adam and married them in the Garden of Eden in the beginning. It’s a part of being made in the image of God.

But today, there are some weddings that frankly, we have a hard time summoning up true feelings of joy and that, just as frankly, we can’t truly celebrate.

A question that we never thought we’d ever have to ask is now being asked more than we ever thought it would. “I’ve been invited to the wedding of my girlfriend who is marrying another woman. What do I do? Should I go?” “I just got an invitation in the mail from a relative, inviting me to the wedding of their son to another man. What should I do? How should I respond?”

Back to the wedding reception in Cana of Galilee.

One place where some of you might be able to connect to a middle-eastern village wedding is in the fact that it takes a lot of preparation. You don’t just invite the whole village over for a week long party without lots of advanced planning and preparation.

Later, Jesus would tell a parable about a man who invited his village to his wedding reception. And after counting those who said they would come, he slaughtered the necessary number of animals for the banquet. But at the last minute, a lot of folks made excuses for why they couldn’t attend. In a day before refrigeration, what about all that meat that would spoil?

Here, at this wedding in Cana, the problem is just the opposite. The groom has UNDERESTIMATED the amount of wine his guest would drink, and the wine ran out. The issue for the newlyweds goes way beyond just ‘embarrassing.’ This is not like coming up a few stuffed chicken breasts short. This is shameful in a way that’s hard for us to understand because we’d just have some more delivered in.

For some reason, the servants make their way to Mary and tell her the problem, which strongly suggests that Mary is a part of this family and has some authority here. Mary turns to her son and says, “they have no wine.” We wonder what she was thinking? What did she expect Him to do?

Jesus replies to Mary in a way that that sounds gruff. “Woman, what does this have to do with me? My hour has not yet come.” John has told us three times already in this account that Mary is the “mother of Jesus.” But Jesus refers to her here IN PUBLIC as ‘woman.’

Much later, as He is hanging from the cross it will be the same. Jesus will point to John and say to Mary, “Woman, behold you son.” Three days before this wedding, Jesus had been baptized and His ministry had officially begun. He is His mother’s Lord and Savior and the Son of God before His mother’s son.

And Mary is now ‘believer’ before mother of Jesus, her turns to her Lord for help in her time of need. She doesn’t tell Him what He should do, like mothers tend to do. She simply trusts that whatever He does or doesn’t do will be exactly the right thing. She replied to the servants, “do whatever He says.”

“Now there were six stone water jars there for the Jewish rites of purification, each holding twenty or thirty gallons.”

John tells us what those stone water jars were used for. The Jewish ‘rite of purification’ was kind of like our saying grace before we eat. Before eating you held one hand outside the rim of the jar and splashed water onto it with the other hand. And then switched and washed the other hand.

Wine was stored in skins, not in stone jars. But Jesus directs the servants to “fill the jars with water.” You would think that Jesus would have told the servants to fill the ‘wine skins’ with water. By the response of the “master of the feast,” it sure wouldn’t have been the first time the hosts watered down the wine to make it stretch farther.

The servants are great examples of faith to us all. The problem is, “the wine has run out.” And Jesus tells them to fill the stone jars with water. “Maybe He misunderstood. It’s not the water in the purification jars that has run out, Jesus. It’s the wine in the wine skins that has run out.”

But Mary said, “Do whatever He says.” And they do.

And what must they have been thinking when He said to them, “Now draw some out and take it to the master of the feast”? But all that we read is, “So they took it.”

And we say, “O Lord, make me like those servants.”

Now we come to the real drama in this account. The “master of the feast” doesn’t know what has just taken place. We do. The servants do. But the guy whom the bridegroom had put in charge of running the show doesn’t know.

“When the master of the feast tasted the water now become wine, and did not know where it came from…”

But this much he knows – THIS IS REALLY GOOD WINE! In fact, this is much better than the wine the wine they had been drinking.

And the wonderful irony here is that HE THINKS THAT THIS IS ALL PART OF THE BRIDE AND GROOM’S PLAN. He thinks it’s intentional on their part, and he credits them for their amazing hospitality. “Everyone serves the good wine first, and when people have drunk freely, then the poor wine. But you have kept the good wine until now.” They’ve gone overboard for the village.

They were on the verge of being terribly embarrassed and ashamed in front of the whole village. But now they’re lavishly praised in front of all of their guests.

AND WHAT ABOUT THE BRIDE AND GROOM? What were they thinking? They knew that they had NOT PLANNED THIS. And whatever was going on, they knew that all this praise that was being lavished on them was completely undeserved.

And it’s right here where this account becomes the picture of the grace and love of God that Jesus has come into the world to accomplish. And we’re in this picture.

How embarrassed and ashamed we would all before God and one another – and rightfully so because of our sin, had not Jesus, our Lord, intervened and done what only He can do to turn a total disaster into a great celebration of joy. Just like that wine that ran out, “we all fall short of the glory of God.”

But Jesus speaks His Word into our emptiness, and turns our shame and rejection into joy and celebration. And we hear our Lord say to us, “well done good and faithful servant.” And we are dumbfounded because we know that we haven’t done anything.

John says, “this, the first of His signs, Jesus did at Cana in Galilee, and manifested his glory.” John uses the word ‘sign’ in the same way that the other New Testament writers use the word, ‘miracle.’

Jesus never does ‘miracles’ for the sake of doing a ‘miracle.’ ‘Miracles’ are always ‘signs’ that point to something else – and that something else is the glory of the divinity of Jesus Christ and the joy and celebration of the new life He has come to give us.

John he concludes his gospel saying, “Jesus did many other signs in the presence of the disciples, which are not written in this book, but these are written so that you might believe that Jesus is the Christ, the Son of God, and by believing, you may have life in His name.” (John 20:30-31).

The fact that John opens this account by telling us that this happened on the 3rd day is enough to alert us that God is about to uncork something very special for His beloved bride. He has been pouring out His salvation and grace on His people from the first day that men and women needed saving. But now we see that He has saved the best wine for last.

Because there is no wine in this world that is able to produce the kind of joy that our Bridegroom desires for His beloved bride, He pours out a wine that gives the deep joy of forgiveness for all of your sins, and a seat at the eternal wedding banquet in heaven.

Today, your Bridegroom comes to you with His wine that never runs out and says, ‘take and drink.’

As we drink this finest of wines that ‘purifies’ us completely, and inebriates us with the Holy Spirit, we are filled with deep joy and genuine celebration.