Posted on February 11, 2019 by Lutheran Church of the Resurrection 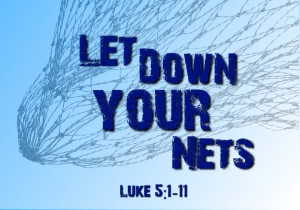 So we will do well to pay careful attention to the liturgy and the readings during this season of Epiphany, because from Epiphany we move into the season of Lent, where the glory of God in the face of Jesus Christ will be hidden from our eyes, so covered over with our sin and our death that all we will be able to behold is a “despised and rejected man, whom we esteemed not and from whom we hide our face.” Now is the time to impress upon your heart and mind that this Jesus Christ, is the one, true God, so that you will know who it is who has taken your sin and your death upon Himself and suffered all, even death on a cross, so that you may one day behold His glory, face to face.

Our gospel text opens on a beach on the Sea of Gennesaret, which is also known as the Sea of Galilee. Luke writes, “… the crowd was pressing in on him to hear the word of God.” A pretty good picture of the church, if you ask me. A packed church where everyone wants to sit in the front pew to get as close to the preacher as possible.

In this church there was no railing and no pulpit, so Jesus had to improvise. “He saw two boats by the lake, but the fisherman had gone out of them and were washing their nets.” Jesus went over to one of the boats which happened be Peter’s. He gets in and said something to the effect of, “I’d like to use your boat as my pulpit. How about pushing off just a bit?” “And He sat down and taught the people from the boat.”

It would have been nice if Luke had told us just what Jesus taught the people that day. Did it have something to do with what follows? Luke doesn’t say. But, what I think we can say is that the Divine Service conducted on this beach is the pattern our Lord has established for His church in every age. First, the service of the Word, where we press in to hear the Word of God. Then the service of the Sacrament, where the Word of God is pressed in on us in a very tangible, physical way.

“And when He had finished speaking, he said to Simon, ‘Put out into the deep and let down your nets for a catch.”

It always amazes me when I see how quickly our Lord moves from calling us to sit still and listen to His Word as He teaches us ‘spiritual things,’ to calling us to get up and go to work. We’re not to hear the Word of God which says that you have been saved by grace alone, through faith alone for Christ’s sake alone – and not by your works, and then leave saying, ‘now, I don’t have to do anything. In fact, God doesn’t want me to work.’

No, from hearing the Word of God, which is, “since we have been justified by faith, we have peace with God…” we go to work at whatever our present calling and vocation in life might be as beloved children of God.

We dare not over-spiritualize what’s going on here. This is very practical stuff. Peter and the others are fisherman. That’s their daily vocation. Jesus is concerned that they have enough food to put on the table for their families. So Jesus says, “let’s go fishing.” He could have commanded the fish to jump right up onto the beach for these fishermen to simply collect and take home, He doesn’t do that. He will provide them food for their table through their work and vocation!

“And Simon answered, ‘Master, we have toiled all night and took nothing! But at your word I will let down the nets.”

Despite his bit of whining, Peter’s response is commendable and should stand as an example to us all. What Jesus tells these men to do is contrary to experience and common sense. Experienced fishermen know that the best times to fish are the evenings. And if you’re net fishing, which they are, you throw your nets along the shallows and not in the deep water. But Jesus turns this around and tells them to put out into the deep during the day.

Generally speaking, when God’s Word contradicts human reason, we will side with human reason and reject God’s Word. We all think we know better than God. But Peter shows us what it means to live by faith. When God told Abraham to take his son, his only Isaac to the mountain to sacrifice him, this made no sense at all, because God had promised that it was through Isaac that God’s promise would be fulfilled. But Abraham took Isaac to the mountain.
Here, Peter follows in Abraham’s footsteps.

Just think of what this world would be like if everyone responded to God’s Word like this. How differently would our families and our marriages and our economy and our politics be if we were to say, ‘I know it sounds foolish and even dangerous to go against all of my own reason and experience and what seems like common sense, but I’m going to leave all of that behind and listen to my Lord and stick to His Word.’

“Master we have toiled all night and took nothing! But at your word I will let down the nets. And when they had done this, they enclosed a large number of fish, and their nets were breaking. They signaled to their partners in the other boat to come and help them. And they came and filled both boats, so that they began to sink.”

In the beginning, when the earth was formless and void and darkness was over the face of the deep and the Spirit of God was hovering over the face of the waters, God spoke, and the emptiness was filled and the formless too shape. And on the 5th day, God said, ‘Let the waters swarm with swarms of living creatures… And it was so.”

“Behold Peter and James and John, God is very near you. But Peter’s response is very strange. Instead overwhelming joy, Peter experiences overwhelming fear. There is a crisis at sea that has nothing to do with the fact that the boats were sinking. The crisis is – the fishing is too good. This is too generous.

This is Peter’s ‘Epiphany.’ He now realizes who it is who is in this boat with him. He who knows what is in the dark, deep of the sea and is able to call it to the surface has called that which is in the dark, deep of Peter’s heart to the surface. And Peter knows that he too has been caught in the net. And now, not only this boat, but the whole world is too small for him.

Unlike his brother Adam, there is nowhere for Peter to hide from God. So Peter speaks those words that cause the angels in heaven to gasp and turn their heads in horror, “Depart from me, for I am a sinful man, O Lord.”

When it came to the way we are to carry out our daily work and vocation, Peter was a great example to us all. “But at your word I will let down the nets.”

But here, as it concerns how we are to regard our Lord in light of our sinfulness, Peter is an example that we should NOT follow. For Peter does not believe that Christ is gracious and merciful and has come into this world to redeem sinners just like Peter, and just like you.

It is of course, perfectly true, that not only Peter, but all of us must confess, “I am a sinful man, O Lord.” This is precisely the way we begin the Divine Service. “Let us consider our unworthiness and confess before God and one another that we have sinned in thought, word and deed, and that we cannot free ourselves from our sinful condition.”

But we do not then command our Lord to “depart from us” to let us alone in our sin or give us some time to work things out and make things right. No, we implore Him to forgive us. For that is what our Lord has come into this world to do.

“Jesus said to Simon, ‘do not be afraid…’” In other words, “don’t look at your sins Peter. Look at me, for I am gracious and merciful and abounding in steadfast love. I have come to take away your sins and cast them into the depths of the sea. I am not here to destroy you but to bless you and keep you; to shine my face upon you and be gracious to you; to be favorable to you and to give you peace.”

“Peter, you did so well when you said ‘fisherman, be gone’ and simply trusted Me. Now you should say, ‘sinner, be gone.’ And simply trust Me.’ A different kind of person is needed here, namely, one who doesn’t worry about whether he’s a sinner or holy, but simply and without fear, puts complete trust in Christ’s word of forgiveness.

Let us be like those on that beach by the Sea, who were pressing in on Jesus to hear the word of God, that we may be strengthened in this one, true faith, not only that we might go to heaven when we die, but also that we may do the work that God has given us to do now, according to His Word.