Posted on March 21, 2019 by Lutheran Church of the Resurrection

“The Lord is my shepherd; I shall not want.” 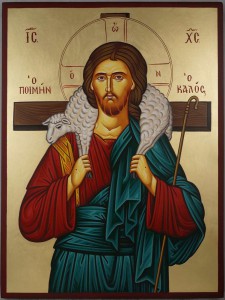 In the first verse of this beloved 23rd Psalm, David gathers together in one sentence the theme of the entire psalm – “since the Lord is his shepherd, he lacks nothing, he has all that he needs, he shall not be in want.” In the five verses that follow, he says nothing different than this and nothing in addition to this. What follows the first verse of this psalm is nothing more and nothing less than a rich development of this single theme – “The Lord is my shepherd; I shall not want.”

And so as we make our way through this Psalm and come to these ‘figurative’ words, we’re always going to want to get at the meaning in the ‘picture.’ Today we consider the meaning of “He makes me lie down in green pastures. He leads me beside still waters.”

I. He makes me lie down.
David knows shepherding because he is a shepherd. So David knows that sheep are not like dogs. Dogs can be trained to sit or lie down on command. Not so with sheep. Sheep will only ‘lie down’ when they have had plenty to eat and drink and are not threatened by predators. It’s said that the barking of even one stray dog or the howl of a coyote a mile away is enough to cause a flock of sheep to jump us and even run off if not stopped by an alert shepherd.

So, when we hear David say, “He MAKES me lie down,” we don’t want to think this happens by force or by special training like it does with a dog. It happens only when the sheep are well fed and secure. Only then will they ‘relax’ or ‘settle down’ and allow the food to digest and rest.

So, nothing can be better for the sheep than when their shepherd leads them to a place with plenty of food and water that is safe and secure. And that is what David is telling us that those who are of the Lord’s flock enjoy – fullness and satisfaction and security that set them free to ‘lie down,’ to ‘relax,’ to ‘settle down.’ Where this happens, the follower feels as though ‘life is good’ and ‘I lack nothing.’

II. In green pastures.
“He make me lie down IN GREEN PASTURES.”

It might be hard for us to grasp what David is saying here because we’re not used to the climates and seasons in the middle-east where it typically rains during the months of November through February, and then is dry for the other eight months. Green pastures are readily accessible for only three months of the year. So, it’s up to the shepherd to find patches of green grass for his sheep to feed on and to lead them; as the season goes on, it becomes harder and harder because there’s more and more desert in between.

But the Lord knows where these ‘green pastures’ are and He leads His followers to them. For David and for all followers of the Lord throughout history, those ‘green pastures’ that believers feed on is God’s Word and Sacraments. And when the believer is in the gathering of other believers who are all being fed with God’s Word and Sacrament, ‘life is good,’ and ‘I shall not want.’

Another psalmist put it this way, “For a day in your courts is better than a thousand elsewhere. I would rather be a doorkeeper in the house of my God than dwell in the tents of the wicked.” (Psalm 84:10)

In so many ways, the world we live in is like a desert. It’s filled with all kinds of things and luxuries and activities in which we foolish sheep try to find our satisfaction and contentment and security without success. We can be like the Prodigal Son who tried to satisfy his hunger with the pods that even the pigs wouldn’t eat and remain unsatisfied.

But when we are in the company of believers gathered around God’s Word and Sacraments, it’s real satisfaction and genuine rest for our soul.

Comparing the fulfillment and contentment that he receives from God’s Word to the emptiness and restlessness he gets from the world, Paul writes, “Indeed, I count everything as loss because of the surpassing worth of knowing Christ Jesus my Lord. For his sake I have suffered the loss of all things and count them as rubbish, in order that I may gain Christ and be found in him, not having a righteousness of my own that comes from the law, but that which comes through faith in Christ, the righteousness from God that depends on faith— that I may know him and the power of his resurrection, and may share his sufferings, becoming like him in his death, that by any means possible I may attain the resurrection from the dead. (Phil.3:8-11)
This is the deep satisfaction that is ours when we eat the food our Lord gives to us. Even in the wilderness, Jesus commands His flock of 5,000 to, as we heard St. Mark skillfully put it, “sit down on the green grass.” “And they all ate and were satisfied.” (Mark 6:39,42).

“The Lord is my shepherd, I shall not want. He makes me lie down in green pastures.”

III. He leads me.
But food and eating is not all that the sheep needs. It also needs water to drink. And so, the Good Shepherd also, “leads me beside still waters.”

“He leads me…” He doesn’t drive me or push me. Middle-eastern shepherds will move their flock along either by going in front of them or by following behind them. Those shepherds that follow behind their sheep use sticks to prod the sheep along and keep them from wandering off. Those shepherds that go in front of their flock however lead them by speaking to them with a distinct call that the sheep quickly learn to distinguish as the voice of their shepherd.

The story is told about a time in the 1930’s just after some rioting in Palestine when all of the sheep and cattle were confiscated by the government. The citizens were permitted to redeem their livestock for a price. One of the military officers in charge wrote a report that included the account of a young shepherd boy who was an orphan who had a small flock of only eight sheep on which he depended for his survival. After somehow scraping up the funds to redeem his sheep and paying the ransom due, the officer told him to take any eight sheep he wanted because it would be impossible for him to identify his own sheep from among the thousands. The boy replied that he would only take his own sheep. Giving the call that was unique to him, eight sheep quickly separated themselves from the thousands and followed him.

This is the imagery that our Lord used in His speech to the Pharisees. “He who enters by the door is the shepherd of the sheep. To him the gatekeeper opens. The sheep hear his voice, and he calls his own sheep by name and leads them out. When he has brought out all his own, he goes before them, and the sheep follow him, for they know his voice. A stranger they will not follow, but they will flee from him, for they do not know the voice of strangers.” (John 10:2-5)

The reason that so many followers of our Lord go astray and follow false gods and run after empty promises that cannot satisfy the hungry heart, is that they don’t know the voice of the one, true God, and are easily deceived.

The ‘strangers’ are the ‘false shepherds’ we heard about in our first reading who are only in it for their own prophet and gain. But what good news we heard that the Lord God doesn’t abandon or forget his sheep gone astray, but goes after them. “I, I myself will search for my sheep and will seek them out… I myself will be the shepherd of my sheep, and I myself will make the lie down, declares the Lord God. I will seek the lost, and I will bring back the strayed and I will bind up the injured, and I will strengthen the weak…” (Ez.34:11,15-16)

IV. BESIDE STILL WATERS.
“He leads me beside still waters.”

One of the quirky things about sheep is that they will not drink from moving water. A shepherd from southeast Turkey who became a Christian pastor once wrote that when a flock of sheep comes within sight or sound of water, they’ll all begin to run right for it, which shows that they are thirsty. But when they arrive at the source, if it is moving or even rippling, they’ll come to a complete stop and refuse to drink. They will wander up and down the stream until they find a still little pool. Then they will drink.

Again, it’s all about the nervous nature of sheep. They are frightened so easily and therefore find it so hard for them to feel safe and secure and be at rest. Interestingly, the Hebrew words that are translated as “beside still waters,” literally reads, “beside waters of rest.”

Again, the psalmist wants us to hear how good it is to be a sheep in the flock of the good shepherd who knows where the ‘water of rest’ is, and that He leads His sheep to drink until their thirst is quenched.

As we can imagine, the places were ‘green pastures’ and ‘still waters’ are both found together are rare. But our Lord knows where these places are and He leads His people to them. And when His people who know His voice hear Him say, “take and eat…” “take and drink…” we know that we shall lack nothing for we have all that we need.

How good it is to be a sheep in the flock of the Lord. “The Lord is my shepherd, I shall not want. He makes me lie down in green pastures. He leads me beside still waters.”