Posted on June 24, 2019 by Lutheran Church of the Resurrection 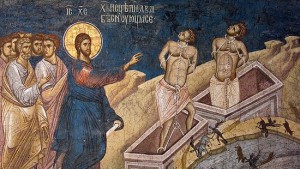 I don’t know about you, but sometimes I think that “the world has gone crazy.” And I know that every generation since Noah has said the same thing – ‘how much worse can it get?’ And I know that every ‘next generation’ seems to take that as a challenge. And yesterday’s insanity becomes today’s normal at quicker and quicker rate and the typhoon seems to spin faster and sucks more poor souls into it and where will it end? And when will it end?

When will God finally say ‘ENOUGH’ and turn His back and walk away and leave us without hope? Because I were God, that’s what I’d do. But thankfully, “my thoughts are not your thoughts, neither are your ways my ways, declares the LORD. For as the heavens are higher than the earth, so are my ways higher than your ways and my thoughts than your thoughts.” (Is. 55:8-9)

And so it is that today we find God, not washing His hands in disgust with our insanity, but chartering a boat to sail right into the insanity. “Then they sailed to the country of the Gerasenes, which is opposite Galilee.”

The ‘Garasenes’ are ‘opposite’ Galilee geographically. But even more ‘opposite’ Galilee religiously. In Galilee, the people are “God’s people,” which doesn’t mean that they’re perfect or without sin, but at least they have God’s Word. And there’s a remnant there who, “hearing the Word of God, hold it fast in an honest and good heart and bear fruit with patience.” (Lk. 8:15). Which means that the devil has to dress in sheep’s clothing to do his dirty work.

But ‘OPPOSITE GALILEE’ such is not the case. God’s Word has either never been sowed or none fell on good soil. So the devil is free to work in the open without disguise and his demons possess whom they will and all the “guards and chains and shackles” are like a spider’s web to a freight train.

So, the “GERASENES” is the last place you’d expect Jesus to want to go. It’s not safe. “Why waste your time, Jesus?” But as I said, “’your ways are not my ways,’ says the Lord.”

He is fulfilling the word of the prophet Isaiah, “I was kready to be sought by those who did not ask for me; I was ready to be found by those who did not seek me. I said, “Here I am, here I am,” to a nation that was not called by my name. I spread out my hands all the day to a rebellious people, who walk in a way that is not good, following their own devices… who sit in tombs, and spend the night in secret places…who say, “Keep to yourself, do not come near me, for I am too holy for you.” (Is. 65:1-5)

“When Jesus stepped out on land, there met him a man from the city who had demons. For a long time he had worn no clothes and he had not lived in a house but among the tombs.” The man is ‘insane.’

And Luke tells the cause of his insanity. HE HAD DEMONS. All the counseling in the world isn’t going to help this man, because the demons had POSSESSED this man and the man couldn’t shake them. The way we say it is, “the man had demons.” But what we really mean is, “the demons had this man.” He was POSSESSED.

What happens next is a bit tricky to navigate. “When he saw Jesus, he cried out and fell down before him and said with a loud voice, ‘What have you to do with me, Jesus, Son of the Most High God?’ I beg you, do not torment me.”

It’s not completely clear who’s speaking here. Is it the demon or the man?

If it’s the demon who is speaking, “What have you to do with me?” the answer is, “I have come to destroy you and cast you into the abyss, where I myself will shortly descend to announce to you WITH A LOUD VOICE, that I have crushed your master’s head, and you shall suffer eternally for all of the suffering you have inflicted.

The point is, JESUS DOESN’T GIVE SANCTUARY OR NEGOTIATE WITH DEMONS.
But if it’s the man who asks, “what have you to do with me, Jesus, Son of the Most High God? I beg you do not torment me,” the answer is, “I have not come to TORMENT YOU or to add more chains and shackles to bind you. I have come to deliver you and set you free from your demons and give you your life back. “I have come to proclaim… liberty to the captives… to set at liberty those who are oppressed…” (Luke 4:18)

It is the same for us. Our Lord has come down from heaven and sailed across the baptismal lake to you who were born in chains, bound to the devil and his demons, destined to live forever in the tombs that are there to hold the dead.

Jesus has broken the bonds and opened the prison and set you free. He has made you His own POSSESSION and He now POSSESSES you.

He has given you His NAME to call upon, and His WORD to use when the demons hassle you, AS THEY WILL do throughout your life.

To call upon the NAME OF JESUS, is to borrow His power which is so great that it causes the demons in us to beg that they we sent away from us.

In addition to His NAME, He has given you His Word, that no devil or demon can stand against because it is filled with the very ‘breath of God’ which fills the demons with terror even as it fills you with God’s peace. We should use GOD’S WORD whenever and wherever we under attack from the demons that would possess us, whom our Lord has already taken possession of.

Which of course means that before you can tap into the Word of God, you’ve got to ‘know’ the Word of God. Which is why you receive a weekly bible verse in your e-mail to memorize, that by memorizing it, you can take it with you wherever you go.
As it turns out there was an audience that witnessed everything that happened. The herdsmen whose pigs were now at the bottom of the sea saw it all. And they FLED to the city and told everyone what happened.

“Then people went out to see what had happened, and they came to Jesus and found the man from whom the demons had gone, sitting at the feet of Jesus, clothed and in his right mind, AND THEY WERE AFRAID.”

Imagine their surprise when they found the man SITTING AT THE FEET OF JESUS.
Like a little kitten lapping up pure spiritual milk.
Like Mary, sitting at the feet of Jesus soaking up every word that comes from His mouth.
Like a prisoner serving a life sentence just pardoned and set free.

And IN HIS RIGHT MIND. No longer ‘insane,’ he now ‘sane.’ He knows that this “Jesus, Son of the Most High God” is MY LORD and MY SAVIOR who saw ME while I was still a long way off, even from the OPPOSITE SIDE OF THE SEA, and sailed across it to set ME free from MY demons. He came to bring me out of my graveyard to live with Him in His heaven.” “HE WAS IN HIS RIGHT MIND.”

You want to know who’s crazy? “Then all the people of the surrounding country of the Gerasenes asked [Jesus] to depart from them, for they were seized with great fear.”

The ‘sane’ man, “The man from whom the demons had gone BEGGED that he might BE WITH HIM, but Jesus sent him away, saying, ‘return to your home, and declare how much GOD has done for you.” And he went away, proclaiming throughout the whole city how much JESUS had done for him.”

The account opened with concern for the ‘insane man.’ But now Jesus has turned everything upside down and the last shall be first. ALL THE PEOPLE begged Jesus to DEPART FROM THEM, and this man BEGS Jesus to let him BE WITH HIM. Here is a man who is IN HIS RIGHT MIND even while the rest of the world has gone insane.

And then, one day, just when we think this world just can’t get any worse, our Lord will set sail from the OTHER SIDE and stand upon the earth. And every eye will see Him. And He will command His holy angels to cast every demon into the abyss, and the earth will quake at the sound of the door slamming shut over the abyss, never to be opened again.

And everyone will be in their RIGHT MIND. And everyone and everything will declare how much God has done for us.