Posted on November 4, 2019 by Lutheran Church of the Resurrection 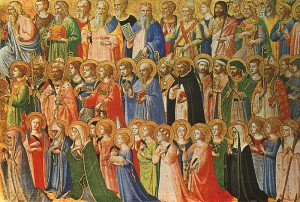 The Festival of All Saints is really the most comprehensive of all of the Festival days on the church’s calendar. It’s the celebration of Easter and the resurrection of those who have not only died with Christ but who have also been raised with Him and are with Him where He sits at the right hand of God in heaven.

All Saints is the celebration of the successful outcome of the Great Commission and Pentecost where the apostolic commission to baptize and teach all nations results in
“great multitude which no one can number” from every nation, race, culture and language.

All Saints also draws us into the 2nd Coming of our Lord and that blessed and everlasting life where bodies are reunited to their souls – and the chaff is separated from the wheat – and all hunger and thirst perfectly satisfied – and the scorching heat of the temptations to sin and the tears which flow from one false hope and broken promise and terrible nightmare to another are over forever and ever – and there is only light and life and hallelujahs – and the “sufferings of this present time are not worth comparing to the glory that shall be revealed in us.” (Romans 8:18).

Today, we give thanks to God for all whom the Holy Spirit gave new life through the gift of faith in Jesus Christ – and were preserved in the one, true faith until they breathed their last. We give thanks to God for bringing these loved ones and friends of ours, and for all the saints, who from their labors rest – in to the perfect rest of eternal life in heaven.

As we sang earlier, today we give thanks to God for “the unsung saints, that countless throng, who kept the faith and passed it on…” (LSB #678) Their names will never be written on the Church’s calendar and except by their families and friends and brothers and sisters in Christ, they’ll will not be remembered for very long. But their names are “written in the book of life of the Lamb who was slain…” (Rev. 13:8). Which is all that really matters.

In a day in which we are being told that the church is shrinking at the seams and that unless it conforms to the culture of the day it’s going to go out of business, John sees what is most real – “A great multitude that no one could number.”

One of the elders asked him, “who are these and where have they come?” When John was with Peter and James and Jesus on the mount of Transfiguration, he was able to identify Moses and Elijah who appeared with Jesus in glory. But these he does not recognize or know who they are.

Some of these whom we have named, we may not know either. But some, we know quite well. These are fathers and mothers, husbands and wives, sons, good friends. Time has passed and the anguish of the grave has faded. Death has lost the sting that it once had. And we give thanks to God for that.

But unlike the vast majority of the world that can only think of the dead as loved ones or friends who are ‘gone,’ the Christian Church has always confessed that those who have died in Christ, are just as ALIVE, and just as much a part of the “one, holy, Christian and apostolic church” as we are.

It was G.K. Chesterton who once said that the Christian Church is the only organization on the planet that does not disenfranchise its members just because they have died. The resurrection of Jesus Christ and His ascension to heaven means that death is now only a flimsy and paper thin veil that stands between us and them.

Which means that the only separating us from them and them from us is ‘sight.’ For we still live by faith in what is ‘unseen,’ while they no longer live by faith, for they “see him as He is.”

But there is only ONE LORD! Which means that they are NO CLOSER to the Lord than we are – and we are NO FURTHER from the Lord than they are.

But still, we long to be where they are and see what they see. And so we strive to remain in this one, true faith until we too breathe our last.

This ‘faith’ that trusts solely in the Word and Promise of our Lord – which cannot fail, spills out over our lips in the way that we speak about those who have died in the faith. We don’t need to pretend that they were perfect people or even ‘worthy’ of eternal life. We’re free to remember and even speak of them as ‘sinful and unclean’ just like we are. They sinned against God and against their neighbors, and maybe even against us, by what they did and by what they didn’t do, just like us.

In fact, no one in heaven boasts of their own goodness and their wonderful qualities. “Crying with a loud voice,” they say, “salvation belongs to our God who sits on the throne, and to the Lamb!”

The point is, it’s not in their goodness that we find our comfort and our joy, but in the forgiveness for all of their sins; that all of their ‘filthy rags’ have been “washed… and made white in the blood of the Lamb,” just like ours have.

We wear the same “white robes” as they do because we were baptized with the same baptism as they were, in which all of our filthy rags were washed and made white the blood of the One, Lamb of God. But again, John sees the ‘white robes’ they are wearing, whereas we do not see ours, but must believe that we do solely on the basis of God’s Word to us.

And so we wonder if the reason that this heavenly multitude “cry out with a loud voice” might not, at least in part, be due to the utterly shocking realization that they had been wearing these white robes ever since they were born again in the holy water but either doubted it or altogether forgot it.

But now in heaven, they not only see God as HE IS, but now they see themselves as they are – renewed and redeemed in the image of God, holy and righteous in His sight – a truth that they always struggled to believe as long as they were alive in this world where sin is still present in everything. But “Now they know fully what they had only known in part.” (1Cor.13:12).

In addition to the white robes that they wear, they are also holding palm branches in their hands. In his gospel, John writes what he saw on that day that this Jesus road the donkey into Jerusalem. “So they took branches of palm trees and went out to meet him.”

There, on the day we now call “Palm Sunday,” Jesus came to set His Church free from the grip of death and hell by His cross. They had chosen Him to be their Passover Lamb, that by His blood, death would pass over them. Waiving palm branches and singing songs of praise, they were “crying out ‘Hosanna! Blessed is he who comes in the name of the Lord.” (John 12:13).

Now, standing before the throne of God in heaven, the same Christian Church waives their palm branches in thanks and praise to the One who has come in the name of the Lord, and has delivered them out of this GREAT TRIBULATION into His eternal glory.

There is an old custom that has gone out of use in which a palm branch was placed into the hand of the deceased in the coffin as a vivid reminder to the living that this one died in the Christian faith and is already one of the “great multitude that no one could number.”

The prophet Isaiah once found himself before the throne of God. And in the presence of the holy, holy, holy God, he was terrifyingly aware of his sin, particularly, his unclean lips. And the angel seared Isaiah’s lips with a coal from the altar and said, “See your guilt has been taken away and your sin has been atoned for.”

But now every unclean lip has been sanitized by that which comes from the altar – hot coals for Isaiah – bread and wine for you and me. And so we join our voices with theirs, and with the ‘angels and archangels and all the company of heaven, we laud and magnify’ His glorious name as one, holy, Christian church that we all are – all together, from every time and from every place, declaring the great “Amen” to all that God has done for us by the cross of Christ and His empty tomb.

Today and every day, as we join our voices to theirs, we do so with the assurance of faith that our names have also been written in THE BOOK OF LIFE and that the day will come when we too will be called out of this great tribulation and the Church Militant and into the Church Triumphant in heaven.

“And everyone who thus hopes in Him, purifies himself as He is pure.”