Posted on May 21, 2018 by Lutheran Church of the Resurrection

“When the Day of Pentecost arrived, they were all together in one place.” 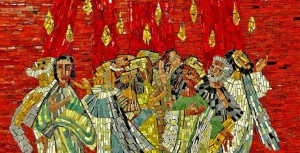 It may surprise you to learn that the Day of Pentecost has been on the Church’s calendar a lot longer than Easter or Christmas. The Festival of Pentecost was established in the Old Testament, when Israel was in the desert making its way to the Promised Land. God told Moses to tell that people that the Promised Land would “flow with milk and honey.” Every day would be an ‘all you can eat and drink’ buffet. And not one of those $7.99 ‘all you can eat’ buffets. It’d be “the choices meat and the finest wines” all the time. And it would all be FOR FREE.

The Day of Pentecost is the annual day to celebrate and give thanks for the harvest. Initially, it was called the “Feast of Weeks.” From the day that the first grain was cut, they were to count a ‘week of weeks,’ seven weeks – 49 days. That’s the time it would take to bring in the harvest.

The day after the ‘week of weeks,’ ON THE 50th DAY from when the harvest began, they were to bring baskets of grain to the temple as a ‘thank offering’ to God for the bountiful harvest. “Pentecost” literally means “50th.” It’s the “50th day” after the “FIRST FRUITS” of the harvest was cut.

The Day of Pentecost was something like our “Thanksgiving Day” only without the football and ‘Black Friday.’

50 days before the Day of Pentecost was Easter Sunday – the day that Jesus Christ rose from the dead – “the first-fruits of those who have fallen asleep.” The holy seed that was sown in womb of the virgin Mary has produced His crop of Christians, and what a crop it is.

The harvest began with the Apostles on Easter Day. Jesus walked right through the locked door of the Upper Room and said, “’Peace be with you.’ And when He had said this, He breathed on them, and said to them, ‘Receive the Holy Spirit.’” (John 20:21f). That was His LITTLE PENTECOST.

50 days later, the Crucified, Risen and now Ascended Lord bends down from the right hand of God the Father and breathed His holy breath on them again. This is His BIG PENTECOST. This is the one that John the Baptist pointed to when he said, “I baptize you with water for repentance… He will baptize you with the Holy Spirit and with fire…” (Matthew 3:11)

While He was still with them, He had promised, “When the Spirit of truth comes.. whatever He hears He will SPEAK… He will take what is mine and DECLARE it to you.” (John 16:13-14).

Now, filled with the HOLY SPEECH breathed into them, they begin to SPEAK – just as the prophet Joel had promised, “in those days I will pour out my spirit, and they shall PROPHESY.” (Acts 2:18).

And what ‘speaking’ it was. We’d probably appreciate this more if we lived in Boston or New York City where there are so many different languages. Everyone could understand exactly what was being said. Not because they could interpret foreign languages but “because each one was hearing them speak in his own language.”

This is the ‘harvest’ that Jesus saw when He said, “The harvest is plentiful…”

Sometime later, the same Holy Spirit would carry the apostle John away and show him what the Day of Pentecost looked like from the heavenly perspective. “After this I looked, and behold, a great multitude that no one could number, from every nation, from all tribes and peoples and languages, standing before the throne and before the Lamb…” (Rev. 7:9)

Much earlier, the same Holy Spirit had carried the prophet Ezekiel away and showed the Day of Pentecost looked like from the heavenly perspective as well. “The hand of the LORD was upon me, and he brought me out in the Spirit of the LORD and set me down in the middle of the valley; it was full of bones. And he led me around among them, and behold, there were very many on the surface of the valley, and behold, they were very dry.”

This looks more like the kind of harvest that we’re familiar with. Bone dry, thirsty, parched lives. The kind of dried out life the psalmist was talking about when he said, “my tongue sticks to the roof of my mouth.” A mouth full of sand and not enough saliva to spit it out. Dry mouth – can’t speak. Dry eyes – can’t see. Dry bones – can’t stand upright. “My strength is dried up like a piece of broken pottery.” (Ps.22:15). Exhausted, weary, worn out.

It’s horrifying to see how many dry-bone skeletons were lying in that valley. And I bet if you were to scan the DNA of those bones, you’d find a match to your own. They cut themselves off from the ‘true vine’ either by refusing or ignoring His holy Word – it’s the same result either way. They exchanged the ‘truth’ for a ‘lie.’

And now they’re worn out from chasing every slimy promise and gimmick that guaranteed to make them happy and accepted and successful – but didn’t. They’re exhausted from trying to keep up with all the other skeletons in the valley. “Behold, they say, ‘Our bones are dried up, and our hope is lost; we are indeed cut off.’”

The Spirit of the Lord, the same “Spirit of the Lord” that blew His holy breath on the holy apostles on the Day of Pentecost in Jerusalem, now blows on these dry bones through His holy prophet in the desert. “Prophesy over these bones and say to them, ‘O dry bones, hear the word of the Lord.”

“Thus says the Lord, ‘Behold, I will open your graves and raise you from your graves, O my people… And I will put my Spirit within you, and you shall live. Then you shall know that I am the Lord; I have spoken, and I will do it, declares the Lord.”

And as the Spirit of the Lord breathed Himself out onto this ‘valley of dry bones’ through the preaching of His prophet, “behold, there was a sound and behold a rattling, and the bones came together bone to its bone. And I looked, and behold, there was sinews on them, and flesh had come upon them, and skin had covered them…. Come, from the four winds, O breath, and breathe on these slain, that they may live…. And the breath came into them, and they lived and stood on their feet, an exceedingly great army.” WHAT A HARVEST!

This too is the ‘harvest’ that Jesus saw when He said, “The harvest is plentiful…”

The Holy Spirit is poured out on the Apostles and Peter PROPHESIED, and 3,000 dead in their sins came to life. 3000 baptized into the name of the Father and of the Son and of the Holy Spirit – forgiven all of their sins – raised from the dead. 3000 returning to their homes, rejuvenated, hopeful, alive, each SPEAKING in their own native language, telling their children and neighbors and co-workers and whoever will listen the Good News.

It was like a field of ripe dandelions. When the wind blew on them, all the seeds blew off and landed and took root and spouted and grew into a whole new crop of breathing, walking, LIVING children of God. What a harvest.

All of this, just as Jesus promised. “When the Helper comes, whom I will send to you from the Father, the Spirit of truth, who proceeds from the Father, he will bear witness about me.” (Jn. 15:26).

So, dry bones, hear the Word of the Lord. The Holy Spirit testifies to you about Jesus Christ –whose tongue stuck to the roof of his mouth. Whose strength was dried up like a piece of broken pottery, who cried out, “I thirst” as He hung from the cross He has taken your sinews and flesh and bones onto Himself. He has made your confession His own – ‘whose bones are dried up, whose hope is lost; who is indeed cut off.’ ‘My God, my God, why have you forsaken me?’

By His cross and for His sake, the Holy Spirit TODAY SPEAKS to us saying, ‘Hear the Word of the Lord,” your hope is not lost. You are not indeed cut off. Christ Jesus Himself has been ‘breathed into you.’ In Him, you are very much alive.

“And it shall come to pass that everyone who calls on the name of the Lord shall be saved.” You are the ‘harvest’ that Jesus saw when He said, “The harvest is plentiful…”

A blessed Day of Pentecost to you all.