Posted on February 5, 2012 by Lutheran Church of the Resurrection

Click play to listen to the audio version of this sermon.
[audio:sermon-2-5-12.mp3]

It is the blessed hope of heaven that shapes our life of faith here in this world. We cheerfully endure the loss of everything that this world has to give, possessions, spouses, children, friends, honor, fame, health, even life itself, because we know that our destiny far outweighs it all.

And just to be sure we understand this fully, because I think most of us have a pretty shallow understanding of ‘the Christian hope,’ our hope is not just for a peaceful death in faith and the eternal life of the soul in heaven. Our hope is so much more than that. Our hope goes way beyond our death and the death of loved ones who have died, and the death of future generations who will die.

We are awaiting the return of our Lord, Jesus Christ, in all His glory, on the last day, and the resurrection of our physical body, united with our soul, when we will finally be human as God made human to be and live life as God made life to be lived.

And with joy beyond knowing, and peace the likes of which this world hasn’t a clue, and love that will break your heart for the joy of it, with angels, archangels and all the company of heaven, basking in the unveiled presence of God who sits on the throne and the Lamb who was slain, where there is no death but only eternal and imperishable life, no sin, but only pure righteousness and holy innocence, no fear or sorrow or crying, only perfect security and total contentment, where God is everything and His glory is everywhere and we are so caught up in it all that its all that we know.

This is the life that Christ our Lord has won for us by His blood and cross and death and resurrection. This is the purpose for which the Father sent His Son into the world. This is the destiny that the Holy Spirit has made ours in our Baptism.

I know that the answer seems pretty obvious, but don’t kid yourself. We’re all infected with a very strange disease that makes us act like crazy people and we ignore the ‘glory of God’ and strive for the ‘glory of man’ as though it was everything and all that mattered. Or as though we could have both.

The Christian hope “is correctly taught, but not easily learned; rightly preached but not easily followed; well said, but poorly practiced.” (Luther) If we were honest with ourselves, with the honesty that we confessed a few minutes ago, we would have to admit that we seldom think of our eternal life. When was the last time that the thought of your eternal destiny in heaven crossed your mind? Yet shouldn’t this be the ever-present, driving force in our heart and mind that sets the course for all that we do and don’t do, and the way we raise our children and the way that we treat one another and PREACH THE GOSPEL? 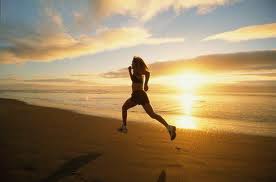 Paul writes, (and I’m going to translate some of this myself) “do you not know that in a stadium all the runners run, but only one receives the prize? Run to seize it.”
There was a huge athletic stadium in Corinth that hosted the famous Isthmian Games every four years the year before the Olympic games. Paul was in Corinth planting this congregation from 50 – 52AD. The Isthmian games were held in 51AD, so he would have witnessed them. Paul writes this letter to the Corinthians in 55 AD, the year the games were in Corinth again. Two of the contests that were a part of the games were the foot races and the boxing matches.

Your eternal destiny is the prize that is set before you. Run like those runners to seize it. RUN, as in, Mary Magdalene RAN from the tomb to tell the disciples that the stone had been rolled away. (Jn.20:2). RUN, as in, Peter and John RAN to the tomb and John outran Peter.

Writing to the Corinthians, Paul sounds like a cheerleader. But when Paul writes to the Galatians he sounds like a track coach after a disappointing meet. “You were running so well. Who hindered you?” (Gal.5:7). Who got in your way, what slowed you down, what distracted you from the goal? Don’t let that happen. Pray without ceasing, hear the Word and mediate on it. You’ve got to eat and drink the Lord’s Supper to keep up your strength.

Run to seize THE PRIZE which is your eternal life. Don’t run to take hold of what dies and that thieves break in and steal and moth and rust destroy. Let go if it! “Take hold of that which is truly life.” “I press on toward the goal for the prize of the upward call of God in Christ Jesus.” (Philip. 3:14)

To SEIZE is to take what belongs to you. Peter and Andrew brought Jesus home where Peter’s mother-in-law was sick in bed with a fever. Jesus “seized her by the hand and raised her up.” He was her Lord and He was taking hold of what belonged to Him. The prize belongs to you because you belong to Jesus and He has seized you from death and the devil that you may have the prize. “Take hold of the eternal life to which you were called.” (1 Tim. 6:12,19).

II. Athlete. Self Control.
“Every athlete exercises self-control in all things.”
I know that some of you are athletes so you know what it takes to get ready for a meet or competition or recital. It requires ‘self-discipline,’ up early for practice, up late for practice, watching what you eat and drink, saying ‘yes I will’ when your body is screaming at you ‘please no more.’

The word for ‘athlete’ in the New Testament is “agonidzo.” An athlete is someone who is familiar with ‘agony.’ ‘Agony’ as in, “And being in AGONY he prayed more earnestly, and his sweat became like great drops of blood falling down to the ground.” (John 22:44). What an athlete He was. What self-control in all things He had. He was running to seize the prize. And the prize was you.

III. Crown.
Do you know what the prize that athletes competed for in the Isthmian games? It was a crown made out of either pine branches or wilted celery stalks. I’m not making this up. No trophies or long-term contracts or endorsement deals, but wilted celery stalks. This is what they “agonized” for.

“They do all of this to receive a crown that rots. But you, for an imperishable crown.”
Think about how hard we run and work and compete for that which rots. And think about some of the stuff that is rotting and corrupted because we don’t run and work hard enough, because we have so little self-control. If they go at it as hard as they do for what rots, how much more shall we for what is imperishable?

The Roman historian, Tacitus, who was no friend of the Christians, writes, “Nero punished a race of men who were hated for their evil practices. These men were called Christians. He got a number of people to confess. On their evidence a number of Christians were convicted and put to death with dreadful cruelty. Some were covered with the skins of wild beasts and left to be eaten by dogs. Others were nailed to the cross. Many were burned alive and set on fire to serve as torches at night.”

The Bishop of Jerusalem, James the brother of Jesus, writes to the Church, “Blessed is the man who remains steadfast under trial, for when he has stood the test he will receive THE CROWN OF LIFE, which God has promised to those who love him.” (James 1:12). Let your eternal destiny direct the course of your life in this world. Seize the crown of life.

In his Revelation, St. John, who lives during this time of great persecution, records the words of Jesus to the Churches, “Do not fear what you are about to suffer. Behold, the devil is about to throw some of you into prison, that you may be tested, and for ten days you will have tribulation. Be faithful unto death, and I WILL GIVE YOU THE CROWN OF LIFE … I am coming soon. Hold fast what you have, so that no one may SEIZE YOUR CROWN.” (Rev. 2:10; 3:11)

This is the same Jesus who was suffered all, and was FAITHFUL UNTO DEATH and who received A CROWN OF THORNS – so that you may receive a crown of life.

IV. Certainty. Black eye.
“So I do not run uncertain of where I’m going; and I do not box as though I was thrashing the air. But I give my body a black eye and I treat it as my slave, lest after doing all this preaching, I myself should be disqualified.”

Jesus told a parable about a judge who neither feared God nor respected man. A poor widow in his jurisdiction came to him seeking justice. SHE CAME TO SEIZE WHAT BELONGED TO HER. But the judge wouldn’t listen and told her to go away, but she kept coming back, until finally the judge said, “I will give her justice so that she will not “GIVE ME A BLACK EYE.” (Luke 18:22).

Listen, you know what belongs to you and is yours by right of your baptism. Be certain of where you are going and don’t be misled or deceived. Follow Jesus. He was not confused or uncertain of where He was going. St. Luke writes, “When the days drew near for Jesus to be taken up, he set his face to go to Jerusalem.” (Luke 9:51).

Resist the temptations of the flesh. Do not let your body tell you what to do and make you its slave. Follow Jesus. He was the master of His body even as He was flogged and crucified on the cross and as His body screamed at Him to surrender the cause. “Fix your eyes on Jesus, the founder and perfecter of our faith, who for the joy that was set before him endured the cross, despising the shame, and is seated at the right hand of the throne of God.” (Hebrews 12:2)

“FOR THE JOY THAT WAS SET BEFORE HIM ENDURED THE CROSS.” As in, “take you your cross and follow me.” The way to our destiny is the way of the cross. Our prize hangs from that cross. Run, to seize the prize that is yours. Seize and eat, the body of Christ given for you. Seize and drink, the blood of Christ shed for you.
run, but only one receives the prize? Run to seize it.”