Posted on March 27, 2016 by Lutheran Church of the Resurrection

We begin where we left off on Good Friday. Luke zooms in on the cross and focuses our attention on the One hanging from it. “’Father, into your hands I commend my spirit.’ And He breathed His last.” 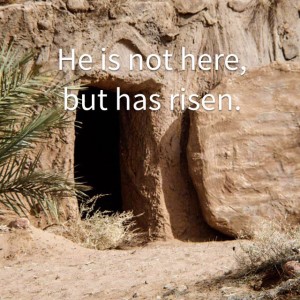 Luke then widens the view and we see a Roman centurion who is also there. He’s the one in charge of carrying out this execution. He reacts very STRANGELY to His death by “praising God” and making an even stranger confession, “Certainly, this man was innocent.”

And then the lens widens ever farther and we see “all the crowds that had assembled for this spectacle…” Seems that people were as sick then as they are now and they enjoyed watching other men suffer and die in this most painful and tortuous way. And then Luke shows us that even they, who were simply spectators, “returned home beating their breasts.”

And then the lens widens even farther and we see “all of His acquaintances…standing at a distance, watching these things.” Not for the spectacle, but as friends and loved ones gathered around the bedside of a dying brother and dear friend.

And there were also “the women who had followed him from Galilee.” These were the ‘deaconesses’ doing their diaconal mercy work for Jesus and His disciples long before there was a uniform or badge to wear for it… standing at a distance, watching these things, no doubt already thinking about the funeral arrangements that will need to be made.

After a brief time lapse, not sure how long, but certainly no more than a couple of hours, Luke has the camera focused on the cross again. A man named Joseph is taking the body down and wrapping it in a linen burial cloth and taking it to a tomb he had purchased for himself. Luke gives us what seems like a trivial little detail about this tomb. “…where no one had ever yet been laid.” It was, if you will, a VIRGIN TOMB.

The camera lens now widens just enough to reveal the fact that there are others who are also there. It’s “the women who had come with him from Galilee…” They “followed and saw the tomb and how his body was laid.” The location of the tomb, the position of the body, the way it was wrapped in that linen cloth.

“And then they returned…” Luke doesn’t tell us WHERE they returned to. It’s a slow fade out as they disappear over the horizon.

Where ever it was that they returned to, it couldn’t have been too far, because before the sun is completely set on that Good Friday and no more work can be done, they have already “prepared spices and ointments” to pack around His dead body which was the reverent and deaconess thing to do.

And now the screen is totally dark. And Luke tells us, “on the Sabbath, they rested according to the commandment.” And you’re free to picture that however you will. But I for one can only picture it as lying there with minds racing from one scene to the next, eyes wide open, so filled with tears that sleep was out of the question.

If they derived any comfort or consolation from their faith, it was that they believed in the resurrection from the dead. You heard me. Belief in the resurrection from the dead was a vital ‘article’ of the Jewish faith. The party of the Sadducees didn’t believe it, but the party of the Pharisees and Scribes, who represented the vast majority of Jews, surely did. They believed in a resurrection of the dead ‘ON THE LAST DAY’ when the Messiah would comes. He will raise the faithful from their graves and bring them into His NEW CREATION.

And if you listen carefully, you can hear the faithful find their comfort and consolation in their suffering and grief and suffering in exactly this article of faith.

One of oldest books in the Old Testament is Job. In his great suffering and pain, Job declares “I know that my Redeemer lives, and at the last he will stand upon the earth. And after my skin has been thus destroyed, yet in my flesh I shall see God.” (Job 19:24-25). Job believed in the resurrection of the dead on the last day.

The prophet Daniel writes about the end of time when “many of those who sleep in the dust of the earth shall awake, some to everlasting life and some to shame and everlasting contempt.” (Dan.12:2). Daniel believed in the resurrection of the dead.

And then of course, there’s that memorable scene from John’s gospel when Jesus comes to the tomb of His friend Lazarus who has died, and tries to comfort Lazarus’ grieving sister, Martha. “Your brother will rise again.” And how does Martha reply?
 ‘Resurrection from the dead? I’ve never heard of such a thing.’ No.
 ‘Resurrection from the dead? Don’t expect me to believe in that MYTH that was invented to comfort people who need to believe in something, even if it is just a myth?’ No.
 ‘Rise again? No Jesus, when you’re dead you’re dead. That’s all there is.’ No.

And then He asks Martha the critical question, “Do you believe this?” And Martha said, “Yes Lord; I believe that you are the Christ, the son of God, who is coming into the world.” (John 11:24-27) How close to the truth dear Martha was.

So, sure the women believed in the resurrection of the dead when the Messiah comes on the last day – as did the disciples. But what they weren’t expecting or prepared for was that the last day HAD COME. And now a NEW DAY has dawned that is both the 1st day of the week and the 8th day that begins a whole NEW TIME that is BEYOND TIME.

This Jesus, whom everyone said was a ‘prophet,’ is more than a prophet. His is the Christ, the Messiah, in whom THE PROMISE OF THE RESURRECTION FROM THE DEAD HAS BEEN CARRIED OUT, and in whom the NEW CREATION has begun. A NEW CREATION that for a while, exists simultaneous with the OLD. It is PRESENT but still FUTURE. It is NOW but NOT YET. And it is all wrapped up in Jesus Christ.

If you’re old enough to remember the old T.V.’s, remember how when you shut it off that little, white dot got smaller and smaller until it was finally gone. As Luke tells it, no sooner does that little dot of light disappears than the screen comes back to life and it’s “the first day of the week, at EARLY DAWN.” Only the smallest dot of light coming over the most distant horizon and the woman are already up and out the door, making their way back to the tomb “TAKING THE SPICES THEY HAD PREPARED.”

Luke tells us nothing of their journey or the conversation along the way as some of the other gospelers do. No time for any of that. Luke just wants to get there. “And they FOUND the stone rolled away from the tomb, but when they went in, they did NOT FIND the body of the Lord Jesus.” It’s what they DID NOT FIND that will prove to be THE GREATEST DISCOVERY IN THE WORLD.

But they’re still not ready to celebrate. Luke writes, “they were PERPLEXED.” It’s a fascinating word in the Greek. “aporeo.” It comes from the word, “poreo” which is a common word in the New Testament that means, “to set out,” “to depart,” “to go,” like when you “set out” on a journey or go somewhere. When you put that little ‘a’ in front of it, it makes it negative. “aporeo” – they couldn’t MAKE THE JOURNEY in their minds TO GO FROM what they are seeing to UNDERSTANDING what they are seeing. They were at a complete loss. “They were PERPLEXED.”

And maybe you know exactly what that word means. Maybe you have been PERPLEXED too – totally unable to process the events that have happened, at an utter loss as to how to SET OUT or MORE FORWARD with your life. I think we have all been there at one time or another.

But if there is one thing in this world that you should NOT BE PERPLEXED about, IT’S WHY THIS TOMB IS EMPTY. You can be PERPLEXED about a lot of things – but not this.

But there are some things that we are not able to understand on our own. The mystery is too deep. The wonder is too high. We have no EXPERIENCE to relate this to. And that’s where angels tend to show up, just as they did to Mary and Joseph and the Shepherds.

And that’s what happens here at the tomb. “And behold, two men stood by them in dazzling apparel.” But in almost every place where angels show up, their first words are, “Fear not!” “Do not be afraid.” But they don’t say that here. And so Luke writes, the women “were frightened and bowed their faces to the ground.” Now these poor women were PERPLEXED and FRIGHTENED.

And the way Luke describes it, it’s almost as though the two angels are PERPLEXED as to why these women are PERPLEXED. “WHY DO YOU SEEK THE LIVING AMONG THE DEAD? HE IS NOT HERE, BUT HAS RISEN.” CHRIST IS RISEN! “He is risen indeed – alleluia.”

And then these angels give these women the remedy for their PERPLEXITY – and yours too. REMEMBER.

“Remember what He told you, while he was still in Galilee, that the Son of Man must be delivered into the hands of sinful men and be CRUCIFIED AND ON THE THIRD DAY – ARISE.”

It’s His resurrection from the dead that confirms that His Word is true and worthy of our trust and our obedience. Easter is the Father’s stamp of approval on all that His Son has said and done.

The Father has sent His beloved Son into the world through a VIRGIN WOMB to bear the sin of the world in His body and atone for it completely. And then He raised His crucified Son from a VIRGIN TOMB, that the whole world may know that “WITH HIM HE IS WELL PLEASED” and through Him, a new day has dawned and the NEW CREATION has begun.

Luke writes, “AND THEY REMEMBERED HIS WORDS…” And in remembering His Words, they go from ‘UTTER LOSS’ to ‘WONDERFUL DISCOVERY,’ from ‘FEAR AND FACES TO THE GROUND’ to RELIEF AND JOY, ready to go; ready to set out on a journey. “And returning from the tomb they told all these things to the eleven and to all the rest.”

But it’s not angels that come to us to remind us of what He said. It is the crucified and risen Lord Jesus Christ Himself who comes to us in person. “Take, eat – this is my body. Take and drink – this is my blood. Do this in REMEMBRANCE OF ME.”

And as we eat His body and drink His blood, REMEMBERING His words we too go from ‘UTTER LOSS’ to life in the NEW CREATION – that is so good, that “the former things will not be remembered or come to mind.”

‘Christ is risen.’ “He is risen indeed. Alleluia”.