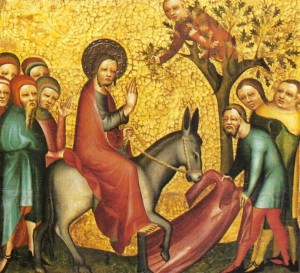 A borrowed donkey. Crowds of spectators and enthusiastic supporters lining the roadside. In their enthusiasm, surrendering their cloaks to the road to cushion his ride. Banners made of palm branches waiving. Loud singing a familiar hymn – “Blessed is He who comes in the name of the Lord. Hosanna in the highest.”

THIS IS PALM SUNDAY.

Palm Sunday has all the thrill and excitement of a triumphant, victory parade such as Roman citizens were used to throwing for their conquering Caesar upon his return from a successful military campaign. This is what the enthusiastic crowd of supporters thought this was all about – hoped that this was all about.

BUT THIS IS NOT WHAT THIS IS.

We all want someone to ride into town and be our conquering hero. We’re ready whatever candidate we think can demonstrate that he’s got what it takes to do what we think ought to be done to make THIS WORLD a better place. Alright, THIS NATION a better nation. Alright, MY LIFE a better life.

They all thought Jesus was their man. Well, NOT ALL. The ‘establishment’ was in the crowd too. We’re not sure why they were there really. Maybe they were just making the daily commute into the city and got caught in the traffic. But you can bet they weren’t waiving their banners and you can really bet that they still had their cloak on. They were pretty disgusted with the whole thing. “Teacher, rebuke your disciples.”

But the rest thought Jesus was their man. They had either seen the incredible things He had done or had heard about them. He healed the sick and gave sight to the blind and cast out demons. He even raised the dead. Or at least that’s what I heard. We could use a king like that.

“The whole multitude of his disciples began to rejoice and praise God with a loud voice for all the mighty works they had seen, saying, ‘Blessed is the King who comes in the name of the Lord!’” It’s all pretty heady stuff.

What we’ve been doing, of course, is describing Palm Sunday from the viewpoint of the crowds. This is the way a reporter would have described it. “An incredible turnout of support and the crowds are really fired up. It’s obvious that this guy has the backing of the people. Now back to you, Matthew.”

But if we were to look at this from ANOTHER VIEWPOINT, the viewpoint of the One on the donkey, it would look and sound altogether different, wouldn’t it?
 Four days until one of His inner circle betrays Him.
 Five until He is the lowest servant and washes their feet.
 Six days until He is arrested, mocked, spit on, flogged to the bone, and crucified.

And He knows all of this as sees the exuberance of the crowds, and hears their singing. But for Him, Palm Sunday is not so much a victory parade as it is a death march.

THIS IS PALM SUNDAY.

Every visit that Jesus had made to Jerusalem before was always with this visit in mind.

When He was just 40 days old, His parents carried Him in their arms to the city and to the Temple to present Him to the Lord according to the Law of Moses. (How strange is that? They presented the LORD to the LORD). And a man named Simeon took Him in his arms and said his ‘nunc dimittis’ – “Lord, now you are letting your servant depart in peace according to your word; for my eyes have seen your salvation…” (Lk. 2)

He had come to the city with His parents for the Passover every year while He was a child. And when He was only 12 years old the Rabbi’s were amazed at His wisdom.

He celebrated the Passover in Jerusalem every year with His disciples over the traditional Seder meal that was filled with singing and joy and laughter and always the eating of a lamb and unleavened bread and drinking cups of wine.

There’s lot’s a happy memories for Him in Jerusalem. Lot’s of good times there.

So why, as He comes around a bend in the road and a view of the city suddenly opens, does He break down in tears of sorrow and sadness?

BECAUSE THEY DON’T GET IT. They thought is was all about power and politics and economics and military strength and ‘adjusted gross income’, and religion, and … well, you fill in the blank. What do you think the future depends on?

They didn’t get that the things that makes for peace ARE NOT ‘THINGS’, but a person. Jesus Christ is your peace. “Peace I leave with you. My peace I give you. NOT AS THE WORLD GIVES DO I GIVE TO YOU.” (John 14:27).

But they only thought about peace the way the world promises to give it – if we just get the right politics, the right economics, the military strategy, the right religion, the right… you fill in the blank. But it’s never RIGHT.

Longing for peace – but never finding it, never having it – even as the PRINCE OF PEACE is right there, and they are cheering Him on. But they don’t get it.

He will not meet their expectations. He will disappoint them – and deeply so. He will prove Himself to be so weak and naïve – pathetic really.

Ah, but now we’ve switched back to the viewpoint of the crowd again. This is the way it all appeared to them.

But if we will see this from His viewpoint, we see it altogether differently. He comes to give His peace to all who will have HIS PEACE – which is the only REAL peace there is. But He comes to give you peace – not as the world gives it – but as He gives it.

And His ways for PEACE are foolish and weak and require self-denial and sacrifice and suffering and even death – even death on a cross.

But we didn’t listen to Him did we? We only heard what we wanted to hear. And we didn’t believe Him or trust Him at His word, did we?
 “Fear not, for I am with you” – ‘but you don’t understand.’
 “Do not worry” – ‘that’s easy for you to say.’
 “Trust in God, trust also in me…” – “You’re asking too much Jesus.”

We only believe Him insofar as we agree with Him and trust Him insofar as it is convenient for us.

And now there is something that stands like a between us and His peace. And that something is our sin.

And this is what Jesus is riding into Jerusalem to do. He atones for them all by taking them all upon Himself and suffering the punishment that they deserve – in full.

This is Palm Sunday. Jesus rides into Jerusalem to die. He rides on to go to the cross and bear the awful load that only He can bear.

This entire REASON that He came into the world is the entire REASON He is riding into Jerusalem. It is the Father’s will that the Son should bear the sins of the world and atone for them and reconcile all things in heaven and on earth through His body of flesh – “in order to present you holy and blameless and above reproach before Him.” (Col 1:22).

Palm Sunday is a death march that proceeds from the village of Bethany into Jerusalem and from Jerusalem through time and into this very place today. Today, Jesus rides into this sanctuary on the donkey of His Word preached and His Sacraments administered.

He rides to us on His Word, and speaks His peace into our ears that by hearing we may GET IT. PEACE BE WITH YOU!

He rides to us this morning on the bread and wine and puts His body in our hands and His blood onto our lips, that by eating and drinking we may GET IT. THE PEACE OF THE LORD BE WITH YOU ALWAYS.

THIS IS PALM SUNDAY. It’s a death march. BUT IT’S NOT A DEATH MARCH THAT ENDS IN DEATH. It is a march that goes through death and ends with LIFE.

And so there is yet another viewpoint that we must see all of this from and it is the view from heaven. Would you take your bible and go to Revelation 19:11-16 – page 1040.

“Then I saw heaven opened, and behold, a white horse! The one sitting on it is called Faithful and True, and in righteousness he judges and makes war. 12 His eyes are like a flame of fire, and on his head are many diadems, and he has a name written that no one knows but himself. 13 He is clothed in a robe dipped in blood, and the name by which he is called is The Word of God. 14 And the armies of heaven, arrayed in fine linen, white and pure, were following him on white horses. 15 From his mouth comes a sharp sword with which to strike down the nations, and he will rule them with a rod of iron. He will tread the winepress of the fury of the wrath of God the Almighty. 16 On his robe and on his thigh he has a name written, King of kings and Lord of lords.”

The day is surely coming when we will see Palm Sunday in from no other viewpoint than this – AND WE WILL GET IT. Fully, completely, perfectly.

But until then, in joyful EXPECTATION of the victory that lies on the other side of death, EVEN NOW, we are bold EVEN NOW, to join our voices with the angels and archangels and all the company of heaven, singing, “Blessed is He who comes in the name of the Lord. Hosanna in the highest.”