Posted on October 9, 2016 by Lutheran Church of the Resurrection 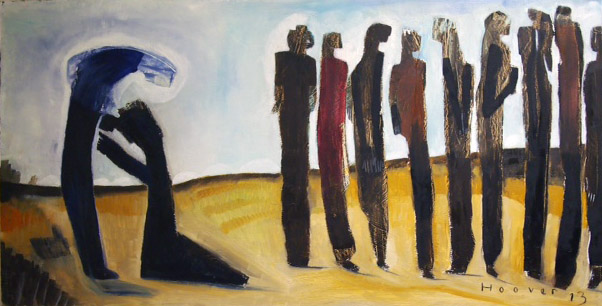 Today marks the 15th week since we left the 9th chapter of Luke’s gospel where we heard him tell us that “when the days drew near for Jesus to be taken up, He set His face to go to Jerusalem.” (Luke 9:51). 15 weeks now we’ve been on this journey with Jesus. And on every stop along the way, we’ve learned something about what it means to be a ‘follower of Jesus.’ We’ve learned something about ‘discipleship.’ Or at least, I hope we have.
• ‘Discipleship’ is that response to hearing the voice of Jesus Christ and His call – “Come follow me,” and denying ourselves and taking up our cross and “following Him.”

One of the things that we’ve learned along the way so far, (or at least I hope we have) is that ‘discipleship’ is costly, to borrow a phrase from Dietrich Bonhoeffer. It’s costly because it requires us to say ‘yes’ to Jesus and ‘no’ to ourselves. That’s called ‘self-denial’ which is very hard for us to do.

‘Discipleship’ is costly because very often, it requires us to say “no” to the temptations and demands of this world, which has no regard for God’s Word nor recognizes that Jesus Christ is that very Word of God. So the ‘disciple of Jesus’ learns that he or she must often say ‘no’ when everyone else is saying ‘yes,’ or vice-a-versa.

This also means that the ‘disciple’ of Jesus Christ is going to ‘stick out’ and be ‘different’ sometimes, just because he or she doesn’t ‘go with the flow.’ He says ‘right’ when other’s are all saying ‘wrong.’ She says ‘wrong’ when all her friends are saying ‘right.’

And the temptation along the way is always going to be to quit and turn back and take the easy way, the ‘wide path’ that it seems like everyone else is traveling and just go with the flow. But we don’t do that. Because we know that the ‘wide path’ doesn’t lead us to Jesus Christ, and apart from Jesus Christ, it’s all a pleasant swim in the river that is headed for Niagara Falls.

St. John, in his gospel, tells us that at one point in Jesus’ journey to Jerusalem, His disciples were turning back left and right because the cost of discipleship was getting too high. Jesus turned to His apostles and said, “Do you want to go away too?” And Peter, answering for them all said, “Lord, to whom shall we go? You have the words of eternal life.” (John 6:67-68)

On our stop on this journey with Jesus this morning, we meet a man who was going with the flow but who turned back. He left the crowd behind and became follower of Jesus because, well just because it became abundantly clear to him, Jesus Christ has the words of eternal life.

Luke writes, “On the way to Jerusalem, Jesus was passing along between Samaria and Galilee.”

So far, this journey with Jesus has taken place in the region of Galilee which is to the north. But now Jesus is beginning to move south to Jerusalem. But between Galilee and Jerusalem lies the region of Samaria with its much despised Samaritans. There was a much EASIER, SAFER, MORE ACCEPTABLE way to go from Galilee to Jerusalem that by-passed Samaria altogether, but Jesus doesn’t go with the flow.

“As He entered a village, He was met by 10 lepers who stood at a distance and lifted up their voices, saying, ‘Jesus, master, have mercy on us.”

They “stood at a distance” because leprosy is a contagious disease and the law required them to keep their distance from the non-leprous, which is why there were ‘leper colonies.’ Which all sounds reasonable enough until we realize that they were also quarantined from their own families and from the Temple where God was located and where the sacrifices for the atonement of their sins were made. Which means that there was no forgiveness for their sins – and the fact that they had leprosy made it obvious that they had lots of sins.

They “lifted up their voices, saying, ‘Jesus, master, have mercy on us.” You’ve got to wonder what they expected Him to do?

I remember some time ago hearing the story about a Sunday School teacher who was trying to teach this account to her young class and after telling the story as best as she could, she asked the children, ‘so, what would you do if you saw 10 lepers along the road?’ And one little boy raised his hand and answered, ‘teacher, if I saw 10 leopards along the road, I’d shoot them.’

Quite the contrary for Jesus. Luke writes, “He saw them…” He saw them like a father sees his dear children who are injured and helpless. He saw them like a shepherd sees his sheep who are lost and frightened. He saw them like their Creator who loves His creation, not because it is healthy and beautiful and has lots to contribute, but simply because He made them and they belong to Him.

How many others had they lifted up their voices to who walked right by them and never ‘saw them.’ Leprosy was a disfiguring disease that rendered a person hideous to look at and so rather than ‘seeing them,’ men and women would turn their faces away.

But now here is One who doesn’t turn His face away from them and refuse to look at their pathetic and wretched lives.

“He saw them” and did the UNEXPECTED THING. “Go show yourselves to the priests.”

Now there’s only one reason why a person with leprosy would ‘go show himself to the priests.’ The ‘priests’ at the temple were Israel’s health inspectors. After a thorough inspection, the “priests” had the authority to issue a certificate of ‘cleanness’ which allowed the former-leper to return to society and his family and, most importantly, to the Temple.

St. Paul writes, “Now faith comes from HEARING and HEARING through the word of Christ.” (Rom. 10:17) And that’s just how it happened for these 10 men. All 10 heard the Word of God from the mouth of God incarnate.

AND ALL 10 BELIEVED THE WORD THEY HEARD. How do we know they believed? Because “they went…” All 10 did what Jesus told them to do. James writes, “Show me your faith apart from works and I will show you my faith by my works.” (James 2:18). “Faith” obeys the Word of God. All 10 went.

For those 10 on that day all 10 Commandments were distilled down to one – “Go show yourselves to the priests.” For them, that was the only Commandment that really mattered. All 10 set out their own ‘journey to Jerusalem’ to see the Priest for a through physical.

And Luke writes, “as they went they were cleansed.” All 10 were cleansed. Their skin was all pink and smooth and wrinkle free. IT WAS A RESURRECTION OF THE BODY before their bodies were buried in the ground and before Jesus comes again. Each of these 10 men lived the dream of Job, whose flesh was as rotten as theirs but who confessed, “Yet in my FLESH I shall see God…” (Job 19:26).

It happened, “as they went…” BEFORE THEY GOT THE PRIEST. And to us it’s obvious. The healing came from Jesus – who is our new HIGH PRIEST, who has declared us to be CLEAN, all ready for Him to present us to His Father, “without spot or wrinkle or any such thing, that she might be holy and without blemish.” (Eph.5:27)

“But one of them, when he saw that he was healed, TURNED BACK, praising God with a loud voice and he fell on his face at Jesus’ feet, giving him thanks.”

One of them ‘SAW HIS LEPROSY’ and then ‘SAW HIS PERFECTLY RESTORED AND HEALTHY FLESH.’ Surely the others ‘saw’ this too. But this one saw something much more than just his skin and the new life that awaited him. His eyes were opened and HE SAW more than just himself. He SAW what the One who restored his skin and gave him back his life.

And he could go no further with his new, non-leprous life until he “TURNED BACK,” (which is the same word as “repentance.”) And as he “turns back” he is “praising God with a loud voice.”

It was for all 10 of these men that Jesus is on His way to Jerusalem. For all 10, He will be cut off from His family, His friends, His world… and even His God. The sacrifice of atonement prescribed in the book of Leviticus for the cleansing of their leprosy would be carried out upon His skin and flesh and body.

Their cleansing and restoration was just a preview of the greater cleansing and restoration that He has brought to pass. By His cross, He let all of our leprosy, both physical and spiritual EAT HIM UP until He was unrecognizable. “He was despised and rejected by man… as one from whom men hide their faces.” (Is.53:3) He took the leprosy of the world upon Himself for the sake of every leper either of body or soul.

And now, rather than sending you see the Priest, He sends you to Himself, because He is the Priest. And you meet Him, not in Jerusalem but in the Holy Baptism, and by this “washing of regeneration and renewal by the Holy Spirit,” He declares you to be CLEAN, even HOLY AS HE IS HOLY.

But only one turned back to give thanks to Jesus. “And he was a Samaritan.” Again, the religious ones don’t get it and the irreligious one does. The religious took all that the Lord gave them and their response was, “Do you thank the servant because he did what was commanded?” (Lk. 17:9) After all, that’s His job isn’t it? He is the Servant of the Lord and this is what He was commanded by the Father to do.

Jesus’ disappointment with the nine is almost palpable. “Were not ten cleansed? Where are the nine? Was no one found to return and give praise to God accept this foreigner? Then Jesus said, ‘Rise and go your way, your faith has made you well.’”

• All ten were healed but only one was made well.
• All ten knew they had been healed but only one knew who healed him.
• All ten were happy for themselves. Only one was able to look beyond himself to the source of his happiness.
• All ten knew the power of God. Only one knew the love of God.
• Nine went on with the life ready to ask Jesus for help again if they should ever need it. One could go no further with his life, but TURNED BACK and fell at the feet of the One who is the author and giver of life.

And he was foreigner. Not that he was from another country or another planet. He was a ‘foreigner’ to this world. And so are we.

For we too have TURNED BACK to come to this place where Jesus Christ is present.
– We have TURNED BACK from following the crowd on its merry way to wherever to LIFT UP OUR VOICES saying, “Lord, have mercy upon us,” and “Lord to whom shall we go, you have the words of eternal life.”
– And praised God saying, “Glory to you, O Lord,” and “Praise to you O Christ.”
– For He SEES US in our wretched and pathetic condition.
– And He sends us to meet Him at His banqueting table where He feeds us His holy flesh and holy blood.

And from here, we “rise and go” in the faith that He has given us – for we are WELL.