Posted on December 11, 2016 by Lutheran Church of the Resurrection 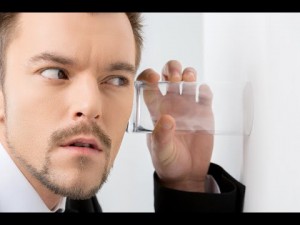 Eavesdropping on other people’s conversations is not a very polite thing to do. In fact, it’s liable to get you a dirty look and a ‘mind your own business.’ Reading other people’s mail is even worse. You didn’t ‘just happen to overhear’ what Sally said to Sam. You ‘pried’ into their private conversation.

That being said, there are exceptions to the rule. Some conversations are meant to be ‘overheard,’ and some letters are meant to be opened and read by anyone whose hands then happen to fall into. Take the Bible for example. Conversations between God and His prophets, or the Prophets and the people of God, or the people of God speaking to God are meant to be overheard and listened to. In fact, it’s the ‘RIGHT’ thing to do. Opening and reading the prophet’s mail and the apostle’s letters really should be done much more than we actually do.

This morning, we ‘OVERHEARD’ a message that John the Baptist sent to Jesus and that Jesus sent back to John. And rather than being told to ‘mind our own business,’ we hear our Lord say, “He who has ears let him hear.”

So if you will permit it, I have just this week, come into possession of two letters that I would like to share with you. The first is from John the Baptist written to his cousin, Jesus of Nazareth.

I. John to Jesus
Dear Jesus,

I am writing this letter to you from my prison cell in Herod’s fortress where I have been held for many weeks now. I was arrested by Herod’s soldiers for preaching against the king’s adulterous lifestyle. Some of the guards have told me that if I were to apologize and recant all that I have said and promise never to speak against the king again, I would be pardoned and be set free. But I am not willing to sell my soul to save my flesh.

My hope is in the Lord. And I am convinced that when He comes, He will make all things right, even as the prophets have promised, “He will set the prisoners free.” (Is.61:1). And so, in hope, I wait for the Lord.

Besides, what else would I do? I was called to be a prophet of the Lord from birth. How many times did I hear my father, Zechariahs, repeat the story of the day that the angel told him what he must name me John, and that I would be a prophet. “You my child shall be called the prophet of the most high. For you will go before the Lord to prepare His way; to give His people knowledge of salvation by the forgiveness of their sins…” (Lk.1:76-77)

I went into the wilderness of Judea and began to preach that the long awaited Messiah was ‘AT HAND’ and called people to repent of their sinful living and return to live by faith in God. “Even now the axe is laid to the root of the trees. Every tree that does not bear good fruit will be thrown into the fire… His winnowing fork is in his hand, and he will clear his threshing floor and gather his wheat into barn, but the chaff he will burn with unquenchable fire.” (Matthew 3:10-12)

If you judge my work by the great crowds that came and listened to my preaching and baptized, I was a ‘successful’ prophet. But now, here I am in prison. And I’m beginning to wonder. I am beginning to wonder what it was really all about and I’ve been having some doubts; doubts about myself, but mostly, doubts about whether or not you really are the long promised Messiah. So, my question is, “are you the one who is to come or shall we look for another?”

From the stories that I’ve been told by mother Elizabeth, I was more sure about you when we were just fetus’ in our mother’s womb than I am now.

Just a year ago, when you came to the Jordan River where I was preaching to be baptized, I was so sure that you were THE ONE. And my confidence soared when I saw the Dove that came out of nowhere land on you, and when I heard the ‘majestic voice’ in the sky say, “This is my beloved Son, with whom I am well pleased.” (Mat. 3:17)

But I always thought that when the Messiah comes, things would change… that everything would change. I thought that He would come with great power and might and rule with justice and equity for the peoples. I thought that He would overthrow “the kings of the earth… and the rulers that take counsel together, against the LORD and against his Messiah…” I though that the Messiah would “break them with a rod of iron and dash them in pieces like a potter’s vessel.” (Ps.2:2,9)

But the King continues to rule unjustly and boast about his immorality and the heathen boast that there is no God and God’s people to suffer persecution for their faith. And here I am, rotting away in prison, unjustly. And everything seems to be just as it always has been.

I was so sure when everything was going so well and everything seemed to be blessed by God. But now, I’m not as sure. Even though I preach to others, I myself do not see things as clearly as I should. I am ashamed of my doubts and I long to be rid of them, both so that my witness to others may not be weak, and so that I may be content and at peace, even while I am in these chains. So tell me, “are you the one who is to come or should we look for another?”

I am sending this letter to you by two of my trusted disciples. I pray that you would receive them as though you were receiving me.

Your loving cousin and servant,
John
And the other letter reads as follows:

I received your letter from your disciples. They tell me that you are doing well under the circumstances and that you are bearing faithful witness to the truth by your imprisonment for the gospel. They tell me that some whom you baptized in the wilderness work in Herod’s palace and they attend to you with service in love as they are able. They also tell me that you continue to bear witness to the TRUTH even in prison and that more than a few of Herod’s officials and servants have come to faith and have been baptized.

My dear John, even though you have been ‘locked up,’ the Kingdom of God is advancing through you because God’s Word cannot be restrained and your faithful testimony under persecution is a powerful witness.

You ask me if I am the ‘coming one’ or is there another whom you should expect? I will answer your question in this way. In every generation there have been false prophets who have claimed to be the promised Messiah.

Long ago, when My people were in the wilderness of Sinai, they asked the very same question that you are asking, “How may we know the word that the Lord has not spoken?” And Moses replied, “When a prophet speaks in the name of the Lord, if the word does not come to pass or come true, that is a word that the Lord has not spoken; the prophet has spoken it presumptuously. You need not believe him.” (Deut. 18:21-22).

Ever since Moses, the prophets have spoken in the name of the Lord, promising what the Messiah would do when He comes into the world. “Then the eyes of the blind shall be opened, and the ears of the deaf unstopped; then shall the lame man leap like a deer, and the tongue of the mute sing for joy…” (Is.35:5-6) These would be the signs to look for and that would certify that He is the One.

If the one who claimed to be the Messiah never did these things, then he is not to be believed. But John, I am doing these things. “The blind receive their sight and the lame walk, lepers are cleansed and the deaf hear, and the dead are raised up and the poor have good news preached to them.” Let these things that I am doing be the evidence that I AM WHO I AM.

The Kingdom of Heaven is at hand, just as you announced in the wilderness. But do not be deceived. My Kingdom does not come all at once as many suppose. It is like a mustard seed, that though it is the smallest of seeds, becomes a great tree, but over time, its branches moving out further and further, and bearing its fruit year after year.

But do not loose heart, there will come a time of reckoning and judgment when the wheat will be separated from the weeds like a fisherman separates the good fish from the bad. But that will not happen until the Last Day. And the LAST DAY is being delayed until the gospel is preached to the ends of the earth, and the lost are found and returned, and the elect are gathered in the harvest, so that many may be saved, and so that My banquet hall may be filled and My Father’s joy may be complete.

So do not grow weary or despair that your faithfulness has been rewarded with suffering and persecution. For I too will suffer and be imprisoned unjustly. And the governor will permit my death even as he will permit yours John. But I will be raised again on the 3rd day and you will be with me in paradise. And your faith will receive the reward of eternal life. “Blessed is the one who is not offended by me.”

In the meantime John, remain faithful and believe the word that has been given to you and that you have faithfully preached. You will not see Me again until you see me in glory, when everything shall be visible, and you will know fully even as you are fully known. Then, “the ransomed of the Lord shall return and come to Zion with singing; everlasting joy shall be upon their heads; they shall obtain gladness and joy, and sorrow and sighing shall flee away.” (Is.35:10)

“Peace I leave with you; my peace I give to you. Not as the world gives do I give to you. Let not your heart be troubled, John, neither let it be afraid. Peace be with you, John.” (Jn. 14:27)

Your cousin,
Jesus the Christ, the Son of God.

Eavesdropping on Isaiah, we hear him say, “Strengthen the weak hands, and make firm the feeble knees. Say to those who have an anxious heart, ‘Be strong; fear not!”

Reading James’ letter to the church, he writes, “Be patient therefore brothers, until the coming of the Lord. Establish your hearts.”