Posted on December 18, 2016 by Lutheran Church of the Resurrection 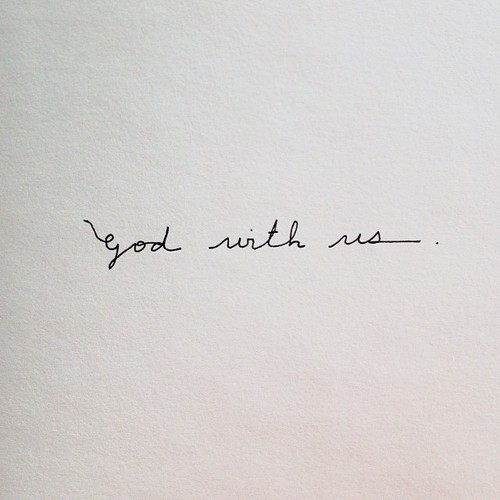 Way back in the beginning when there were just two people in the whole world… and really, how much damage can just two people do? But they did. “When the woman saw that the tree was good for food and to be desired to make one wise, she took of its fruit and ate…” She knew better because Adam had told her not to eat of the fruit from this ONE tree for on the day that you eat of it you shall surely die. She recited the LAW of GOD to the serpent like we recite the 10 Commandments and the Nicene Creed.

But she listened to that cunning serpent and his word got into her through her ears and an unholy thing was conceived in her and Eve gave birth to SIN and DEATH and every vice none to mankind that comes in-between those two.

But our attention this morning is not on THE WOMAN. It’s on THE MAN. Where was Adam while this was going on? He was right next to her. “…and she also gave some to her husband WHO WAS WITH HER, and he ate.” (Gen.3:6) He did NOTHING. He just stood there and watched as the serpent had his way with his wife. What a coward. What a wimp. He should have defended his wife. He should have protected her. He should have thrown himself between her and the serpent and said, “OVER MY DEAD BODY.”

But he did NOTHING and his NOTHING cost the whole human race its home in paradise.

And now this morning, we hear that the woman is pregnant once again – and once again by way of her ears – but not with the ‘UNHOLY seed of the serpent,’ but with the HOLY SEED of the Holy Spirit. “And therefore the child to be born will be called holy – the Son of God.” (Lk. 1:35)

But our attention is not directed so much to the WOMAN as it is to the MAN – her husband. THIS woman will be everything that THAT woman should have been but wasn’t. But what about THIS man? Will he be the HUSBAND that man failed to be?

“Now the birth of Jesus Christ took place in this way…” What Matthew says is, ‘IT HAPPENED!’ Which sounds rather obvious but it needs to be said because these days a lot of people are not so sure that it REALLY HAPPENED – but even if it didn’t REALLY HAPPEN, it’s still a heartwarming story that moves everyone but the hardest of hearts to be a little nicer and show a little extra love during this holiday season. But Matthew says, “IT HAPPENED,” and “HERE’S HOW IT HAPPENED.”

“When his mother Mary had been betrothed to Joseph, before they came together she was found to be with child from the Holy Spirit.”

We’re not given any of the little details about how Joseph and Mary met and what they’re first date was like and what was their most embarrassing moment, and how Joseph finally popped the question…, the kind of stuff that if it were People Magazine, we would certainly have been told, even if never got to the part about FROM THE HOLY SPIRIT.

The important thing to know here is that Mary was BETROTHED to Joseph. Which is something like our ‘engagement,’ but not quite. The Jewish practice of BETROTHAL was much more serious and more binding than our ‘engagement.’ The woman continued to live at home and the marriage was not consummated until the wedding. But even while they are still BETROTHED, they are already referred to as HUSBAND AND WIFE. And if either wanted to break off the BETHROTHAL, a certificate of divorce was required.

Matthew begins his account where Luke leaves off. Luke tells us that after Mary was WITH CHILD BY THE HOLY SPIRIT, she rushed off to visit cousin Elizabeth, probably to confirm that the word of the angel was actually true. Matthew picks it up THREE MONTHS LATER when she returns to Nazareth and she’s beginning her 2nd trimester, which means that she’s beginning to show.

After being separated for three months, Joseph and Mary would have embraced, and as Matthew delicately describes it, “she was found to be with child.” But then quickly adds, “by the Holy Spirit.” No hanky panky here Joseph.

Again, we get nothing of the conversation that MUST have taken place between these two,
• Mary trying to explain to Joseph about the visitation of an angel, (oh, yea, right Mary. Angels? Really? Is that the best you can do).
• Mary trying to explain to Joseph that child in her was conceived by the Holy Spirit. (Mary really, what do you take me for? I’m a religious guy, but I’m not crazy).
• Mary trying to tell Joseph that she already knows that IT’S A BOY and that we need to name Him JESUS, (Come on Mary, you’re being ridiculous about this.)

Joseph had every right to break it off with Mary AND he had every right to publicly humiliate her for being unfaithful. He was within his rights to make an example out of her, and I’m sure that the other BETROTHED men in the village were encouraging him to do just that so that their wives didn’t get any ideas.

“And her husband Joseph, being a just man and unwilling to put her to shame, resolved to divorce her quietly.” Which is to say, he decided to ditch her ‘NICELY.’ And once again, the MAN will be the coward and the wimp and fail to do RIGHT thing.

“But as he considered these things, behold, an angel of the Lord appeared to him in a dream, saying ‘Joseph, son of David, do not fear to take Mary as your wife, for that which is conceived in her is from the Holy Spirit. She will bear a son, and you shall call his name Jesus, for he will save his people from their sins.”

It’s right at this point when every man in the room is slinking down in the pew because he knows what’s coming next. And every woman in the room is thinking the same thought. “I told you. You should have listened to me.” Or at least that’s the way it would have read in People.

“Joseph, I know that this is hard to grasp and even harder to accept, but things are not as they seem. There’s no adultery here. Mary is innocent. God is the child’s father and the child is both the Son of God AND the son of Mary. And Mary is the mother of Jesus AND the mother of God.

How hard was must it have been for Joseph to wrap his head around this? About as hard as it is for us.

The God who fills the universe with His being is a tiny fetus contained within the cramped quarters of a woman’s womb. God, who is spirit and who rules over the whole creation, takes on human flesh and bones and blood and is ruled over by His mother and is TOTALLY DEPENDANT on Joseph to DO THE RIGHT THING.

One of the inalienable rights that parents have is that they get to name their children. Back there in the Garden of Eden, God told Adam to ‘name’ all the animals in the Garden. “Now out of the ground the Lord God formed every beast of the field and every bird of the heavens and brought them to the man to see what he would NAMED them. And whatever the man called every living creature, that was it NAME.” (Gen. 2:19)

“Naming” something or someone is significant. To give something its name is to have dominion and authority over it. Adam even names his wife. “She shall be called Ishah , for she was taken out of Ish.” (Gen.2:23). When Adam names His wife, He gives her his own name.

“All this took place to fulfill what the Lord had spoken by the prophet:
‘Behold the virgin shall conceive and bear a son, and they shall call his name
Immanuel” (which means, God with us.)’”

And He shall be called “Immanuel,” which is translated, “God with us.” “God with us” just like God was with Adam and Eve in the Garden of Eden in the beginning. “God with us” now, in this hostile place that we have created by our sin.

But He was conceived by the Holy Spirit and so He is also ‘GOD WITH US.’
• “Immanuel,” who has become flesh of our flesh and bone of our bone and BETROTHED Himself to us.
• “Immanuel” who refuses to divorce us for our unfaithfulness, but stands beside us and throws Himself between us and the devil who tempts and accuses us saying, “OVER MY DEAD BODY.”
• “Immanuel” who has taken us to be His bride in the matrimonial rite of holy baptism, where He has given us His Name.
• “Immanuel” who brings His bride to live with Him in Paradise forever.

“When Joseph woke from sleep, he did as the angel of the Lord commanded him: he took his wife, but knew her not, until she had given birth to a son. And he called his name, Jesus.”