Posted on February 5, 2017 by Lutheran Church of the Resurrection 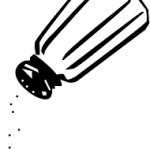 “You are the salt of the earth.” “You are the light of the world.” These are the words that immediately follow the words we heard last Sunday – the Beatitudes. “He opened His mouth and taught them…” His teaching was not ‘teaching’ as in ‘instruction for how to be a disciple of his.’ “If you do this, then you will be my disciple and receive all the blessings that come with discipleship.” That’s the teaching of every other religion in the world. “If you do this you will be blessed.” First works, then if you’ve maintained at least a C+ average – blessing.

But what Jesus teaches, in perfect harmony with whole bible because, after all, it’s all by Him and about Him, is unique. “Blessed are you…” and here are the works that follow. First blessing and grace and forgiveness and the Holy Spirit and a whole new life in Christ, then go be the person God has re-created in His image to be.

So, there on the mountain, He put His blessing on them nine times. “Blessed are you…” By the power of His strong word alone, He brings them into the Kingdom of heaven where He rules as King of kings and Lord of lords and the good shepherd of His sheep.

And then, no sooner does He bring them into His kingdom and put His blessing on them, but He sends them right back out into the world again. “You are the salt of the earth.” “You are the light of the world.”

He had to put His blessing on them before they could be a blessing; just like He did with Adam and Eve in the beginning. “And God blessed them and said, ‘Be fruitful and multiply and fill the earth and subdue it.” (Gen.1:28) First He puts His blessing on them and then He sends them into the world.

Salt of the Earth

“You are the salt of the earth.”

In Jesus day, salt was a basic commodity that was impossible to live without. Before refrigeration, salt was the only way to preserve food from spoiling. It was also important for basic first-aid to sterilize cuts and wounds. It bites and stings as it preserves and purifies.

Jesus calls His disciples “the salt of the earth,” which sounds not quite right. Jesus Christ is the One who PRESERVES and PURIFIES the whole world with His body and blood. But as He puts His blessing onto them, they become ‘little Jesus’’ to the world. He is ABIDES WITH THEM and LIVE IN THEM.

Which is just the way it happened for each of us. We’re here today because they salted the earth with Jesus. We were salted with Jesus as we listened to His Word and were baptized into His name and ate and drank His body and blood. The Lord pours His salty word and sacraments onto our wounded souls and decaying bodies. And it bites and stings even as it PRESERVES and PURIFIES us. “Blessed are you…”

This is the way that our Lord puts His blessing on US just as He did His disciples. And with His blessing, He sends US out into the world – “You are the salt of the earth.” Wherever the Lord sprinkles and scatters us, our home, our community, our factory, our classroom, our nation – we are the “salt of the earth” in that place.

Men and women, boys and girls who live in the world with faith. Faith that, as we heard Paul say, “rests, not in the wisdom of men but in the power God.” Christ our Lord has scattered us into this crazy and confused and fallen world, to live “not according to the spirit of the world, but the Spirit who is from God…” (1 Cor. 2:6-12)

And so we shouldn’t be surprised or confused if a wounded and decaying world responds to our saltiness with, “Hey! That stings! That burns!” Remember what Jesus said, “Blessed are you when others revile you and persecute you and utter all kinds of evil against you falsely on my account. Rejoice and be glad for your reward is great in heaven, for so they persecuted the prophets who were before you.” (Mat. 5:11-12).

The sting of salt sprinkled onto an open wound has the same feeling as the Law of God sprinkled onto the sinner. It stings those little cuts and scratches that you didn’t even know were there, and it burns those festering wounds that you thought would heal on their own over time.

The Law makes us shout, ‘Hey, that stings!’ ‘That burns!’ And now we’re ready for soothing balm of the gospel – the good news that Jesus has fulfilled every “iota and dot” of the Law on our behalf and in our place and in Him there is forgiveness and new life and we are blessed.

Light of the World

Jesus continues, “You are the light of the world.” Different analogy but the same idea. Light stands opposed and overcomes darkness. In the beginning, the whole world was covered in darkness. “And God said, ‘let there be light, and there was light.’” It wasn’t that there was no more darkness, but the darkness knew its place and stayed there. “God separated the light from light from the darkness.” (Gen. 1:3-4)

It wasn’t until Adam and Eve brought sin into the world that the darkness started to “overcome the light” and refused to stay where it belonged.

Sometime later, sounding almost as though God were creating the world all over again, Jesus made the bold declaration, “I am the light of the world. Whoever follows me will not walk in darkness but will have the light of life.” (John 12:18) As we earlier confessed with the Psalmist, “Light dawns in the darkness for the upright; he is gracious, merciful, and righteous.” (Psalm 112:4)

The “light that dawns the darkness” is Jesus Christ, in whom “the Law and the Prophets is fulfilled.” He who ‘dawned’ in the beginning, and once again on the 3rd day, says to His disciples, “You are the light of the world.”

As He places His blessing on them, and through them on us, “His face shines on us” and we reflect His glory onto a dark and fallen world. We are a reflection of His light onto this world in a similar way as the moon reflects the light of the sun onto the earth. It’s not our light. It’s His.

And it shines out from us onto the world through the good works that we do. “Let your light shine before men that they may see your GOOD WORKS and give glory your Father who is in heaven.”

Sometimes we Lutherans are so afraid that our ‘good works’ might become the basis for our confidence before God that we treat them as though they were a bad thing. Not at all. Good works have their place and this is it – “BEFORE MEN.” We don’t do ‘good works’ before God so that He might see them and give glory to us.

We do the good works that “God has prepared in advance for us to do.” (Eph.2:10). Good works like the ones that Isaiah pointed us to, “to loose the bonds of wickedness… to let the oppressed go free and to break every yoke; to share your bread with the hungry and bring the homeless poor into your house, when you see the naked, to cover him.”

And as we do these good works that Jesus’s words that “they will give glory to your Father who is in heaven.” “THEN SHALL YOUR LIGHT BREAK FROTH LIKE THE DAWN… AND YOUR RIGHTEOUSNESS SHALL GO BEFORE YOU AND THE GLORY OF THE LORD SHALL BE YOUR REAR GUARD.” (Is.58:6-8)

So, contrary to what we might have expected, Jesus DOESN’T say, that other will see your FAITH and “give glory to your Father who is in heaven.” ‘Faith’ is invisible to the human eye. Only God can see your ‘faith’. People can only see your works – YOUR GOOD ONES AND YOUR BAD ONES. They see your life and how you live it. They see what Sunday mornings mean to you and what’s important to you. You may not think they see it, but they do. If not now, they will.

But in their seeing Him in all His glory, they will them all – each and every one of them. And even if it is too late to save them, they will give glory to “your Father who is in heaven.”

So, we dare not become concerned that it doesn’t seem like anyone actually “sees your good works and gives glory to your Father in heaven.” That’s not what drives us to be the ‘salt’ and ‘light of the world’ that Jesus has put His “blessed are you” on us to be. In fact, that’s the darkness that drove the Scribes and the Pharisees who did their good works to be seen by men and earned Jesus’ “woe to you.”