Posted on February 19, 2017 by Lutheran Church of the Resurrection 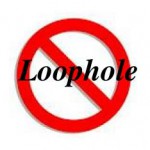 As you know it is our custom here to have the candidates for the Rite of Confirmation write and read an essay on the Christian faith to the congregation. Many years ago, I can still remember one candidate who, drawing on W.C. Fields famous line, began his essay by saying that he set out to study the 10 Commandments to see if he could find any ‘loopholes’ in them.

“Loopholes” are those little ‘exceptions’ or ‘inconsistencies’ that allow you to get around the law without ACTUALLY keeping it AND without ACTUALLY breaking it. “She used a loophole in the tax law to avoid paying the taxes she owed.” “His lawyer found a ‘loophole’ in the law that allowed him to get out of the contract.”’ “The legislature is working hard to close the ‘loopholes’ in the new legislation…”

This is now the 4th consecutive Sunday that we’ve been making our way through Matthew’s fifth chapter which began with the familiar Beatitudes – “blessed are you.” Jesus is speaking particularly to His disciples whom He will send with His blessing to be “salt of the earth” and “light of the world.” These are the 12 whom He will commission to go to “all nations, baptizing and teaching everything I have commanded you.” (Mat.28:18).

They are to give eyewitness testimony of what they have heard Him speak and seen Him do, so that those who hear them will actually be hearing Jesus Himself. They are to be the “viva vox Jesu,” the ‘living voice of Jesus.’

Somewhere between the giving of the Law on Mt. Sinai and the present day, lots of ‘loopholes’ had been discovered in the 10 Commandments. Or so it was said. And where no loopholes in the law could be found, special exemptions and exceptions were created. Clever lawyers are nothing new.

Sinful and fallen men and women will always strive to justify themselves before the almighty God according to their keeping of God’s Law. And when they realize that they can’t keep the Law perfectly and that they are no different that “all who fall short,” they’ll start looking for ‘loopholes,’ or special exemptions or exceptions. Clever lawyers will always be in demand.

“Oh, that was for those people back in the Old Testament. Now that we’re in the New Testament, none of that applies anymore.”

Recall two Sunday’s ago when we heard Jesus say, “Do not think that I have come to abolish the Law or the Prophets; I have not come to abolish them but to fulfill them. For truly, I say to you, until heaven and earth pass away, not an iota, not a dot, will pass from the Law until all is accomplished.” (Mat. 5:17-18).

“But I say to you…” And one by one, Jesus draws out the true meaning and purpose of God’s Law and what it ACTUALLY means how we should strive to live by it.

It’s like the issue that we have in this country over trying to understand the intent and meaning of the Constitution. We’d like to ask the founders and authors of the Constitution but they’re dead and we can’t ask them. But here is Jesus Christ, the author of the Law of God and He’s telling us what it means and God’s intent for the Law.

I. Love the Wrongdoer
This morning, we hear Jesus instruct His disciples saying, “You have heard that it was said, ‘An eye for an eye and a tooth for a tooth.’”

A famous law for the purpose of protecting the WRONGDOER who has caused injury to someone. The punishment must be in proportion to the crime.

It’s an eye for an eye – not a life for an eye or even both eyes for one eye. It’s not a LICENSE to punch him in the eye or sock him in the jaw. It’s a law that says, ‘you’d better think very carefully about how you plan to respond because you could very easily end up being just as guilty.”

Everyone is born with a voice inside them. And whenever we’ve been wronged, its starts mouthing off, “you better keep score; it’s tit for tat; even-steven; do what you have to do but just be sure to get even.” “Didn’t Moses say, ‘an eye for an eye and a tooth for a tooth? You’re not going to argue with Moses are you?’” “It’s your right to get revenge.”

But listen to Jesus. “But I say to you, Do not resist the one who is evil. But if anyone slaps you on the right cheek, turn to him the other also. And if anyone would sue you and take your tunic, let him have your cloak as well. And if anyone forces you to go one mile, go with him two miles. Give to the one who begs from you, and do not refuse the one who would borrow from you.”

Never forget, always remember that this is from the One who was struck in the face by the soldiers, who took His cloak and His tunic and who was forced to carried His cross to the place of the skull, who gave His life to a world begging for life – gladly, willingly, with no thought of revenge, for there was no other voice inside of Him but the voice of the Holy Spirit.

The only innocent one was murdered by WRONGDOERS like you and me. The blood of Abel cries out for revenge against Cain. But the blood of Jesus cries out a better word. “Father forgive them…,” a better word that breaks the chain reaction of revenge upon revenge.

“An eye for an eye and a tooth for a tooth” is a law that is meant for governments and societies that are responsible for carrying out justice and protecting citizens, but not for the individual Christian.

The Christian lives by faith in God, who has carried out all of the revenge for all of the wrong done to you in His Son, Jesus Christ and Him crucified. He has broken the cycle of revenge upon revenge and now calls us to follow Him in a life of RECKLESS NAIVETÉ – in meekness and humility that is blessed by God.

As we show love and mercy to the WRONGDOER who TAKES ADVANTAGE of our generosity or our HUMILITY, we show others Jesus, who loves the WRONGDOER because He loves the whole world.

This is the “righteousness that surpasses that of the Pharisees” because it puts all trust in God’s Son, who is the “righteous one” and who has kept every ‘jot and iota’ of the law – BECAUSE IT IS GOD’S LAW AND IT IS GOOD because God is good. As we follow Him, we are the “salt of the earth” and “the light of the world.”

But not to worry, a clever lawyer can find the ‘loopholes’ in any law. “Who is my neighbor?”

And once you determine who your neighbor is, then you are able to determine who your neighbor is not. And if he’s NOT YOUR NEIGHBOR, then ‘legally,’ you’re well within your rights to HATE him – the gentile, the tax collector, the sinner; the foreigner who worships false gods, the boy who dresses like a girl and the girl who thinks she’s a boy, the Democrat or the Republican who’s politics are all wrong.

The clever lawyer says, ‘they’re not your ‘neighbors. They’re your ‘enemies’ and so it’s okay to HATE them. In fact, you SHOULD hate them.’

The Pharisees got upset with Jesus because He didn’t HATE whom He’s supposed to HATE. He even eats with them.

Listen to Jesus. “But I say to you, Love your enemies and pray for those who persecute you, so that you may be sons of your Father who is in heaven. For he makes his sun rise on the evil and on the good, and sends rain on the just and on the unjust. For if you love those who love you, what reward do you have? Do not even the tax collectors do the same? And if you greet only your brothers, what more are you doing than others? Do not even the Gentiles do the same?

Jesus cuts to the heart of the Law which is to love your neighbor, even the evil ones and the unjust ones and the confused ones and the ones who have their politics all wrong… BECAUSE HE DOES.

The early church used to preach that if you love those who hate you, you won’t have any enemies. That’s gets to the heart of this Law. As the Christian Church, the body of Christ, loves its neighbors and its enemies, we reveal to the world something about the God whom we worship, who is good to both the “evil and the good”, the “just and the unjust.”

This is how “your righteousness surpasses that of the Pharisees.” This is how you are “the salt of the earth” and “light of the world” that you have been called to be.

The Law is PERFECT – it is complete and good because it is from God. Therefore, we’re simply not interested in finding loopholes or exemptions or exceptions to excuse our sin and justify ourselves.

We follow Jesus, who kept “every jot and iota” of the Law for us, on our behalf, and has closed every loophole by making us PERFECT in His sight – APART FROM THE LAW.