Posted on June 5, 2017 by Lutheran Church of the Resurrection

In our opening hymn, we sang, “Come Holy Spirit, God and Lord. With all Your graces now outpoured on each believer’s mind and heart.” (LSB #497:1) 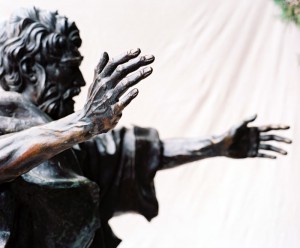 Martin Luther wrote those words to our Opening Hymn this morning for the Day of Pentecost. Luther wrote lots of hymns for the church because hymns are a good way to teach the faith and carry right teaching and right praying from one generation to another. I’ve never had anyone ask me to preach a favorite sermon again or give me a list of sermons that they’d like to hear preached again. But it’s not unusual for someone to give me a list of their favorite hymns (hint, hint).

Of all of the great holidays on the Church’s calendar, the day of Pentecost may be the most mysterious and the hardest to comprehend.
 Christmas is easy. A baby was born. We all know how that happens. Happens all the time.
 Good Friday is all about the death of that child. We all know more about death than we care to.
 Easter is all about the resurrection of that man from the dead, a little more mysterious than birth and death maybe but we see it all the time in nature – especially this time of year.
 The Ascension of our Lord may seem strange at first. We used to doubt that man actually fly to the moon. But now that he has, heaven doesn’t seem that much further away.

But Pentecost?
• How are we supposed to understand “a sound from heaven,” that sounds like a WINDSTORM that is going on in a particular house?
• And what looks like “fiery tongues” resting on the disciples and no one gets burned?
• And then those on whom these “fiery tongues” rest, speak in foreign languages than they had never learned how to speak.
How are we to make any sense of that?

As you can imagine, it was the kind of spectacle that attracted a lot of attention. It was the ‘sound’ that caused them to come. “At the sound, the multitude came together…” God was drawing people into His church by their ears.

And then when they saw the “fiery tongues” and heard these disciples of Jesus speaking in a foreign languages to men and women from all over the world and despite the fact that everyone was speaking at once, each spectator heard his own native language being spoken.

They comprehend it either. And there was no hymn written to explain it. “And all were amazed and perplexed saying to one another, ‘What does this mean?’

Luke tells us that the disciples were all “sitting” in the house when all this happened. But after “the multitude” showed up, and after all the sound died down, and the “fiery tongues” lifted, the 12 Apostles of Jesus “stood up.” And Peter, speaking for the 12, lays down a fundamental hermeneutical principle – ‘SCRIPTURE INTERPRETS SCRIPTURE’ – saying that this is what the prophet Joel had prophesied over 800 years ago.

“But the Helper, the Holy Spirit, whom the Father will send in my name, he will teach you all things and bring to your remembrance all that I have said to you.” (John 14:26)

And again he said to them, “I tell you the truth: it is to your advantage that I go away, for if I do not go away, the Helper will not come to you. But if I go, I will send him to you. And when he comes, he will convict the world concerning sin and righteousness and judgment…” (John 16:7-9)

Jesus wasn’t not adding anything new that hadn’t already been promised in the Old Testament – except that He is the One that it all pointed to.

But what I find interesting about all this is the utter contrast in the reaction of these same disciples to Good Friday and Easter. Because Jesus had also repeatedly told them exactly what to expect about His betrayal and crucifixion and resurrection on the 3rd day.

“And he began to teach them that the Son of Man must suffer many things and be rejected by the elders and the chief priests and the scribes and be killed, and after three days rise again.” (Mark 8:31)

And again he said to them, “The Son of Man is going to be delivered into the hands of men, and they will kill him. And when he is killed, after three days he will rise.” (Mark 9:31)

And again, “taking the twelve again, he began to tell them what was to happen to him, saying, “See, we are going up to Jerusalem, and the Son of Man will be delivered over to the chief priests and the scribes, and they will condemn him to death and deliver him over to the Gentiles. And they will mock him and spit on him, and flog him and kill him. And after three days he will rise.” (Mark 10:32-34)

And this too was nothing more and nothing less than Old Testament prophesy being fulfilled in Jesus. But on Good Friday and Easter Sunday, these same disciples were “amazed and perplexed” and wondered, “what does this mean? They were scared to death, huddled together behind locked doors.

Now, there was only one more thing that needed to be opened – and that was their MOUTHS. How often had Jesus ALSO TOLD THEM, “do not tell anyone…”? It wasn’t because He wanted His name and His mighty deeds to be kept hidden. But the Day of Pentecost had not yet come. AND THE SCRIPTURES MUST BE FULFILLED.

Who knows that after Jesus showed them His wounds and breathed on them, the disciples weren’t like race horses at the gate ready to run – but Jesus says, “Behold, I am sending the promise of my Father upon you. But stay in the city until you are clothed with power from on high.” (Luke 24:49)

Just as the Prophets in the Old Testament never spoke on their own accord or according to their own interpretation of things, neither will the Apostles in the New Testament. As Peter will explain, “Know this first of all, that no prophecy of Scripture comes from someone’s own interpretation. For no prophecy was every produced by the will of man, but men spoke from God as they were carried along by the Holy Spirit.” (2 Peter 1:20-21)

These were not CLEVER MEN. I suspect that a large part of the reason that the Gospels portray these men as frustratingly selfish and silly and blind and ignorant – is so that when they speak with the WISDOM OF GOD, we might see all the more clearly that this is not LIKE THEM. A radical change has taken place in them. The Holy Spirit has come upon them and the words that they speak are not their words but God’s Word.

On the “DAY OF PENTECOST,” the Ascended Lord Jesus, once again breathes the Holy Spirit onto His disciples. In His ‘LITTLE PENTECOST’ He OPENED their EYES and their MINDS and their HEARTS. In His BIG PENTECOST, He OPENS THEIR MOUTHES.

And now, as they PREACH, they BREATHE the same Holy Spirit onto the multitude that is gathered around them.
And at the end of the sermon, 3000 of those who were previously “amazed and bewildered” and wondered, “what does this mean,” cried out, “what must we do to be saved?” 3000 pairs of EYES were OPENED. 3000 MINDS were OPENED. 3000 HEARTS were OPENED. And 3000 were baptized into Jesus Christ.

It doesn’t happen in any other way than this. Luther puts it like this, “I believe that I cannot by my own reason or strength, believe in Lord Jesus, my Lord, or come to Him. But the Holy Spirit has called me by the Gospel, enlightened me with His gifts, sanctified and kept me in this one true faith.”

As the Apostle’s Word, is preached from the pulpit, and taught in the classroom and gossiped in the marketplace and discussed at the kitchen table, the Holy Spirit, “calls, gathers, enlightens, sanctifies and keeps” His people “in this one true faith.”

By these ‘means of grace,’ the Spirit of God has “called, gathered, enlightened, and sanctified” Eleanor and brought her into the very body of Jesus Christ – which is His Church – In this Christian Church, He daily and richly forgives all [her] (my) sins and the sins of all believers.

This is most certainly true.