Posted on June 12, 2017 by Lutheran Church of the Resurrection

The Nature of Creeds
A. Creeds and Conflict

When there’s conflict over doctrine, you need a Creed to set things straight. Creeds and conflict go together. Creeds say, “this is what the bible says about God and therefore what we can say about God – and what we cannot say about Him.” A big part of what Creeds do is they SEPARATE. And they separate the Christian from the non-Christian.

B. Creeds and Unity 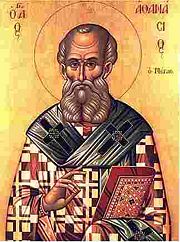 But an EVEN BIGGER PART of what Creeds do is they UNITE. Creeds unite Christians together into a COMMUNION OF SAINTS. Creeds create solidarity in the Church. We all agree to agree on what this Creed or that Creed says about what the Bible says about God. Creeds allow us to speak the Christian faith together – with ONE VOICE – not only with one another here – but also with our brothers and sisters in Christ who are of different denominations – but who speak the same words about God as we do.

That’s what that little word “catholic” with a “little ‘c’ means. “Catholic” is a Greek word that means “universal.” When we said, “And the CATHOLIC faith is this…” we mean that the faith of the ONE, HOLY CHRISTIAN CHURCH is this…

So, I hope you can see how the Creeds work to UNITE Christians together and why they’re so important in the life of the Church. All who confess the FAITH as carefully hammered out in the Creeds are members of the One, Holy, Catholic and Apostolic Church and all who cannot are not.

C. The Universal Creeds
Just to be clear, Creeds don’t come down out of heaven. Creeds are human words that say divine things. If someone were to ask you to put the whole Old and New Testaments into three words that define the essence of its meaning and distinguish it from false belief, could you do it?

Actually, that’s what the very FIRST CREED on record does. The first Creed that Christians recited together that separated right from wrong and united true believers together was the three word Creed – “Jesus is Lord.” The essence of the entire Old and New Testament is summarized perfectly in those three words. If you can say those three words in sincerity and truth – you’re a Christian. If you can’t – then you’re not.

In time, people began to say things about Jesus that didn’t fit with what the Bible says about Jesus. And so the THREE WORD CREED had to be expanded.

The Apostle’s Creed states what the Bible says about God in three articles, God the Father, God the Son and God the Holy Spirit. But it was the 2nd Person of the Trinity that required the most clarification. The big question was – “Who is Jesus?”

Over time, a concise statement about WHO IS JESUS developed that focused on His HUMILIATION: “He was conceived by the Holy Spirit, born of the virgin Mary, suffered under Pontius Pilate, was crucified, died and was buried.” And then it carefully described His EXALTATION: “He descended into hell, rose again on the 3rd day, ascended into heaven and sits the right hand of God the Father almighty, from where He will come to judge the living and the dead.”

Then there was a big question about whether or not Jesus is God in the same way that the Father and Spirit is God. And that required another Creed which we call the NICENE CREED which especially clarifies what the Scriptures say about the divinity of Jesus. “He is the only begotten Son of God, God of God, Light of Light, true God true God, begotten, not made, being of one substance with the Father, by whom all things were made…”

And then there was a big controversy in the Church about how the Scriptures describe how each person in the Trinity relates to the other.

So the Athanasian Creed tries to draw a bold, clear line through all of these questions to keep the faith TRUE and keep the Church UNITED around the TRUTH.

The Incomprehensible Nature of God

A. The Trinity is Incomprehensible.
Well, that’s really a long introduction to the topic we’re supposed to be focused on today which is THE TRINITY and how the ATHANSIAN CREED talks about the relationship between the Father and the Son and the Holy Spirit.

Thinking and speaking about the Trinitarian nature of God is like wandering into quicksand. It doesn’t take too long before you realize that you’re in over your head.

What is incomprehensible to our size small brain is that God, as He describes Himself in the Holy Bible is a PLURAL SINGULAR. Christianity is a monotheistic religion that worships a TRIUNE God – Father, Son and Holy Spirit – each PERSON is fully God but there are not THREE GODS, but ONE GOD.

I want to make three points about this incomprehensible God whom we worship.

The saints and angels in heaven are not blinded by sin as we are. They see God “as He is,” and they comprehend Him perfectly and completely. They don’t need a Creed to spell it out for them, they know Him fully even as they are fully known by Him.

That’s why we don’t praise God all the time and with everything. It’s why we don’t make our every thought, word and deed a song of praise and honor to God like the saints and the angels do. It’s because our eye has been made blind by sin.

Sin is ALSO an important doctrine to grasp. Otherwise, we think that God wants to be UNKNOWABLE to us and HIDDEN from us. And that is to misunderstand the nature of the TRIUNE GOD entirely.

C. We Comprehend God in Jesus
That brings us to the second point we want to make. We worship a God whom we cannot not fully comprehend FOR NOW. That’s just the way it is. And God has never been shy about telling us to worship Him – even while we cannot completely comprehend Him. It’s what’s called TRUST.

It’s TRUST – not comprehension that God wants from us. It’s TRUST like that of a little child that He delights in – not the wisdom of the wise or the intelligence of the intelligent.

This TRUST that the Triune God requires of us is not a BLIND TRUST. “Just trust Me.” No, He gives us a reason to TRUST Him. And that REASON FOR OUR TRUST is His Son, Jesus Christ.

In Jesus Christ, even “eyes made blind by sin,” may comprehend God in all of His love for
• “in Him, the whole fullness of deity was pleased to dwell.” (Col. 2:9)
• He is the “image of the invisible God.” (Col.1:15).
• “He is the radiance of God’s glory and the exact representation of his being…” (Heb.1:3).
• “For God who said let the light shine out of the darkness has made his light shine in our hearts to give us the light of the knowledge of the glory of God in the face of Christ.” (2 Cor. 4:6).

• When we see this 2nd person of the Trinity, “who is of the Father alone, not made nor created but Begotten,” taking our place in the judgment of God;
• when we see Jesus Christ – “perfect God and perfect man, of a reasonable soul subsisting,” crucified on the cross for our sin so that we might be reconciled to God;
• when see– in Him “who is God of the Father, begotten before the worlds; and man of the substance of his mother, born in the world,” the holes in His hands and feet and His side and hear Him say, “Father forgive them…”
• we see THE FULLNESS OF GOD in FULLNESS OF HIS love love for you.

And we can’t COMPREHEND a love like this. But we can COMPREHEND enough of God in Christ to know that we want more of it – and we never want to be apart from Him – and if Jesus is all that we can COMPREHEND of God for now, it’s ENOUGH – and I will worship this incomprehensible TRIUNE GOD based on faith in Jesus Christ alone.

D. We Will Comprehend God In Heaven
And then, the third point is this. One day, if we persevere in this “catholic faith” – the veil of our sin will be completely removed from our eyes and we too will “see Him as He is” – no longer incomprehensible – every Creed made obsolete – we will know God fully even as He fully knows us.

And this comprehension will produce in us more worship, more joy, more real happiness than we can now comprehend in this world of sadness and sorrow and disappointment.