Posted on January 15, 2018 by Lutheran Church of the Resurrection 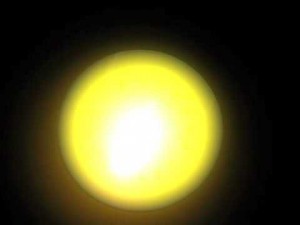 The season of Epiphany is all about the revealing of “the glory of God revealed in the face of Jesus Christ,” as St. Paul puts it. (2 Cor. 4:6). The word ‘epiphany’ literally means, ‘bring light.’ On Christmas, the ‘bright light’ of the glory of God came into this world, but it was all wrapped up in flesh and swaddling clothes and if it weren’t for those angels and their ‘bright light’ telling the shepherds where to go and what they’d find, you’d swear it was just another baby.

After the ‘Christmas rush’ dies down and all the family goes back home and the last of the pine needles are finally vacuumed up, life gets back to normal. That’s the way it was for the holy family. Other than a visit from some strangers from the East, a couple of visits to the Temple and a trip to Egypt, there’s really not much to report.

For 30 years, God was in the flesh, dwelling among us, and no one knows, no one sees it. Can you imagine growing up with Jesus and never knowing who He is? You sat right next to Him in 3rd grade. He was your lab partner in biology. Your fishing buddy, and that coffee table in your living room, he made it – and WHO KNEW?

But then 30 years after Christmas, He comes to the Jordan to be baptized, and the heavens open and the Holy Spirit descends on Him and a voice from above declares, “You are my Son, with You I am well pleased.” And a strange man named John points his boney finger at Him and says, “Behold, the Lamb of God who takes away the sin of the world.”

And lots of people said, “Well I’ll be. I never would have guessed.” But then the light goes on. THAT’S ‘EPIPHANY.’ ‘Epiphany’ is the OMG moment that people have when they ‘SEE’ what had been right in front of them all along but they had never ‘SEEN’ it. It’s the moment when suddenly old Eli the priest realizes that the voice that the child Samuel keeps hearing is the voice of the Lord calling him. It’s the moment that Samuel hears the voice a third time and says, “Speak, for your servant listens.”

It’s ‘EPIPHANY’ moment when a man named Nathanael, who hasn’t been able to process this stranger from Nazareth, and then suddenly the ‘LIGHT GOES ON,’ “Rabbi, you are the Son of God! You are the King of Israel!”

And suddenly the light goes on and THEY GET IT and their eyes fill with tears and they say ‘I NEVER REALIZED…,’ ‘I SAW IT THAT WAY,’ and their pastor says, “I forgive you all of your sins,” now “glorify God in your body.” THAT’S EPIPHANY.

Have you ever had an ‘Epiphany’? Ever had one of those ‘epiphany moments’ something ‘CLICKED,’ and the light went on and suddenly you see what’s been there and been true all along but you never saw it?

And now, your eyes are opened and it’s ‘Oh My God’. “I never realized what really happened in my baptism.” “I’ve eaten the bread and drank the wine a thousand times but I never saw the body and blood of my Lord like this before.” “I hear those words every Sunday, ‘I forgive you all of your sins,’ but I never realized that it was Jesus speaking them to me.”

EPIPHANY – ‘Bright light’ shining, shattering the darkness, revealing what has been there all along but we never knew it, never saw it, never believed it.

Can you even begin to imagine what heaven is going to be like – when everything that’s been hidden is revealed, and suddenly, “in an instant, in a twinkling of an eye,” as Paul puts it,
 we see just how near Christ has been to us ALL THROUGHOUT OUR LIVES,
 and how many times He delivered me from danger and evil,
 and every mouthful of food I’ve ever eaten I see that it was His hand feeding it to me,
 and every blessing that I took so for granted had been carefully chosen and prepared just for me by Him,
 and I never realized, I never saw it,
 but if I had, oh, what a difference it would have made,
 what a different life I would have lived,
 what was I so worried about?
 What security,
 what courage
 what peace I would have had.

For some, the light goes on easier than it does for others – don’t ask me why. We all know people who remain in the dark and we scratch our head and say – ‘can’t you see?’ ‘Don’t you get it?’ AND WE PRAY FOR AN ‘EPIPHANY’ so that they may see what’s right in front of them.

And some who used to ‘get it’ no longer do. AND WE PRAY FOR AN ‘EPIPHANY’ that they might see once again.

And some who think they’re already ‘enlightened’ only ‘see’ what they want to ‘see’ and fail to see, or refuse to ‘see’ Jesus in their neighbor – and if only they had seen Jesus they would have certainly been more generous than they were, AND WE PRAY FOR AN ‘EPIPHANY.’

Philip had his ‘epiphany’ when Jesus said, “follow me.” That’s all it took. For Nathanael, it’s not so easy. “Philip found Nathanael and said to him, ‘We have found him of whom Moses in the Law and also the prophets wrote, Jesus of Nazareth, the son of Joseph.”

Nathanael responds with the kind of resistance that any true skeptic would be proud of. “Can anything good come out of Nazareth?” Nathanael has searched the Scriptures. He knows his bible. It’s not that he has anything against Nazareth or Nazarenes, but as far as he can tell, he can’t recall a single passage in the Bible that says anything about the Messiah coming from Nazareth. And he’s right.
“Philip said to him, ‘come and see.’” That’s “evangelism” folks. It doesn’t take big programs or lots of special training. It’s not nearly as hard or as threatening as we sometimes make it out to be. We don’t need to be able to answer every question or objection. Just extend the invitation to “come and see.” Nathanael is inviting his dear friend to ‘an Epiphany.’ “Come and see.”

Sometime later, Jesus will come to a well in Samaria where a woman is drawing water and He asks her for a drink. And this poor woman wants to argue with this pathetic Palestinian. But He tells her stuff about her life that there’s no way he could know – unless – He is the Christ. AND IT’S HER ‘EPIPHANY.’

And what does she do? She dashes off to tell her neighbors, “COME AND SEE…” “Come and see a man who told me all that I ever did…” And it’s like they’ve just been waiting for someone to ask. And they go and THEY SEE. And when they come back, they say to her, “It is no longer because of what you said that we believe, for we have heard for ourselves and we know that this is indeed the Savior of the world.” (John 4) IT’S THEIR EPIPHANY.

“Philip said to Nathanael, ‘come and see.’” And Nathanael said, ‘okay.’ “Jesus saw Nathanael coming toward Him and said of him, ‘behold, an Israelite in whom there is no deceit!’”

Jesus had known Nathanael long before Nathanael ever met Jesus. In fact, even before his friend Philip had told him about Jesus of Nazareth, Jesus had already seen Nathanael sitting under a fig tree. And not only does Jesus know Nathanael’s location, He also knows Nathanael’s character – “an Israelite in whom there is no deceit.”

That sounds like a compliment, and it is. ‘Deceit’ is nothing to be proud of. In the Old Testament, the master of ‘deceit’ is Jacob. Jacob ‘deceives’ his father Isaac AND his brother Esau. Later on, God gives Jacob a new name – “you shall no longer be called Jacob, but Israel,” which means, “one who wrestles or struggles against God.”
Nathanael is an Israelite in whom there is no deceit. And what suddenly occurs to Nathanael is that Jesus seems to know a lot about him for having never met him before.

Nathanael’s amazement sounds like the Psalmists amazement that we heard just a few minutes ago:
O LORD, you have searched me and known me!
You know when I sit down and when I rise up;
you discern my thoughts from afar.
You search out my path and my lying down and are acquainted with all my ways.
Even before a word is on my tongue, behold, O LORD, you know it altogether.
Such knowledge is too wonderful for me; it is high; I cannot attain it.
(Psalm 139)

“Nathanael answered, ‘Rabbi, you are the Son of God! You are the King of Israel.” IT’S NATHANEL’S EPIPHANY!

Even Jesus seems a bit surprised by Nathaniel’s confession. “Because I said to you, ‘I saw you under the fig tree do you believe?

Jesus said, “I saw you…” And Nathanael’s eyes were opened and HE SEES “Son of God” and “King of Israel” in this One whom he had previously SEEN nothing but a ‘no good’ Nazarene.

And to this sight, Jesus adds even more sight. “You will see greater things than these. Truly, truly I say to you, you will see heaven opened and the angels of God ascending and descending on the Son of Man.”

Nathanael’s epiphany was just his ‘LITTLE EPIPHANY.’ Jesus had a much bigger epiphany in store for him. “You will see greater things than these.” Which means, “you haven’t seen anything yet.”

Our Lord has a much bigger epiphany in store for us too. We who have had our little epiphany in Holy Baptism and Holy Communion and Holy Absolution and who confess, “You are the Son of God! You are the King of Israel,” will also “see greater things than these.”

It is Jesus Himself who prays for our great ‘epiphany.’ “Father, I desire that they also, whom you have given me, may be with me where I am, TO SEE MY GLORY that you have given me because you loved me before the foundation of the world.” (John 17:24)

We “will see heaven opened.” And the One who has been hidden under water and bread and wine and word, WE WILL SEE in all His glory. St. Paul reminds us all that the great epiphany awaits us. “For now we see in a mirror dimly, but then face to face. Now I know in part; then I shall know fully, even as I have been fully known.” (1 Cor. 13:12).

Every question will be answered. Every doubt, resolved. Every sorrow swallowed up in joy.

Let us cling tightly to the ‘little epiphany’ that we have every time we recall our Baptism, and hear His Word and eat His Supper – until “see greater things than these.”