Posted on February 5, 2018 by Lutheran Church of the Resurrection 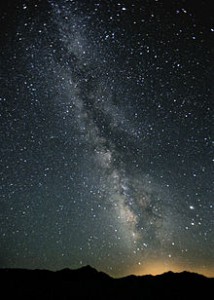 As we flew from our Old Testament reading to our Gospel reading this morning you may well have experienced a sudden drop in cabin pressure. And I wouldn’t be surprise if your ears didn’t pop. Isaiah had us flying so high we were looking down on the stars and planets. And then Mark brought us all the way down to Peter and Andrew’s house and we were looking down on Peter’s mother-in-law, lying in her bed. So just in case your ears are still stopped up so that you can’t hear right, let’s go back up with Isaiah and make a more gradual decent to Mark.

Our Old Testament reading, the prophet Isaiah is preaching to those who think that God is so small that He can actually fit in one of their little handmade idols that sit on a table or fit into their pocket. We can almost picture the prophet grabbing them by the shoulders and shaking some sense into them. “Do you not know? Do you not hear? Has it not been told to you from the beginning? Have you not understood from the foundations of the earth?”

The God whom you think you’ve got confined in your stupid little statue is “he who sits above the circle of the earth…” And suddenly we’re up in the stratosphere where you and I can’t breathe without the divine oxygen of the Holy Spirit. “The Most High God” looks down on the “circle of the earth” that divides the northern and southern hemispheres. And He sees both the North Pole and the South Pole and those for whom it is day and those for whom it is night, ALL AT THE SAME TIME.

We grasshoppers and dust particles look up into the sky and on a clear night we can see the stars in our own galaxy and maybe even, on a clear night, a distant planet or two. And we launch our space stations and telescopes into OUTER SPACE to try to see even farther and maybe, just maybe, CATCH A GLIMPSE WHERE GOD DWELLS.

But God, “stretches out the heavens like a curtain and spreads them out like a tent to dwell in.” What we call ‘outer space’ and measure in ‘light years,’ is for God, just a curtain. The Hebrew word here is “gauze.” It’s so thin He sees right through it. It’s so light and sheer that when He breathes, “the heavens shake.” God forbid that God should ever sneeze.

The heavenly fortress that surrounds us is for Him just a tent that He has pitched, something temporary for us to live under until He comes again TO BREAK CAMP AND ROLL THE WHOLE THING UP.

What Isaiah wants his congregation to understand, (and we are his congregation), is that it’s all a matter of perspective – and we’ve got the perspective all wrong. We make “the most High God” so small that he can fit into our pocket so we carry Him around with us to bring us ‘good luck.’ And we make science and technology and politics and politicians so big – and we put our hope and trust in them to protect us and save us.

So Isaiah wants to fix our faulty perspective. “It is He who brings princes to nothing, and makes the rulers of the earth as emptiness. Scarcely are they planted, scarcely sown, scarcely has their stem taken root in the earth, when He blows on them, and they whither, and the tempest carries them off like stubble.”

“So get your perspective right. You’re making what is small – large and what is larger than the entire universe – so small.” Pointing to the stars in the sky, the prophet says, “Lift up your eyes on high and see: who created these?” “Do you not know? Has it not been told to you from the beginning?” “Have you not understood from the foundations of the earth?”

And the answer is, ‘yes, we do know, because it HAS been told to us. Moses told us that in the beginning, on the first day of creation, ‘God said, let there be light and there was light.’ And then on the fourth day He gathered that light and put it into the stars that He made and said, “Let there be lights in the expanse of the sky to separate the day from the night and to give light to the earth.”

And we heard the Psalmist remind us this morning that, “He determined the number of the stars; and gave to all of them their names.” (Ps.147:4).

This kind of stargazing makes us think of the original stargazer, father Abraham. One night when the sky was crystal clear, God told Abraham to lift up his eyes and “look toward heaven and number the stars if you are able to number them.” (Gen. 15:5) And Abraham must have said, ‘I can’t even begin to number them there are so many.’ And God said to Abraham, “So shall your offspring be.”

But the Psalmist presses our perspective even further saying that it’s not just a matter of numbers and counting. Giving out numbers is what you do with prisoners and people waiting at the deli counter. HE GAVE EACH STAR A NAME. No two stars named the same. And every night since the 4th night of the world, He brings each and every one of them out, calling each by name, like a shepherd calls His sheep. He knows each one BY NAME and each star knows the sound of his voice and “not one is missing.”

What we’re doing here is what’s called, “1st Article Theology,” as in “I believe in God the Father almighty, maker of heaven and earth.” This is where you begin with God to keep things in their proper perspective. This is the God of divine attributes like ‘omnipotent,’ and ‘omniscient,’ and ‘omnipresent,’ and ‘immutable.’ He’s the God who is UP THERE, beyond our reach and our searching out. He is the holy God, the Most High God.

All of this “1st Article” theology is good and it’s critically important, especially for people like you and me who are prone to exaggerating our own greatness and UNDERSTATING God’s ability to take good care of the stars and planets and us grasshoppers who live on this planet named, ‘earth.’

But if “1st Article” theology is ALL YOU HAVE, if ALL YOU KNOW ABOUT GOD is that He “sits above the circle of the earth…” it’s hard to have much of a relationship with a God that high and far off. And you’re always going to wonder if He really sees ME and knows ME and cares about a little grasshopper like ME.

And those ‘wonders’ will one day GRADUATE WITH ADVANCED DEGREES in ‘doubting’. And you’ll start looking for some CONNECTION to the ‘divine’ by carving little idols that fit in your pocket and making those civil rulers and authorities into your gods.

Israel had a graduate degree in 1st Article theology. And here’s what their higher learning got them. “Why do you say, O Jacob, and speak, O Israel, ‘My way is hidden from the Lord, and my right is disregarded by my God?”

Jacob says, “I know that God is high and far away and busy taking care of the stars. What I don’t know is if seems me or cares about little old me, all the way down here?” “My way is hidden from the Lord.” Or maybe Jacob, is more devious than that – and since God is so high, Jacob says, “my way is hidden from the Lord” and He’ll never notice if I sin.”

Israel says that God is so preoccupied with running the universe, does He care about justice for the oppressed – those who can’t defend themselves against the bullies. “My right is disregarded by my God.”

Only Christianity has something meaningful to say to everyone who wonders if the God who “sits above the circle of the earth” and manages the “stars in the sky” knows or cares what’s going on the lives of grasshoppers and dust particles like us.

Every other religion EXCEPT FOR ONE, is all about giving out instructions and rules and programs to follow to make your way UP to where God is.

And sometimes, when it’s not careful, even that ONE EXCEPTION falls into the same focus on UPWARD STRIVING as all the other religions. How many of us can remember singing that old VBS song that taught us to “Climb, climb up sunshine mountain, heavenly breezes blow. Climb, climb up sunshine mountain, face all aglow”? And then for older and more advanced climbers it’s a steady dose of expectations and demands. And the higher you go the further the bar keeps moving – up and up and up – until you crash.

Only the Christian can say, “do you not known, have you not heard” that THE MOST HIGH GOD “so loved the world that He sent His only Son,” “who made Himself nothing, taking the form of a servant, being born in the likeness of men.” (Phil.2:7-8).

There was a time in the life of the Christian Church, that when the congregation got to that part in the SECOND ARTICLE OF THE CREED, “I believe in Jesus Christ, very God of very God,” it would pause and everyone would bow their head as they said, “who for us men and for our salvation, CAME DOWN FROM HEAVEN…”

The God who sits above the circle of the earth CAME DOWN FROM HEAVEN, and went to Peter and Andrew’s house where Peter’s mother-in-law was ill. AND THE ONE WHO CREATED THE STARS AND KNOWS THEIR NUMBER AND EACH ONE ITS NAME, “took her by the hand and lifted her up, and the fever left her…” Her ‘way’ was NOT hidden from the Lord. And her ‘right’ was NOT disregarded by her God. And neither is yours.

He who cools the burning fever also “heals the brokenhearted and binds up their wounds,” and “gives power to the faint, and to him who has NO might he increases strength” – NOT FROM FAR OFF AND HIGH ABOVE, but by coming down, all the way down to you.

Listen, there is no depth to which you can go that is too deep that the “very God of very God” will not, has not, COME DOWN FROM HEAVEN to take care of you. HE CREATED YOU. HE KNOWS YOUR NAME. Your way is NOT HIDDEN from Him. “I am with you always.”

Today, He comes into this house today to take you by the hand that He may place His body, crucified unto death for you, into it. And that He may touch your lips with His blood, shed on the cross for the remission of all your sins.

So we can quit all of the striving to climb up to God. This is what makes ‘even youths, faint and weary, and young men fall exhausted.” GOD HAS COME DOWN to us. And by the sound of His voice, and the touch of His hand, and the power of His blood, He gives “wings like eagles” even to grasshoppers like you and me.

Peter’s mother-in-law ‘immediately’ got up and began to serve. And we get up from this railing and ready to “run and not grow weary, walk and not grow faint” until that day called the LAST DAY comes, when Jesus comes down again, to raise us up to be with Him “above the circle of the earth.”

And if that doesn’t make your ears pop – nothing will.