Posted on March 5, 2018 by Lutheran Church of the Resurrection

“The Passover of the Jews was at hand and Jesus went up to Jerusalem. In the temple, he found those who were selling oxen and sheep and pigeons, and the money-changers sitting there.” 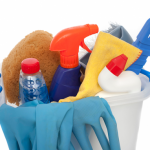 When Jesus went to the Temple, John says, He ‘found’ it to be a real mess.

I’m not sure this is totally fair, but what if, when you came to church this morning to fed and nourished on God’s Word and Sacrament, you ‘found’ that to get from the parking lot to the front door you had to go through a maze of merchants selling all kinds of stuff. And then, once inside the doors, you had to literally walk sideways for all of the vendor displays, and that long line of folks crowding in on the Starbucks coffee station – ‘make that a tall, non-fat, latte with caramel drizzle, please.’ And then when you finally come through the doors to find a seat, you discover that half the pews in the sanctuary had been removed to make room for the LWML ‘left-overs from the craft fair blowout sale.’ All while a boom box was playing praise hymns to give it all a feeling of spirituality.

Anyway, that’s the way I picture what Jesus ‘found’ when He went to the Temple, just before Passover.

Jesus doesn’t look for what is in good order or wait until we exercise proper worship before He is willing to enter and be present. He knows the deplorable condition of His Father’s house, and He enters it to make it clean.

“And making a whip of cords, he drove them all out of the temple, with the sheep and oxen. And he poured out the coins of the money-changers and overturned their tables. And he told those who sold the pigeons, ‘Take these away; do not make my Father’s house a house of trade.”

Try to picture the scene.

We may not be used to seeing such violence from our Lord. It looks like something’s snapped and He’s lost His cool and He’s on a rampage, and He’s armed with a whip of cords. We’re not used to seeing GOD so ‘hoppin’ mad’ like we see Him here.

And maybe that bothers us. Maybe we’re not so sure we want to see so much ‘ZEAL’ from God. Maybe we prefer a gentler Jesus who remains emotionally detached from the deplorable conditions of His Father’s house – ‘you know boys will be boys.’ Because if He gets this ‘WORKED UP’ about what the Jews were doing in the Temple in Jerusalem, how will He react when He sees the mess that I’ve made of His Temple in me?

Or have you forgotten that you are the temple of God? Twice we are reminded by St. Paul, “Do you not know that YOU ARE GOD’S TEMPLE and that God’s Spirit dwells in you?” (1 Corinthians 3:16) “Or do you not know that YOUR BODY IS A TEMPLE OF THE HOLY SPIRIT within you, whom you have from God?” (1 Cor. 6:19)

If He didn’t care much about you one way or the other, He’d say, ‘boys will be boys.’ I’ll go look for a temple where I’m welcome, where they want me, where everything is neat and in order.’

But of course, He does care about you. He is ‘ZEALOUS’ for you. And that’s why He doesn’t wait for you to clean up your mess and get your house in order.

Jesus entered the house of a sinner like you, and He made you His temple. He made a baptism out of water, and with it, He drove out all of the merchants and distractions and money changers, and all of the false gods. He CLEANSED His temple and made you holy and righteous.

“So the Jews said to Him, ‘what sign do you show us for doing these things?’”

What a strange reaction. You’d think they’d be happy that someone came and did all the dirty work – FOR FREE. But we shouldn’t be surprised. It’s our reaction to Jesus’ housecleaning in us too.

We don’t like this ‘zealous’ Jesus who barges into our life and turns things upside down and demands that this and that has to go. To paraphrase the question, “the Jews said to Him, ‘who do you think you are coming into OUR TEMPLE like this?’ We’ve got a lot invested and a lot at stake here. And frankly, we may not be in TOTAL control of things, but we’d at least like to have some say in the matter.’

This kind of ‘takeover’ by God is always unwelcome because He doesn’t ask our permission or wait for our decision. When He comes into HIS Temple and cleans house, its death to us and to our ‘free will’ and ‘independence.’ He takes a whip to it all. And He forces us to see how ATTACHED to these things that get in the WAY, of Him who is the WAY, from having His WAY with us.

And so, in our rebellion against Him for barging in like He’s done, no sooner does He clean His temple than we start filling it right back up again with all the same obstacles and distractions and false gods. And every day is a returning to our Baptism, and a dying to sin, and a starting all over again.

I’ve sometimes wondered whether the 10 Commandments were on display anywhere in the Temple in Jerusalem. I know that we may be bothered by the fact that the Supreme Court forbids the 10 Commandments from being displayed in the courtrooms and classrooms of our nation. Because after all, the 10 Commandments are right, and what is right is good, and our judges and jurors and students should be reminded to live by them.

And if they were, I wonder if anyone ever actually looked at them? And if they were, I bet you they got covered up, at least for the week of the Passover while the Temple was converted into a market. “You shall have no other gods. You shall not take the name of the Lord your God in vain. You shall honor the Sabbath day by keeping it holy.”

Because if the 10 Commandments HAD been on display in the Temple, and if the Jews HAD read them and taken them seriously, they would have put them to so much shame that it would never have been necessary for Jesus to take up His whip and exercise His zeal.

The Law exposes the false gods and the distractions and outside vendors that we have crowded our lives – God’s temple with. And because the Law doesn’t have the power to empower a person to actually do what it commands and clean up our lives before God, the Law always makes us feel guilty and it always condemns us.

And who likes to be put to shame and condemned? And so, even if the 10 Commandments were on display in the Temple, I suspect they got covered up. Or maybe they were hung in a back closet somewhere that no one ever had to actually look at them.

But it is Jesus who has the final word in this. “Jesus answered them, ‘Destroy this temple, and in three days I will raise it up.” And John is careful to inform us that Jesus is not talking about the building in Jerusalem as the Jews assumed, “but he was speaking about the temple of His body.”

Thirty of those coins that spilled across the floor when He overturned the tables would be used to purchase His betrayer. The whip that He took to the merchants and money-changers would be taken to Him. He would become the sacrificial offering for sin in place of the oxen and the sheep and the pigeons that He drove from the Temple.

For He says, “I the Lord your God am a jealous God.” He is filled with great ‘JEALOUSY’ and ‘ZEAL’ and ‘PASSION’ for YOU, that you would be ‘clean’ and that YOU may be MY PEOPLE and I may be YOUR GOD.

In His ‘zeal,’ God has visited the iniquity of the fathers to the third and the fourth and to every generation on His Son – in your place and for your good. And on the 3rd day, it was all clean.

And the 10 Commandments are hung in you and they are on display in you and you dare not take them down or try to cover them up. But you must also know that God has also hung a cross right next to those 10 Commandments – a crucifix. And you must never take it down or cover it up either.

For as those 10 Commandments serve to reveal your sin and show you your guilt, that cross serves to reveal your forgiveness and show you how loved by God you are. The Law has no power to empower us to do what it commands. But the cross of our Lord, is the “power of God to us who are being saved.” (1 Corinthians 1:18.)