Posted on March 12, 2018 by Lutheran Church of the Resurrection 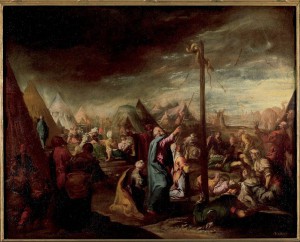 Anyone who has had to live out of a suitcase for more than a couple of days knows how fast it gets old. Traveling is exciting, but after a while, you’d gladly trade the nice hotels and restaurant food for your own bed and a home cooked meal. Nothing beats home sweet home.

Likewise, no one enjoys moving. Moving is one of the most stressful things in life, second only to divorce. But imagine that you’ve sold the house, packed the truck and set out for your new home. And a month later, you’re still driving around looking for it. And two months later you’re still on the road and you don’t know if you’re getting any closer to where you’re headed. And in fact, some of the scenery is starting to look a bit familiar.

When we get to Numbers 21, Israel has been on the road, moving to their new home, FOR 38 YEARS. They moved out of their old place in Egypt because things got really bad there. They’re headed to a new home – a place that the DIVINE REALATOR described in ‘gastronomic terms’ – “a land flowing with milk and honey.”

We read, “From Mount Hor they set out by the way of the Red Sea, to go around the land of Edom.” We can’t appreciate the situation until we appreciate the significance of the geographical details that Moses just gave us.

Israel had gotten as far as the outskirts of the Promised Land. Moses sent spies to check it out and bring back a report. And when the spies returned, all but two of them said, ‘It’s great place and the food is incredible. But the people who are living there are REALLY BIG and they look REALLY STRONG and we don’t think we can take them.’ And against the objection of Joshua, all the people said, ‘let’s turn back.’

And all this happened while the LORD GOD ALMIGHTY was standing right there in front of them in the pillar of cloud by day and the pillar of fire by night, with HIS MIGHTY HAND AND HIS OUTSTRETCHED arm, ready to clear the way for them just as He did through the Red Sea, saying, “Hello. I AM WITH YOU.”

So when Moses says, “they set out by way of the Red Sea,” we realize that that’s where this whole journey began – at the Red Sea, and after 38 years of moving, they’re right where they began.

That’s what ‘impatience’ is. ‘Impatience’ is shrinkage of the soul. And impatience leads to complaining. It takes less and less BEFORE YOU’RE READY TO EXPLODE. “And the people became impatient on the way.” But the question is, who were they ‘impatient’ with? God or themselves? If they had trusted in God, they’d be 36 years settled into their new home – flowing with milk and honey.

“But the people spoke against God and against Moses. ‘Why have you… second person plural… brought us up out of Egypt to die in the wilderness? Their complaint is leveled against God and Moses.

Can we even begin to even imagine how differently this whole account might have read if only they had gotten impatient with themselves? If only the text read, “And the people spoke to God and to Moses – against themselves – ‘why have we been so blind and so deaf and so stupid? Why don’t we ever learn to trust in God’s Word and Promise? Why do we blame Him for our doubt and sin? What short-souled people we are.”

But instead of speaking against themselves, they blame God and His servant Moses for their SHORT SOUL. “There is NO FOOD and no water and we loathe this worthless food.” So, which is it – “no food” or “worthless food”? It’s like when the kids go to the fridge that’s packed with food, and after standing there with the door open for five minutes, complain, ‘there’s nothing in this house to eat.’

It’s not that they were hungry or thirsty. They just didn’t like the food that God was providing for them day in and day out. They “loathed this worthless food.”

It shouldn’t be too hard for us to find ourselves in this protest movement. How quickly we become “impatient” – ‘short-souled’ – and “speak against God” when things don’t go the way we want them to go OR whey things longer than we think they should.
• How easily do today’s BLESSINGS from God become expectations that we’re thoroughly board with?
• How quickly do we become IMPATIENT with God when He doesn’t satisfy our latest craving?
• How often has He led us right to the brink of His blessing but we have turned back in fear because we didn’t trust His promise or forgot He was leading the way?

If only we would learn to trust in His Word and Promise and GIVE THANKS FOR ALL HIS GOODNESS, and learn to SPEAK AGAINST OURSELVES in our impatience. How much different things might go.

Thankfully, our God is not ‘short-souled’ like we are. Peter reminds us that for all of OUR IMPATIENCE with God, the Lord “is patient toward you, not wishing that any should perish but that all should reach repentance.” (2 Pet. 3:9)

And that is how we are to hear what comes next. “Then the Lord sent fiery serpents among the people and they bit the people, so that many people of Israel died.”

The Lord SENT them. He didn’t LET them. He SENT them. He SENT a snake stampede on His own people. And these fiery serpents became His servants discipline and for training in righteousness. Contrary to a lot of popular opinion, this is how the Lord our God works. In a paradoxical arrangement of words, HE KILLS TO MAKE ALIVE. He SENT the fiery serpents, “not wishing that any should perish but that all should reach repentance.”

It wasn’t that these “fiery serpents” were on fire, but when they dunk their fangs into Israelite flesh, it burned like fire. HE SENDS HELL TO YOU TO BRING YOU TO HEAVEN.

“And the people came to Moses and said, ‘We have sinned, for we have spoken against the Lord and against you. Pray to the Lord, that he take away the serpents from us.”

The ‘fiery serpents’ did their job. In the hands of a loving God, suffering and death accomplished their good and holy purpose. “We have sinned.” That’s confession. That’s repentance. That’s a complete turn-around – from SPEAKING AGAINST God to SPEAKING AGAINST themselves.

And then, with all boldness and confidence that is born from an absurd hope that God might actually be at work FOR ME in the pain and suffering and even death that HE SENDS to me, they ask Moses to SPEAK FOR THEM. “Pray to the Lord, that He might take away the serpents from us.”

“So Moses prayed FOR the people.” Moses SPEAKS FOR the people who SPOKE AGAINST he and God. There is more grace in that little phrase than our ‘short souls’ have room for. But it is this grace that enlarges the soul and gives us the HOLY GIFT OF PATIENCE.

Jesus responds to Nicodemus, ‘if you want to know something about Me, here is your answer,’ “As Moses lifted up the serpent in the wilderness, so much the Son of Man be lifted up, that whoever believes in Him may have eternal life.”

As Moses hung the likeness of a fiery serpent on a pole, God hung the likeness of our sinful flesh on the cross. “By sending His own Son IN THE LIKENESS OF SINFUL FLESH AND FOR SIN, He condemned sin in the flesh, IN ORDER THAT the righteous requirement of the law might be fulfilled in us.” (Romans 8:3)

“He Himself BORE OUR SIN IN HIS BODY ON THE TREE, that we might die to sin and live to righteousness. By His wounds you have been healed.” (1 Peter 2:24) He has put His lips to the serpent’s bite and sucked the poisonous venom out of you. He tastes hell-fire so that you would not have to taste it. He is burning up so that you might never burn.

And notice, please notice, NOT A WORD OF COMPLAINT FROM HIS LIPS! He SPEAKS FOR YOU through it all. “Father, forgive them…” He is the NEW ISRAEL – not ‘short souled.’ But even in His ‘hunger and thirst,’ He trusts everything to God. “Father, into Your hands I commend my spirit.”

The One who became sin and death for us has become forgiveness and life for us. To all who complain about the miserable food that God gives us on this journey, He gives His very body to eat and His very blood to drink – the true ANTIVENOM for all of your sin – a foretaste of the milk and honey to come.

Our crucified and risen and ascended Lord, Jesus Christ, is constantly speaking FOR US to the Father. “For we have an advocate with the Father, Jesus Christ, the righteous.” (1 Jn.2:1). Your sins cry out to God AGAINST YOU. But “the Holy Spirit Himself INTERCEEDS for us with groanings too deep for words.” (Rom.8:26,34)

The beloved Son says to His Father, “Father, see my back where they flogged me without mercy. See the wounds they inflicted on my hands and feet with the nails. See the place where they stabbed the sword into my side and pierced my heart. See the scars on my head from the thorns they pressed down hard on me. These are the marks of Our love, Father. They speak FOR THEM with groanings too deep for words.”

And the Father replies, “Yes, My Son, it is for this that I sent You into the world, that they might not perish but have eternal life.”

As we said, this episode occurs after Israel has been on their journey for 38 years. If it’s hard for us to understand Israel’s impatience and complaining, it’s only because we know more than they did. We already know that the journey lasts 40 years. And we see how close to the destination they are. But they don’t see it.

It’s like that for us too. We’re all aliens and foreigners in this world. Heaven is our home. And the journey sometimes seems long and never ending and we can’t see how close to the destination we are. God sees it, but we can’t see it.

Listen to Moses, “whoever SEES IT shall live.” Listen to Jesus, “whoever believes in Him will have eternal life.”