Posted on March 19, 2018 by Lutheran Church of the Resurrection 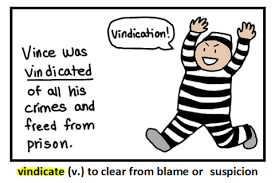 Today, we come to the fifth Sunday in the season of Lent – which, if you like things neatly counted out and ordered is a fine thing to call it – but it’s not nearly as interesting as “Judica Sunday,” which the church has called this week for a whole lot longer. “Judica” is from the Latin, “iudicare” which means, ‘to judge.’ The ‘name’ for this Sunday is taken from the first verse of the Introit appointed for 5th Sunday in Lent – Psalm 43:1 – “Vindicate me, O God, and defend my cause against an ungodly people, from the deceitful and unjust man deliver me!” (Ps.43:1)

The opposite of “vindication” is “condemnation.” “Condemnation” is the ‘judgement’ that declares that you are indeed guilty of the charges that have been brought against you.

And as we ALL well know, these kinds of ‘trials’ take place in many settings other than civil courtrooms. They happen on the playground, and in the classroom, and at the office, and in the neighborhood – and even, maybe most frequently – right in our own homes.

Accusations are made, and with that, a trial begins. Evidence is gathered and presented. Some of it is gossip, some opinion, some is just malicious rumor. But it’s all presented as though it were fact. Sometimes the internet and the media are employed to persuade the jury. And men and women, boys and girls, children, husbands and wives, are ‘judged,’ and reputations are threatened, and friendships are questioned, and families are broken – long before the trial is over. And the accused cry, “vindicate me, O God, and defend my cause against an ungodly people, from the deceitful and unjust man deliver me!” (Ps.43:1)

It happens all the time and everywhere. Some of these ‘trials’ last no more than a few minutes and then they’re over. Sometime go on for years and years. Sometimes we’re the one who makes the accusations and plays the judge and jury. Sometimes it seems as though we’re constantly being ‘accused’ and ‘tried’ and we’re always having to defend ourselves and prove ourselves.

But always we pray, “Vindicate me, O God, and defend my cause against an ungodly people, from the deceitful and unjust man deliver me!” (Ps.43:1)

We ALL ‘judgement’ other people ALL the time. We are all very ‘JUDGMENTAL.’ But how many of our ‘judgments’ are ‘just’? How often do we judge with ‘justice’? We have our ‘prejudices’ and our ‘jealousies’ and our ‘politics’ and our ‘sinful nature.’ There are things we don’t see and things we don’t want to see and things we refuse to see. And we run our ‘judgements’ through these filters like hot water through a tea bag and it comes out ‘colored,’ and ‘tainted.’

The question is, how will WE stand in “THE JUDGEMENT,” when the God of ‘justice’ VINDICATES those, AGAINST WHOM WE HAVE MADE OUR JUDGMENTS AND ACCUSATIONS? Their ‘vindication’ will be or ‘condemnation.’ For the Law is, “you shall not bear false witness against your neighbor.”

And so the prophet declares, “who can endure the day of his coming, and who can stand when he appears? For he is like a refiner’s fire and like fullers’ soap.” (Malachi 3:2)

Who is the “deceitful and unjust man?” “You are the man.” Which is, without a doubt, why Jesus sternly warns, “judge not lest you be judged.” (Matthew 7:1)

So then, who is this One who prays for “judicare”? “Vindicate me, O God…” WHO DARES TO PRAY SUCH A PRAYER AS THIS? Who dares to pray, “Judge me, O LORD, according to my righteousness and according to the integrity that is in me.” – Psalm 7:8. Who dares to pray, “Vindicate me, O LORD, for I have walked in my integrity, and I have trusted in the LORD without wavering.” – Psalm 26:1.

Not you and not me, that’s for sure. In fact, woe to you and woe to me if we think that when we stand before the God of justice based on “my righteousness and the integrity that is in me.”

No, there is only One who prays like this, and in so praying, prays rightly, ‘orthodox.’ And that is Jesus Christ. He is “the man.”

They ask Him questions solely to trap Him. A close friend takes bribes to betray Him, another denies knowing Him. He is arrested Him and bound and tried by corrupt judges in corrupt courts, who desire not justice but only their own selfish interests. One judge has Him brutally flogged simply to please the crowds. But the crowds declare their guilty verdict and will settle for nothing less than the most shameful punishment available – “Crucify Him. Crucify Him.”

Just as He knew they would and just as He said they would. “And the Son of Man will be delivered over to the chief priests and the scribes, and they will condemn him to death and deliver him over to the Gentiles. And they will mock him and spit on him, and flog him and kill him.”

He is mankind’s only truly ‘just’ Man. Denying Peter later testifies, “He committed no sin, neither was deceit found in his mouth. When he was reviled, he did not revile in return; when he suffered, he did not threaten, but continued entrusting himself to him who judges justly.” (2 Peter 2:22)

Which means that He is also mankind’s only truly ‘falsely accused’ and ‘falsely condemned’ Man. For haven’t we all committed sin which makes us all guilty? And which of us could even begin to say that there is no deceit to be found in our mouth?

And when we are ‘justly’ reviled for our sin who has not reviled in return, not out of justice but out of pride? And when we suffer, whether it be justly or unjustly, do we not threaten to get even rather than entrusting ourselves to Him who judges justly?

No one has more right to be INDIGNANT than He does. But He will not VINDICATE Himself. He “continued entrusting himself to him who judges justly.”

Which is just what He is doing when we hear Mark tell us, “And they were on the road, going up to Jerusalem, and Jesus was walking ahead of them.” He is going to His trial to be mocked, spit on, flogged and killed – four verbs that send chills down our spine – if we have one.

So as He “walks ahead of them,” is it too hard for us to imagine that He is praying, “Vindicate me, O God, and defend my cause against an ungodly people, from the deceitful and unjust man deliver me!” (Ps.43:1) He is going to be VINDICATED, for He knows that “after three days, He will rise.”

The time has come for us to ask, of what is our Lord vindicated? Is it His Name, that was slandered and taken in vain and that continues to be abused and misrepresented in the worst ways? For after all, a person’s name stands for the person himself.

And we could go on like this for a long time. But on this ‘Judica’ Sunday, our attention is directed to this mission that He is on as He goes up to Jerusalem. His mission is to establish the NEW COVENANT, by which men and women will no longer pay a ransom to God for their sin in sheep and goats, over and over again as in the Old Covenant. But now, one, holy, innocent and righteous Lamb of God would be sacrificed for the sin of the whole world – once, for all. He came into this world to “give His life as a ransom for many.”

Under the OLD COVENANT, the RANSOM PRICE required for a soul had also to be paid in cash. In Exodus, chapter 30, we read that God told Moses to “take a census of the people of Israel, then each shall give a ransom for his life to the Lord. Each one who is numbered in the census shall give this: half a shekel according to the sanctuary shekel.” (Ex.30:12-13).

That seems awfully cheap. Half a shekel? Is that all my life is worth to God? No. Of course not. For “you were ransomed from the futile ways inherited from your forefathers, not with perishable things such as silver and gold, but with the precious blood of Christ, like that of a lamb without blemish or spot.” (1 Peter 1:18) Jesus came into this world to “give His life as a ransom for many.”

The judgment that He received from His Father, who DOES NOT DELIVER HIM FROM THE DECEITFUL AND UNJUST MAN, is FOR YOU. The ‘injustice’ carried out upon Him, IS YOUR ‘JUSTIFICATION’ because it is your deceit and injustice that He is being judged for.

But He has been ‘vindicated.’ Not only because He was raised again on the 3rd day. But also because YOU belong to Him, and YOU bear His holy name, and you call Him saying, MY LORD and MY GOD, and YOU willingly and joyfully strive to live under His authority, “entrusting yourself to Him who judges justly,” firmly believing and not doubting that YOUR judgement before God, has already been carried out on the cross of Him, “who has become the source of eternal salvation to all who obey him.” (Heb. 5:9).

You are His ‘vindication’ along with His one, holy, Christian church here on earth and there in heaven.

In His holy Name, and by His perfect authority, we may now make this prayer our prayer too. “Vindicate me, O God, and defend my cause against an ungodly people, from the deceitful and unjust man deliver me!”

A blessed “Judica Sunday” to you all.