Posted on April 23, 2018 by Lutheran Church of the Resurrection

“I am the good Shepherd. The good shepherd lays down his life for the sheep.” 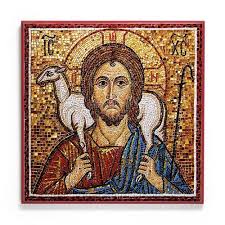 Today our attention is focused on His declaration to us, “I am the good shepherd.”

He is the “GOOD” Shepherd. “GOOD” as in the beginning when God saw what He made by the power of His Word and called it GOOD. “GOOD” as in “tov.” Exactly the way it’s supposed to be. “GOOD” light. “GOOD” dry land and seas. “GOOD” fruit trees bearing fruit and vegetation. “GOOD” stars in the sky. GOOD creatures on the earth. “GOOD” man and GOOD woman. “I am the GOOD Shepherd.” Exactly what a Shepherd is supposed to be.

Shepherds are responsible for doing one thing – taking care of sheep that have been assigned to their care. If a shepherd is given 100 sheep to care for and one, just one, goes astray, they better get out there and look for it until they find it and carry it if they must, all the way back to the fold. Any shepherd who comes in with fewer sheep than he was entrusted with is not a GOOD SHEPHERD.

But He is not a ‘hired hand.’ “The hired hand cares nothing for the sheep.” The hired hand is only interested in the paycheck and his 403B retirement program and whether or not Social Security will still be around when it comes time to for him to collect.

The Good Shepherd is not a ‘hired hand.’ The sheep BELONG to Him. “I know MY OWN, and My own know me, just as the Father knows me and I know the Father.”

It’s so personal really that you could call it ‘INTIMATE’ if you’d like. The famous Old Testament word for ‘intimacy’ between two people is the Hebrew word, “yada” – “to know,” as in, “Adam knew his wife, Eve, and she conceived…” (Gen.4:1).
The Good Shepherd says, “I know my own and my own know me. But then He adds this astounding comparison – just as the Father knows me and I know the Father…” The intimacy of the relationship between God the Father and the Son of God is the suitable comparison of the intimacy between the Good Shepherd and His sheep.

And it is right here that the preacher finds that there are no words to describe what only the angels and archangels and the company of heaven can ponder and penetrate in its glorious fullness. For now, we can only see as through a mirror dimly… but then we shall know fully even as we are fully known. (1Cor. 13:12)

But even now, we can certainly say this much, if anyone would pay such a huge price to save me from the jaws of the wolf from hell, if anyone would NOT SPARE his own life to save mine, I am going to have a very special relationship with that one.

I’m sure we all remember the heroism of pilot, “Sully” Sullenberger who safely landed his plane on the Hudson River and all 155 passengers and crew were saved from what could have been a real disaster. A year later a reunion was held for the passengers and crew of that flight. Captain Sullenberger was present and one at a time, every person hugged him and with flowing tears said, “thank you.” It was the first time that the passengers had met their savior. His saving act created a very special bond with those whom he saved.

The same is true for us only to an infinitely greater degree. What a relationship we have with the Good Shepherd who laid down His life for His sheep, and by His cross, has delivered them – not simply FROM DEATH, but THROUGH DEATH. And He has given them – not simply more life in this world, but ETERNAL LIFE in heaven, where we shall know fully even as we are fully known.

Until then, we live by faith, knowing exactly where the Good Shepherd is leading us, even if we do not know the path. We know the “outcome of our faith – the salvation of our souls.” (1 Peter 1:9) and that He has already accomplished it by “laying down His life” for His sheep and “by taking it up again.” We live with our feet firmly planted in this world even while our heart has already been taken up into the heart of God.

In the meantime, it is not at all uncommon to hear the sheep say both to themselves and to others, “The Lord is my shepherd – therefore, I shall not want. He makes me to lie down in green pastures. He leads me beside still waters. He restores my soul.”

And it’s right about here, as we’ve piled up all of these ‘first person pronouns’ like ‘I’ and “me” and “mine,” that the Good Shepherd interrupts and would remind us that He has laid down His life – not for a few, or even for many – but FOR ALL. And there are some who have not yet heard and therefore do not yet know, ‘whose they are’ and therefore do not know who they are.

“I have other sheep that are not of this fold. I must bring them also, and they will listen to my voice. So there will be one flock, one shepherd.”

In a world that is so full of division and in which there are so many things that separate and divide us, our Lord gives us this wonderfully clear and exciting picture of the perfect unity that He has accomplished “because He has laid down His life and has taken it up again.”

The Good Shepherd gathers all of His sheep no matter how far they have scattered – geographically, linguistically, even doctrinally – and brings them home. He finds the lost sheep and reunites them with all the other lost sheep whom He has searched for and found. He defends and protects His precious flock from all harm and danger – even from the wolf from hell who would devour them.

In our Epistle reading today, we heard the same John who wrote the gospel, write to the sheep saying, “By this we know love, that he laid down His life for us.” The cross of Christ is the definitive testimony that He has stamped on His whole creation from day one – “I LOVE YOU.”

In our baptism, we have been taken up into that love of God such that it is not simply a theory to be tested and tried, but a fact to be trusted and lived out in our daily life. In our baptism, the Holy Spirit has opened our stony cold hearts and set them pumping with life and that breathes faith into our bodies such that we are confident that His “for us” most certainly includes “for me.”

And with that faith and confidence that “the Lord is my shepherd, I shall not want,” John writes to the sheep, “and we ought to lay down our lives for the brothers.” (1John 3:16). It should come as no surprise to us that the sheep of the Good Shepherd come to resemble the Good Shepherd Himself as they listen to His voice.

He who created us in His image, by His cross has restored His image in us. Even as He brings us into the very heart of the Triune God, so brings the very Triune God into our heart that we may bear His image even to the point of laying down our lives for one another.

John identifies one of the primary challenges that we all face in the daily challenge of following our Good Shepherd – materialism – possessions – money. As we all know, these THINGS can get such a hold on us – or maybe more accurately, we can get such a hold on them that it’s hard to let go. John writes to the holy flock of God whose “cup overflows” with all that they need and more saying, “If anyone has the world’s goods and sees his brother in need, yet closes his heart against him how does God’s love abide in him?”

This struggle between the desire to PRESERVE our lives and the apostle’s call to LAY DOWN our lives for the sake of our neighbor, is a daily battle – that may occasionally require bloodshed or even death – but most often comes down to “opening his heart” by being generous in sharing “the world’s goods” with ‘the brother in need.’

Whether “the brother’s need” is physical or spiritual, and it is always both, we who have been blessed with an abundance of ‘the world’s goods’ are called to “lay down our life for the brothers,” as or Good Shepherd has laid down His life for us.

This is a daily struggle and a lifelong battle that we lose far more often than we win. But even here, especially here, we give thanks to God that He does not keep score according to our performance, but the performance of His Son.

Even as we daily look at ourselves in the mirror and shake our heads in disappointment, “we know that we are of the truth and reassure our hearts before Him; for whenever our heart condemns us, God is greater than our heart.” He does not let our hearts have the last word any more than He lets the wolf from hell to have the last word. He will have the last word – “I am the good shepherd.” “I forgive you all of your sins.”

It is as His sheep hear His voice and listen to it, that we are daily born again and transformed and raised from death to life and strive to “love one another in deed and in truth.” For really, what have I got to lose since I have gained even Christ? “For surely goodness and mercy shall follow me all the days of my life, and I shall dwell in the house of the Lord forever.”