Posted on April 16, 2018 by Lutheran Church of the Resurrection 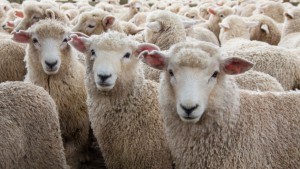 Now, just as He said, the Good Shepherd comes to His dear sheep to calm their fears, announcing the Good News that He wants all His dear sheep to hear. “Peace to you!” He simply wants them to know that He has returned and everything’s going to okay because He is alive and not dead. He is with them. And as long as He is with them, they can live with HIS PEACE – “Peace to you.”

It’s taken me some time to realize this and I’m still working to trust it more fully than I do, but there is great comfort simply in knowing that the resurrected Jesus Christ is alive and present with me. The world doesn’t have to change, my situation doesn’t have to change, the danger may still be just as present as it was, but its’ okay and I can get through this and move forward and actually live, as long as know that the risen Jesus Christ is present with me.

The unbelieving world doesn’t get this. And I’m a part of that unbelieving world and so are you because our faith is always weak and we all have our doubts. Apart from faith in the risen and living and always present Jesus Christ, “peace” for my life is dependent on all of the outward circumstances of my life and this world lining up just right. And what little control over these things we have.

Apart from faith in the risen and living and always present Jesus Christ, our only hope for real and genuine ‘peace’ is if the politicians and the economy and the media and the doctors and our neighbors and friends and our family do what we want them to do – which of course has less chance of ever happening than if someone nailed to a cross has of being alive and present with us three days later.

But faith says, “It’s enough to know that the risen Christ is present with us.” In our prayers for ourselves and for others, we tell Jesus what we would like Him to do for us, but in the end we say, “Thy will be done. Just be with us.”

So, all that Jesus is out to do here is to assure His frightened little flock that He is really alive and He really is present with them. He gives them His peace – “not as the world gives do I give to you – let not your hearts be troubled, neither let them be afraid.” (John 14:27)

He comes right into the room where they’re huddled together in fear and confusion and announces the victory that He has won by His cross. ‘Peace to you.’

But rather than singing as we did, “Christ is arisen from the grave’s dark prison. So let our joy rise full and free; Christ our comfort true will be. Alleluia!” (LSB #459), Luke tells us ‘they were startled and thought they saw a spirit.” You would have thought that He stood among them and said, ‘BOO!” instead of “Peace to you.”

And He said to them, ‘Why are you troubled and why do doubts arise in your hearts?’ I think that we who have heard the Easter story so many times lose sight of just how mind-blowing the whole thing really was for them. When the skeptic or those who are new to the faith hear this and respond, “You expect me to believe this?” they’re probably listening a whole lot closer than we think they are – and maybe more carefully than we are.

So, Jesus finds Himself in a room full of skeptics – His own disciples. And I guess His first disciples can be troubled and have their doubts – so can we.

He doesn’t tell them to go away and come back with they’ve got more faith and less doubt. That’s the opposite of how things work in the Kingdom of God. He has compassion on them and gives them reason to believe AND reason to stop doubting.

He gives them seven proofs that “it is I myself” and not just a ghost or a dream or a hallucination or ‘too good to be true.’ As we look at these proofs of His ‘real presence’ with them, let’s be sure to try to let them have the same effect on us as they had on them – that we too may have His peace.

#1 – See Me
First of all, He gives them VISUAL PROOF. “SEE my hands and my feet, THAT IT IS I MYSELF.” For all who insist that “seeing is believing,” Jesus says, “okay, see for yourself.” He wants them to SEE his hands and feet because they bear the marks of the nails and identify Him as the same one who was crucified.

SEEING is important for this group in particular – because He will send them out into this unbelieving world as “eyewitnesses.” And so He gives them an eyeful.

#2 – Touch Me.
Second, He gives them TANGIBLE proof of His resurrected presence. They think that this must be a ghost. So He counters their doubt saying, “TOUCH ME AND SEE. For a spirit does not have flesh and bones as you see that I have.”

#3 – He eats.
Third, He gives them PHYSICAL proof that He is still FULLY HUMAN. “He said to them, ‘Have you anything to here to eat?’ They gave him a piece of broiled fish and he took it and ate before them.” This is no spiritual eating of spiritual food but real eating of real food which spirits that have no physical body don’t do.

The Good Shepherd stands before His frightened and doubting sheep and gives them VISUAL, TANGIBLE, PHYSICAL proof that it is “It is I Myself” who is in this room with them.

#4 – He speaks.
Fourth, He speaks to them and they hear Him. He gives them AUDITORY proof of His real presence among them. This one becomes the most important proof for us today. We HEAR Him speak to us through His Word. And as we HEAR His Word, His Word creates faith and dispels doubts and we have His peace.

#5 – It Happened As He Told Them It Would
Fifth, after appealing to their senses, He appeals to their minds and gives them rational, reasonable evidence to believe that “it is I Myself.” “Then He said to them, ‘These are my words that I spoke to you while I was still with you.’”

Jesus had made the most unlikely and impossible prediction of His death and resurrection at least three separate times with His disciples. “See, we are going up to Jerusalem, and the Son of Man will be delivered over to the chief priests and the scribes, and they will condemn him to death and deliver him over to the Gentiles. And they will mock him and spit on him, and flog him and kill him. And after three days he will rise.” (Mark 10:33-34).

Why does He do this? Jesus explains, “And now I have told you before it takes place, so that when it does take place you may believe.” (John 14:29)

#6 – The Old Testament.
Sixth, He goes even further than His own predictions and tells them that the whole Old Testament predicted His suffering, death and resurrection. “Everything written about Me in the Law of Moses and the Prophets and the Psalms must be fulfilled.”

If you think that the fulfillment of Jesus’ prediction of His own death and resurrection is incredible, how much more convincing if the predictions made throughout the whole Old Testament, centuries and centuries beforehand, were fulfilled in every detail.

This is how we are to read the Bible – Old and New Testaments. It ALL points to Jesus and His suffering and death and resurrection for our life and salvation and PEACE. But just like these disciples, they didn’t see it.

But when Jesus breathes the Holy Spirit onto a person, the Spirit opens his mind so that even a little child can understand the scriptures. There may still be lots in the scriptures an ‘opened minded person’ still can’t fully comprehend, but this much we know for sure, Jesus Christ, the crucified One, has risen from the dead, and is alive and is with us, and through faith in Him, we can have His peace.

#7 – Repentance and Forgiveness
This brings us to the 7th and final proof that Jesus gives His dear sheep. “Thus it is written, that the Christ should suffer and on the third day rise from the dead, and that repentance and forgiveness of sins should be proclaimed in his name to all nations, beginning from Jerusalem.”

He tells them how HIS PEACE will be announced and given to “all nations.” The book of Acts and the rest of the New Testament is the documentary evidence that tells us that this is exactly what actually happened – AND IS STILL HAPPENING.

Even today, the message of REPENTANCE for the FORGIVENESS OF SINS is being proclaimed in name of the risen Lord, Jesus Christ, to all nations. What began in Jerusalem has been proclaimed for over 2000 years and has reached even you and me, gathered here in this room today just as it did them.

And He gives us the Holy Spirit who ‘opens our minds that we might understand’ – and believe – and take courage – and have His peace in every circumstance and situation.

John was one of those in that room where Jesus appeared on that first Easter night. The opening words of his 1st epistle are a fitting summary of all that we have said.

That which was from the beginning, which we have heard, which we have seen with our eyes, which we looked upon and have touched with our hands, concerning the word of life— the life was made manifest, and we have seen it, and testify to it and proclaim to you the eternal life, which was with the Father and was made manifest to us— that which we have seen and heard we proclaim also to you, so that you too may have fellowship with us; and indeed our fellowship is with the Father and with his Son Jesus Christ. And we are writing these things so that our joy may be complete. (1 John 1:1-4)