Posted on April 2, 2018 by Lutheran Church of the Resurrection

Note: The first minute of this recording is blank. 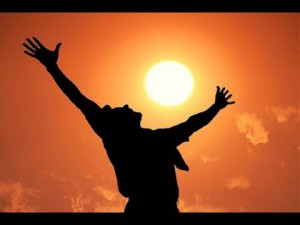 The message for this Easter day is based on the first verse of Exodus, the 15th chapter, which we have already sung twice – once in the Introit and again in the Gradual – “I will sing to the Lord, for He has triumphed gloriously, the horse and his rider he has thrown into the sea.”

From the other side of the Red Sea, Moses leads the people of God in a rousing halleluiah chorus. This is Israel’s Easter celebration in advance of the resurrection of the Son of God from the dead. God’s incredible rescue of His people from their slavery in Egypt and His a
amazing deliverance from certain death at hands of wicked Pharaoh and his army stirs up Moses say, “I will sing to the Lord, for He has triumphed gloriously, for the horse and the rider he has thrown into the sea.”

Today, the one, holy, Christian church SINGS the victory song – for CHRIST IS RISEN! (He is risen indeed. Alleluia!) He has triumphed gloriously.

Today, our 40 day fast comes to an end and we “SING WITH ALL THE PEOPLE OF GOD, AND JOIN IN THE HYMN OF ALL CREATION.” “This is the feast of victory for our God. Alleluia!”

Singing “with ALL the people of God” means ALL the people of God – those who were before us and those are with us even now, and those who will come after us. It means that we sing this victory song together with angels and archangels and all the company of heaven – ALL TOGETHER, “with one voice,” singing to the Lord, for He has triumphed gloriously.

In his revelation of heaven, St. John sees and hears all of heaven singing. “Worthy are you, our Lord and God, to receive glory and honor and power… for You were slain, and by your blood you ransomed people for God from every tribe and language and people and nation…” (Rev. 4:11; 5:9)

John doesn’t identify any of the singers in this heavenly choir. But we know who they are.

Adam and Eve are in that choir. The Garden where they once lived was filled with the singing of “all creation” as the “morning stars sang together and all the sons of God shouted for joy.” (Job 38:7)

But there was one voice in that Garden that refused to sing with the holy choir. And it sang so beautifully that you’d swear it was the voice of angel. But it sang a different song – a ‘protest song’ ‘a song of rebellion,’ a song that called on women and men to rise up and overthrow their own Creator and be free of His stifling laws.

The serpent sang a song about the wisdom of man and the foolishness of God.
• There were stanzas that sang about the justice we deserve and must demand and the injustice of God and His unfair practices and demands.
• There were stanzas about man’s right to reject God’s story, and write his own story and plan his own future and live however and wherever his heart leads him.
• And there were stanzas that beautifully sung the story of man’s ability to conquer every challenge and solve every problem and defeat every enemy and to “make a name for ourselves by building a tower that reaches all the way to heaven,” while scorning the name that God wrote on their hearts and minds along with all of His promises – because really, only fool trusts in God.

And Adam and Eve listened to this fallen angel sing its fallen song. And before they knew it, they found themselves tapping their feet, and humming the tune and singing the refrain, “I will sing to ME, for I have triumphed gloriously. My Creator’s Word and His Promise, I have thrown into the sea.”

And for the first time, songs began to be sung in a minor key and nothing was in tune and all the beautiful harmony was gone – because men and women each sang their own song – no longer “with one voice.” And that’s just about when people began to sing ‘funeral dirges’ and the ‘the blues’ became popular.

Throughout the Old Testament, the prophets prophesy about a day that will come when God will do a NEW THING, and the Creator we create a NEW CREATION, and men and women, boys and girls will sing a ‘new song,’ celebrating God’s incredible rescue His Creation and especially mankind, from captivity to that ‘old song’ that we couldn’t get out of our head or our heart, not matter how hard we try. A ‘victory song’ that sings of a glorious triumph over that fallen angel and our own fallen lives.

And all the people in the Old Testament that believed that the Prophet spoke for God and lived by faith in the prophetic word Himself, lived with the sure and certain hope. “I will sing to the Lord. For He has triumphed gloriously. The horse and the rider He has thrown into the sea.”

“Oh sing to the LORD a new song,” cries the Psalmist in a sure and certain hope that is given by the Holy Spirit. “For he has done marvelous things! His right hand and his holy arm have worked salvation for him.” (Psalm 98:1).

This is the victory that God, has accomplished through the death of His only-begotten Son when He raised Him from the dead on the 3rd day. He has crushed the head of that deceiving angel with its miserable song. He has drown ‘heard-hearted’ YOU in the baptismal sea and raised YOU up with Him from death to life, even life eternal in the same.

So, sing Adam and sing Eve. Your sin has been atoned for. The Word you heard in the beginning has taken on your flesh and bones and blood and ALL YOUR SINS – and you will do well to BEHOLD HIM HANGING ON A CROSS.
• For this is where all your wisdom ends.
• This is where all your justice apart from God’s Law is leading you.
• This is what your self-serving ambitions are gaining for you.
• This is where the story that you have written for your life ends.
This is the final stanza of all who insist on making the serpent’s song the theme song for their life.

Christ Jesus has silenced the ‘old song,’ the ‘serpent’s song,’ that we have been singing since the moment of our conception, and that we still find ourselves singing from time to time, because those old, familiar tunes can be so hard to get out of our head and forget.

So today, before we get too carried away with celebrating and singing these wonderful Easter hymns that we love to sing, we would do well to REPENT, and pray that the risen Lord, Jesus Christ, would give us the Holy Spirit to write the NEW SONG on our hearts and minds and set us to singing it, even like those women at the tomb.

They came to the tomb expecting to find the dead body of their Lord. But the startling announcement of the ‘young man’ was, “Do not be alarmed. You seek Jesus of Nazareth, who was crucified. He has risen; he is not here. See the place where they laid him.”

This angel of the Lord puts a NEW SONG into the mouth of these DAUGHTERS OF EVE with instructions to “go, tell the disciples and Peter that he is going before you to Galilee. There you will meet Him.”

And as leave this GARDEN with the most incredible good news to share, they are so “seized with trembling and astonishment” – that they said nothing to anyone, for they were afraid.”

It’s like that for us too – for Easter is a surprise such that the hearts and minds of man cannot fathom. For there is more forgiveness and more mercy and more love and more life in this NEW SONG than we know how to sing – at least FOR NOW.

But what begins with “trembling and astonishment,” with meek and timid voice, with stammering and stuttering faith, becomes full bodied and boisterous singing and celebration as the words sink in and we are confident to pray, “O Lord, open my lips and my mouth will SING YOUR PRAISE.”

So sing all you sons of Adam and all you daughters of Eve.
• Sing all you faithful and all you unfaithful, all you confessors of the faith and deniers of the Lord, for the Lord has forgiven you all of your sins.
• Let all you who have worked in the vineyard of the Lord from the first hour sing, for you are receiving the reward of your faith.
• And let all those who delayed and didn’t come into the vineyard until the third hour or the sixth hour or the ninth hour or even the eleventh hour, and those who are still waiting to be called – SING. For your Lord is gracious and merciful and receives the last just as joyfully as the first.

Sing the NEW SONG that the Holy Spirit has written onto your heart and your mind in your baptism. “At the Lamb’s high feast we sing, praise to our victorious King. Who has washed us in the time, following from His pierced side.”

Sing the NEW SONG that the Lord now puts onto your lips and into your mouth in His holy Supper. “I will sing to the Lord, for He has triumphed gloriously. The horse and the rider He has thrown into the sea.”