Posted on August 6, 2018 by Lutheran Church of the Resurrection 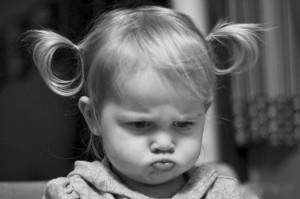 “And the whole congregation of the people of Israel GRUMBLED against Moses and Aaron in the wilderness.”

Which is a shame really, because Moses never really wanted to be a pastor to begin with. He didn’t like public speaking and was content simply shepherding his father-in-law’s sheep. But the Lord called him, even from a burning bush, and the Lord can be pretty persuasive when He wants to be. And Moses went from shepherding sheep to shepherding people.

And sadly, God called Moses to one of those ‘problem’ congregations. One of those congregations that are always griping and complaining about one thing or another and when things don’t go exactly the way they think they should go, or when when they have to suffer a little hardship or even pain because of their faith, they blame their pastor, because that’s what you do when you’re mad at God.

And I suspect that Moses must have prayed more than once, ‘Oh Lord, why did you send me to this congregation?’ To which the Lord would have certainly replied, ‘because it’s the only one there is.’

It’d been 45 days since Moses led the congregation of Israel out of Egypt, through the Red Sea. And they’d run out of food. And they’re in the wilderness. No Shaws or Hannafords. No McDonalds or Burger Kings. And their bellies started to growl.

And the people said to Moses and Aaron, “Would that we had died by the hand of the LORD in the land of Egypt, when we sat by the meat pots and ate bread to the full, for you have brought us out into this wilderness to kill this whole assembly with hunger.”

Hear what they’re saying? They’re saying that if they had the choice between DEATH “BY THE HAND OF THE LORD” in Egypt, and DEATH by starvation in the wilderness, they would have chosen DEATH in Egypt simply because at least in Egypt they had plenty to eat.

Hear what they’re saying? They’re saying that this whole “Exodus thing” was just Moses’ idea – and that Moses’ real motive all along was only to kill this whole assembly with hunger in the wilderness instead of letting them die ‘by the hand of the Lord’ in Egypt with full bellies.

Hear what they’re saying? They’re saying that they believe that the only option is DEATH. And so if DEATH is all you get from God, and God’s servant, then the best way to live is to ‘eat, drink and be merry’ while you can.

They’re NOT saying anything about the LIFE that the Lord gives to His people, even while they’re still on this side of death, that sets them free from being slaves to hungry bellies and the ‘passions of the flesh’ in whatever variety they come.
• The LIFE that sets them free from their captivity to “the law of sin that dwells in their members.”
• The LIFE that makes them captive to the grace and forgiveness and love of God that He would have dwell in their hearts and minds as well as their members.

They’re NOT saying anything about the LIFE that the Lord gives to His people, on the other side of death, that is ETERNAL, which means so much more than ‘never ending.’
• The LIFE that knows no hunger and thirst, but that eats the choicest meats and drinks the finest wines at the heavenly banquet table.
• The LIFE that knows no grumbling, neither morning nor sorrow nor tears, but celebrates a whole new life on the other side in an unending song of praise to God.

So, don’t we just wish that we heard this ‘congregation of the people of Israel’ say at least something to effect of, “not only do we not ‘grumble’ or ‘complain’ about whatever trials and challenges that we may experience in this life of faith in our God, “but we rejoice in our sufferings, knowing that suffering produces endurance, and endurance produces character, and character produces hope, and hope does not put us to shame, because God’s love has been poured into our hearts through the Holy Spirit who has been given to us.” (Rom. 5:3-5).

But we hear none of that. The ‘congregation of Israel’ sees no further than the SEEN and the TRANSIENT. And all we hear is ‘grumbling’ against Moses and Aaron, of which Moses is quick to point out to the congregation that “your grumbling is not against us but against the Lord.”

It’s the same with the congregation in our gospel text. Jesus has shown Himself to be the ‘GREATER THAN MOSES.’ He anticipates the congregation’s hunger in wilderness. And even before they complain, He multiplies enough bread in His very hands to feed 5,000 men and their families with 12 baskets full of leftovers to spare. And for this reason, the want to make him their king.

Jesus tells His disciples to get in the boat and set sail for the other side of the sea while He DISMISSES THE CROWD, no doubt with, “the Lord bless you and keep you, the Lord make His face shine upon you and be gracious to you. The Lord look upon you with favor and give you peace.”

And then He went up into a mountain to pray. And the next day the crowds that had been there and eaten the bread that came from His hand, were back again, looking for him. They saw the disciples sail across the sea – WITHOUT JESUS. They figured they’d find Him right where they left Him. They didn’t know that He had walked across the water and hitched a ride with His disciples. So they jump in their boats and go to Capernaum, which is where Jesus seems to hang out when He’s in the region of Galilee.

And when they find Him, their first question is “how long have you been here?” And there’s a ‘grumbling’ sound in their voice.

Which Jesus recognizes. It’s the same sound He heard from their forefathers in the wilderness when He fed them meat and bread from heaven. “Truly, truly, I say to you, you are seeking me, not because you saw signs, but because you ate your fill of the loaves.”

The heart and the mind and the will of man is completely blind and dead to the things of God.

God comes to us with ETERNAL LIFE and all that is contained therein. He comes to rescue and deliver us from our captivity and bondage to OUR SIN AND DEATH that we have all embraced ever since Adam and Eve embraced that fruit of the tree, that as pleasing to the eye as it was, was filled with that which has poisoned the heart and mind and the will of all mankind.

But all they want from God are the SEEN and TRANSIENT things, which either moths and rust destroy, or thieves break in and steal. And we’re not different. All we really want from God is that He make our decaying and dying life a bit more comfortable. For we would rather “die by the hand of the Lord in Egypt, where we sat by the meat pots and ate bread to the full” than have to experience the pain and suffering involved in having our Lord PUT TO DEATH IN US THAT WHICH STANDS IN THE WAY OF THE LIFE THAT HE HAS COME TO GIVE US.

It is to His ‘grumbling’ and ‘complaining’ people, who demand SO MUCH LESS than He both wants and intends to give to them, that we hear Him speak such tender and gracious words that should drive every ‘grumbler’ to their knees and turn their hearts to ‘repentance.’

“The LORD said to Moses, “I have heard the grumbling of the people of Israel. Say to them, ‘At twilight you shall eat meat, and in the morning you shall be filled with bread. Then you shall know that I am the LORD your God.’ ”

And when they realize how foolish they have been in seeking nothing more than that which perishes from Jesus, who longs to give them that which does not perish, they say what we have been longing to hear them say ever since they were in the wilderness with Moses, “Lord, give us this bread always.”

And our Lord replies, “I am the bread of life; whoever comes to me shall not hunger, and whoever believes in me shall never thirst.”

This is the God WHO IS LOVE, who sent His Son into this world, “that whoever would believe in Him might NOT PERISH but have ETERNAL LIFE.” (John 3:16)
• Who warns that “The thief comes only to steal and kill and destroy. I came that they may have life and have it abundantly.” (John 10:10)
• Who declares, “I am the resurrection and the life. Whoever believes in me, though he die, yet shall he live, and everyone who lives and believes in me shall never die.” (John 11:25)
• Who implores His congregation to “seek first” this LIFE that He gives, trusting that all that you need for your belly “will be added to you.” (Matthew 6:33)

This is the LIFE that comes ONLY through the ONLY cure for that which is the DEATH OF YOU- your SINFULNESS that causes you to SIN and which is your death.

Jesus Christ has taken your HUNGER AND THIRST onto Himself, and He has DIED BY THE HAND OF THE LORD in your place.

All your GRUMBLING and COMPLAINING against your Lord has been answered with His cheerful willingness to take up His cross, even unto death FOR YOU.

Your willingness to forfeit the LIFE that God has given you in your baptism for a pot of stew and a full belly in hell, has been answered by His willingness to suffer the pangs of death and hell in your place, just so that you might repent and live.

As much as we would have loved to hear the congregation of 5,000 full-bellied souls, break out in joyous celebration of thanks and praise to God for this LIFE that He has given them through LIVING BREAD come down from heaven, what we will sadly hear next Sunday is that they continue to “grumble about Him…”

Let it not be so for us, dear members of this congregation of the New Israel. Let there be no ‘grumbling’ or ‘complaining’ about God’s care for us. But let us receive our daily bread in whatever measure our Lord provides it, with thanksgiving, always ready to share our abundance with those in need.

And let us always seek so much more than daily bread from Him, who is the BREAD OF LIFE and who gives Himself to this perishing and dying world, that we would not perish but have ETERNAL LIFE.