Posted on August 27, 2018 by Lutheran Church of the Resurrection 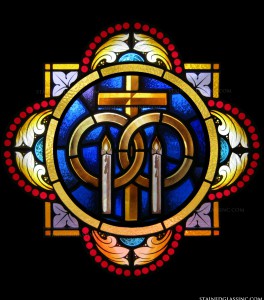 The text for our consideration today is our Epistle reading, Ephesians 5:22-33 – where St. Paul gives us a picture of marriage as it can only be seen through the eyes of faith. No Sociology text book or Political playbook is ever going to describe ‘marriage’ the way Paul does here.

As Paul puts it, the ‘mega mystery’ of ‘marriage’ is really all about “the communion between Christ and His bride, the Church.”

And as such, Paul has singled out two verbs that describe the two ‘actions’ that take place within this ‘holy communion.’

One describes the ‘action’ of Christ towards His bride – He ‘loves’ her. The other describes the ‘action’ of the Church towards Christ, Her husband – She ‘submits’ to Him. These are two ‘actions’ that constitute the relationship between Christ and His bride, the Church – and that THEREFORE, are to constitute the relationship between a husband and wife in Holy Matrimony – because marriage is like a parable – it’s supposed to be AN EARTHLY PICTURE OF THE HEAVENLY REALITY.

“As the Church SUBMITS to Christ, so also wives should SUBMIT in everything to their husbands.” “Husbands, LOVE your wives, as Christ LOVED the Church and gave Himself up for her.”

And so, the Lord God put the man into a deep sleep and opened his side, and from what came from the man’s side, He formed a ‘woman.’  And the Lord God walked the woman down the aisle and presented her to the man.  And for the very first time, the man was able to ‘love’ not just God, but HIS NEIGHBOR as well – because you can’t love your neighbor as yourself until there’s a neighbor who is ‘like’ yourself.

“This at last is bone of my bones and flesh of my flesh; she shall be called woman because she was taken out of man.”

How that first marriage would become the “picture of the communion between Christ and His bride the Church” would not become apparent until the 2nd Adam came into the world and became LIKE US by becoming bone of our bones and flesh of our flesh. And God the Father put this 2nd Adam into a deep, three day sleep. And opened His side with a Roman spear. And with the blood and water that came from His side, He made the one, holy, Christian Church to be His holy bride.

And the Man gave His Name to His bride. “You shall be called Christian because you were taken out of Christ.”

Christ has demonstrated His love for His bride by giving His life unto death, even death on a cross for Her.  And as a “picture of the communion between Christ and His bride the Church,” all husbands are to do the same for their wives.

For the one, holy husband, Jesus Christ, it’s all about His one, holy bride, the Church.  Everything centers around her and everything is purposed and planned and carried out for Her good, which is, that She should live with Him in His Father’s house forever – whether she appreciates it and thanks Him for it and honors Him or not.

His love for Her is unconditional.  He will forsake all for her sake, and be patient with her for as long as is necessary, and remain faithful to her until death parts them, which by His victory over death, never will.

So, just to be sure we grasp what has been said, Christ didn’t take a bride for Himself because of her great beauty or because of she would make Him happy or because they were a match made in heaven.  He took His bride while She was a wretched and filthy sinner, an enemy, a prostitute, and He “sanctified her, cleansed her by the washing of water with the word, so that he might present her to himself in splendor, without spot or wrinkle or any such thing, that she might by holy and without blemish.”

And having become bone of her bones and flesh of her flesh, He brings Her to the wedding banquet and says, now “You shall be bone of MY bones and flesh of MY flesh…”  “Take eat, this is my body.  Take drink, this is my blood.”  And the two become “one flesh” every time it happens. And the Husband rejoices with all the angels in heaven every time the relationship is consummated saying, “look at My beloved bride.  Isn’t she the most beautiful thing you’ve ever laid your angel eyes on?”

Husbands are to love their wives like this.  A husband’s love for his wife is to be the ‘earthly image,’ of this “heavenly reality.” Which sounds impossible.  And for us it is.  But what is impossible with man is not impossible with God.  Marriage is not based on ‘what works,’ but on God’s Word.

Just because it is impossible for men to “Be Christ” to their wives, they nonetheless strive to be the “image of Christ” to their wives.  And every time a husband fails to look and act like Jesus with his wife, he remembers that along with being ‘husband to his wife’ he is also the ‘bride of Christ,’ forgiven and loved by Him who is “abounding in steadfast love and faithfulness.”

In fact, it is precisely because husbands DO NOT live up to the DIVINE EXPECTATIONS that come with the holy office of ‘husband’, that they will always be leading the way to church to hear the ‘bridegroom’ say, ‘I forgive you all of your sins.’

“As the Church SUBMITS to Christ, so also wives should SUBMIT in everything to their husbands.”

The one, holy, Christian Church IS the Bride of Christ. She responds to Her Husband, who “gave Himself up for her” by “submitting” to His love for her. She isn’t interested in establishing her rights or maintaining her independence.  The idea of moving in with Him for awhile just to see if the relationship ‘works’ or as long as He makes her happy is as absurd as it sounds.  Nor does she flirt with other gods and expect Him to be a divine ‘milk-toast- and put up with it.

The Bride of Christ, the Church, knows only one response to Her Lord and divine Husband – and that is, submission.

That word “submission” has a negative sound to modern ears.  We have all had earthly examples that make us suspicious and leery because rather than submitting to ‘true love’ we have been expected to ‘submit’ to ‘fraud’ or ‘selfishness’ or ‘abuse.’

And so, here again we need to repeat a fundamental principle for understanding the ‘mysteries of God.’ We do not form our ‘picture’ of marriage, based on our human experience of it, but on THE DIVINE PROTOTYPE. Just as we do not form our ‘picture’ of what ‘fathers’ are to be like based on the earthly experience of our own fathers – but to THE DIVINE PROTOTYPE of God the Father.

So, as flawed and failed as a wife’s submission to her husband’s flawed and failed love for her might be, she knows that this ‘mega mystery’ is still the end game and the goal of marriage. And so she strives for nothing less than the ‘earthly picture of the communion between Christ and his bride, the church.”

The Church responds to the love of Christ with a grateful heart that wants nothing else but to please Him in all that she does and that resists every impulse and temptation within her to do anything that might dishonor Him.

To submit to Christ is to confess that we are totally dependent upon Him.  We are not complete, not free to be whom we are meant to be, not truly satisfied and happy, unless we are united to Him and provided for by Him with all that we need and could ever want.

And so, submission is really a beautiful thing.  In fact, the Bride of Christ is never more beautiful, never more radiant than when She lives in perfect submission to Her Lord.

“Husbands, love your wives, as Christ loved the Church and gave Himself up for her.”  And, “as the church submits to Christ, so also wives should submit in everything to their husbands.”

Husbands love their wives. And wives submit to their husbands. There’s a distinction there, an order to marriage that reflects the distinction and order between Christ and His Church. But when you actually work these two ‘verbs’ out in this one-flesh union, the distinction is not as great as we sometimes make it out to be.

To ‘LOVE’ and to ‘SUBMIT’ then, are really two sides of the same ‘self-sacrificing’ love that is founded on the love of Christ for His Church.

None of this comes EASY to fallen and sinful men and women. And it gets even harder when one spouse is a believer and the other is not. Yet even here, what else can you do but be the “Christian” that Christ has made you.

So St. Peter encourages the believing spouse to live according to the divine pattern for marriage, that maybe, just maybe, the unbelieving spouse “may be won by the conduct of their [spouse] when they see your respectful and pure conduct.” (1 Peter. 3:1-2)

The one thing that we must all always remember and never forget is that though we all fail miserably as husband or as wife, yet Christ our divine husband, will not fail us. His love for you doesn’t depend on the success of your marriage or on your performance as husband or wife.

Even if you’ve suffered divorce, yet Christ will not divorce you. “I will never leave you nor forsake you” is is unbreakable vow to you.

Even though death may have separated your beloved spouse from you, death cannot separate you from the Lord who is your Husband.

For Christ, your Husband has “sanctified you, cleansed you by the washing of water with the word, so that he might present you to himself in splendor, without spot or wrinkle or any such thing, that you might by holy and without blemish.” “This mystery is profound.”