Posted on September 4, 2018 by Lutheran Church of the Resurrection 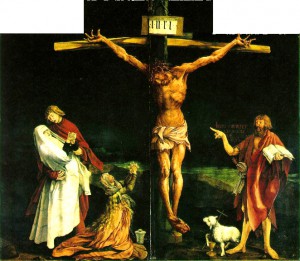 John the Baptist stands at the end of a long line of Old Testament prophets whose job it was to point men and women, boys and girls to the Messiah, the Christ. He did so with words.

John’s special place in this long line of prophets is that he is the one who gets to point to the Messiah, not only with words but also with his body – first, his finger. “Behold, the Lamb of God who takes away the sin of the world,” actually pointing to this One who was conceived by the Holy Spirit, born of the virgin, Mary, who was “dwelling among us in the flesh.”

John had the unique privilege of baptizing the Son of God. He saw the Spirit of God descend onto his Savior and remain on Him. He heard the Father pronounce His blessed benediction onto this Man – “You are my beloved Son; with you I am well pleased.” (Mark 1:10-11)

When others asked John how he could be so sure that this Jesus of Nazareth was the long awaited Messiah, because He sure didn’t look like they expected the Messiah to look, John replied, “I saw the Spirit descend from heaven like a dove, and it remained on him. I myself did not know him, but he who sent me to baptize with water said to me, ‘He on whom you see the Spirit descend and remain, this is he who baptizes with the Holy Spirit.’ And I have seen and have borne witness that this is the Son of God.” (John 1:31-34)

So, John is the one who gets to announce that the ‘FUTURE’ HAS BROKEN INTO THE ‘PRESENT.’ The ancient promise that the ‘OFFSPRING OF THE WOMAN,’ who would come into the world to crush the head of the devil and establish the ‘new creation’ that “all creation had been groaning for as in pangs of childbirth”- is now fulfilled before their very eyes.

The time for waiting is over. The time for delay and procrastination has passed. “Even now the axe is laid to the root of the trees. Every tree that does not bear good fruit is cut down and thrown into the fire… Make straight the way of the Lord.”

John is called “the forerunner of Jesus.” Typically, “FORERUNNERS” run ahead of the approaching King so that when he arrives, His citizens are ready to receive Him as He should be received.

John’s job was to make sure everyone was ready to receive the King of Kings and the Lord of Lords as He should be received. Like his predecessor, Isaiah, John’s job was “to make straight paths, that every valley shall be filled, and every mountain and hill shall be made low, and the crooked shall become straight, and the rough places shall become level ways, that all flesh shall see the salvation of God.” (Luke 3:4-6)

Of course, John wasn’t the least bit interested in road and highway construction. His job was to prepare the HUMAN HEART – for this is where the Lord comes to enter.

A lot of people have the idea that Jesus Christ and His Christianity is all about fixing a few bad behaviors in order to make us better people. Which is true, because bad behavior is always bad. It’s bad for the badly behaved – and it’s bad for those who get hurt by it.

BUT with Jesus, it’s all about the order of things. The CHANGE that Jesus has come into this world to effect in men and women, boys and girls, is from the INSIDE OUT rather than the OUTSIDE IN. He comes to fix a BAD HEART which should and will result in GOOD BEHAVIOR, or at least BETTER BEHAVIOR.

And for a lot of people, that’s a lot more than they’re interested in.

So, how was John received by the men and women, boys and girls who heard him preach that the Messiah is NOT COMING to refine a few bad habits and make you a nicer person – but to tear down and destroy you – and replace the old with something entirely new?

Well, just about how you might expect. In fact, just like we do when we’re told that the Christ has not come to help you be a BETTER PERSON –but to put you to death and then raise you up as a WHOLE NEW PERSON.

Some heard his preaching and welcomed him and headed straight to the Jordan to be baptized into this NEW LIFE. And after baptism, they wanted to know how this NEW LIFE is actually lived. How should I BEHAVE?

That’s what a CHANGE OF HEART does to a person. It changes them from the INSIDE OUT. And that’s the change that Jesus Christ has come to make in you and me.

And that’s why the only proper way to prepare for His coming is REPENTANCE. REPENTANCE is not about improvement or trying harder. REPENTANCE is surrender and giving up on yourself and CONFESSING that there is nothing in you that is worth redeeming, and you’re tired of deceiving yourself and being deceived by all of the false hopes that if only I can get God to help me fix this one thing in my life, then everything will be okay.

This is why John’s preaching is NOT five ways to improve your life or three ways to accomplish your goals or two things you need to do to find real happiness. THIS IS HOW THE KINGDOM O FTHIS WORLD APPEALS TO YOU. John’s preaching is “Repent, for the kingdom of HEAVEN is at hand.’

OTHERS responded by coming to the Jordan River to be baptized, just for the sake of appearances, just to say that they did it. Just to get John off their back basically. To these, John’s reply was, “You brood of vipers. Who warned you to flee from the wrath to come? Bear fruit in keeping with repentance.”

And others responded to John with utter contempt. ‘Who does he think he is?’ ‘He makes me uncomfortable.’ ‘He’s too judgmental.’ ‘What gives him the right?’ John’s preaching was based solely on God’s word, and it ‘GOT IN THE WAY’ of their UNGODLY life. And rather than ‘repent’ they fought against it.
For John, there were certain ‘moral standards’ that were clearly established by God’s Word. And John was not the least bit timid about naming public authorities who should have been public examples of ‘decency’ but who were instead, public examples of ‘indecency’ – to the end that they might REPENT. “For John had been saying to Herod, ‘it is not lawful for you to have your brother’s wife.”

And so, what shall we do? Shall we do as Herod and Herodias did and silence the WORD so that we can continue on in our march towards death and hell unimpeded? “From the days of John the Baptist until now the kingdom of heaven has suffered violence, and the violent take it by force,” says our Lord. Will that be our strategy in this great confrontation between us and the Son of God who comes to us even to this day through His Word – TO GET IN OUR WAY?

OR SHALL WE REPENT? Shall we, “make his paths straight, that every valley shall be filled, and every mountain and hill shall be made low, and the crooked become straight, and the rough places become level ways…”?

“What shall we say then? Are we to continue to sin that grace may abound? By no means!
Because you have been BAPTIZED! Jesus Christ has already GOTTEN INTO YOU. You have already died to sin. How can we who died to sin still live in it? Do you not know that all of us who have been baptized into Christ have been baptized into His death? We were therefore buried with Him by baptism into death, in order that, just as Christ was raised from the dead by the glory of the Father, we too might walk IN NEWNESS OF LIFE.” (Rom. 6:1-5)

This is the life that Jesus Christ has come into the world to give to you. “Newness of life” and nothing less. “For if anyone is in Christ, he is A NEW CREATION. The old has passed away; behold the NEW HAS COME.” (2 Cor. 5:17) We “put off your OLD SELF, which belongs to your former manner of life and is corrupt through deceitful desires, and…put on the NEW SELF, created after the likeness of God in true righteousness and holiness.” (Eph.4:22-24)
In some traditions, this ‘Festival of the Martyrdom of John the Baptist’ is called, ‘the little Good Friday.’ The ‘forerunner ‘of Christ, shows us the way men and women will receive the Christ Himself. They will not tolerate the One who is “the way and the truth and the life” because HE GETS IN THEIR WAY of their sin and death.

On Good Friday, the Word made Flesh was murdered at the hands of the Governor of Judea, Pontius Pilate, who like Herod, the governor of Galilee, did not want to do it, but who feared people far more than he feared God.

John the Baptist points us to the Christ not only with his preaching and with his finger, but also with his head.

By the crucifixion of the Christ at the hands of men and women who WOULD NOT ALLOW THIS CHRIST TO GET IN THEIR WAY, God has judged the WHOLE WORLD ‘guilty.’ And on Easter Sunday, He declared that His Word is TRUE – thus vindicating John the Baptist and all of the holy Prophets before him and all of the holy Apostles after him.

And that holy Word continues to go out into THE WHOLE WORLD – GETTING IN THE WAY of our sinful lives with the call to REPENT and the offer of FORGIVENESS FOR ALL OF YOUR SINS, and the “newness of life” that follows in the Kingdom of heaven that is ‘at hand’ in the person of Jesus Christ.

So, remembering and celebrating the “Martyrdom of John the Baptist” is a really good thing for us to do because it reminds us that our Lord is not going to let us simply continue our journey to death and hell unimpeded.

Because He loves us and will not give up on any of us, He’s going to GET IN OUR way and keep GETTING IN OUR WAY, until the final day comes, the NEWNESS OF LIFE is all there is, and the kingdom of Heaven is ALL IN ALL, and with “the glorious company of the apostles, the goodly fellowship of the prophets, and the noble army of martyrs,” we join our hearts, our minds and our hands and or mouths with the “holy church throughout the world,” to “praise Him and acknowledge Him to be the Lord.”

We stand to sing the Te Deum.