Posted on November 25, 2018 by Lutheran Church of the Resurrection 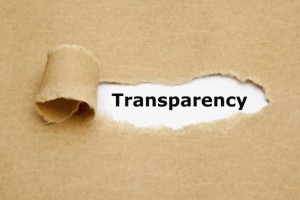 TRANSPARENCY is important in the Kingdom of God as well. Our Lord compares His teaching in parables, which not everyone gets, to a lit lamp that is covered up. The day will come when it will be uncovered, “for nothing is hidden that will not be revealed, nor is anything secret that will not be made known.” (Luke 8:16-17)

Our Lord warns His disciples to “beware of the hypocrisy of the Pharisees.” They’re just ‘play acting’ and ‘pretending.’ It’s all just a ‘cover up’ to make you think that they’re more holy than you are. “Nothing is covered up that will not be revealed, or hidden that will not be made known.” (Luke 12:2)

Writing to the Corinthians, Paul talks about the foundation he laid for the church in Corinth and how others will build on that foundation. And whether their work is gold and silver OR hay and straw will be revealed. Because “each one’s work will be revealed, for the day will reveal it…” (1 Cor. 3:10-13).

For example, Jesus said, “Behold, I am with you always, even to the end of the age.” (Matthew 28:20). And we say, “but I can’t see Him. I’m not sure.” And the pastor keeps saying, ‘He’s right there in the water that you were baptized in.’ ‘He’s right there in the bread and the wine that you take in your hands and put to your lips.’ ‘That’s Him who is speaking to you, ‘I forgive you all of your sins.’

On THAT DAY, all that hides His presence from you now will be taken away like a wall falling down, like a curtain going up. The sun and moon and the entire solar system evaporates in an instant, and every earthly element disappears, all that will be left is the One who is “all in all” and “every eye will see Him.” “For nothing is covered up that will not be made known.”

Adam and Eve tried to hide themselves from each other and from God. There were things they didn’t want the other to see in them, their shame and guilt. And both wanted to hide the same from their Creator. They hid themselves behind some leaves and trees.

But when every leaf and tree is incinerated, there’s nothing left to hide behind and everything is exposed and we’re all naked before God and our neighbor and ourselves. For
“nothing is hidden that will not be made known.”

Just to be clear, IT’S NOT THAT, on that Day, our Lord will finally see everything and all that had been hidden from Him will now be revealed. IT’S NEVER BEEN HIDDEN FROM HIS SIGHT. HE’S ALWAYS SEES IT ALL.

But on THAT DAY, it will be revealed TO US. It will be revealed to us that our Lord has seen everything, absolutely EVERYTHING, all along. On that Day, the mask will be removed from OUR EYES, and we will see each and every one of those millions upon millions of cover-ups and excuses and rationales that we were betting our life on the hope that He didn’t see – BUT HE DID. For “each one’s work will be revealed, for the day will reveal it.”

We will see just how important each and every decision we ever made was, and the real motivation for making every decision as we did. For “each one’s work will be revealed, for the day will reveal it.”

Every time we said one thing but really meant something else will be exposed. All the ‘politically correct speech’ that only masked what we knew was wrong and immoral will be unmasked. What was whispered in the darkness will be shouted in the daylight. What was ‘twittered’ and ‘texted’ in secret will be shouted from the rooftops. “For the day will reveal it.” For “nothing is hidden that won’t be revealed.”
On that Day, when the fire burns up all of the fancy clothes and the fancy degrees and the fancy buildings and the fancy trophies, and the fancy reputations, and there is nothing left to hide behind, we will see ourselves as our Lord has seen us all along – FULLY TRANSPARENT. For on ‘that day,’ our Lord “will bring to light the things now hidden in darkness and will disclose the purposes of the heart.” (1 Cor. 4:5)

Again, in the interest of FULL TRANSPARENCY, it’s not just our deeds that will be exposed – but the intention behind those deeds as well. How many times did our Lord tell us that it’s not simply the things we do that are so deeply disturbing, but the intentions and desires of the heart that are more deeply disturbing. “What comes out of the mouth proceeds from the heart, and this defiles a person. For out of the heart come evil thoughts, murder, adultery, sexual immorality, theft, false witness, slander.” (Matthew 15:18-19)

The Holy Spirit says “the word of God is living and active, sharper than any two-edged sword, piercing to the division of soul and of spirit, of joints and of marrow, and discerning the thoughts and intentions of the heart. And no creature is hidden from his sight, but all are naked and exposed to the eyes of him to whom we must give account.” (Hebrews 4:12-13)

No wonder the prophet says, “who can endure the day of his coming, and who can stand when he appears?” (Mal. 3:1) For “each one’s work will be revealed, for the day will reveal it.”

And ‘THE DAY’ is coming. As to when, “no one knows, not even the angels in heaven, nor the Son, but only the Father.” It has not yet been revealed. It could be next year, or next week or tomorrow or before we get to the closing hymn, but one’s things for sure, “you do not know when the master of the house will come.” This is no time for delay or procrastination, or for unbelief. REPENT AND BELIEVE.

When the Holy Spirit calls you by His gospel and tells you to REPENT, He is telling you to ‘REVEAL’ your sins NOW, that they may be hidden from your Lord when He comes “in that day.”

REPENTANCE turns everything we have been saying so far upside down. Rather than trying to hide our sins of thought, word and deed from God, we REVEAL them by CONFESSING them to Him, firmly believing and not doubting that He then HIDES them from HIS OWN SIGHT in the body and blood of His Son, Jesus Christ our Lord.
Rather than trying to hide what cannot be hidden, we MAKE IT KNOWN to Him who SEES IT ALL. We pray with words that He gives us to pray. “Have mercy on me, O God, according to your steadfast love; according to your abundant mercy… Hide your face from my sins, and blot out all my iniquities. (Ps.51:1,9)

This is what God’s FORGIVENESS is all about. He who sees everything and from whom nothing is hidden, ‘blots out’ all your sin in the blood of His beloved Son, SO COMPLETELY, that what was ‘seen’ is now ‘unseen.’

And in THESE LAST DAYS, when, at its VERY BEST, our faith is so VERY WEAK, we wonder if it is really true. How can it be that my Lord and my Judge does NOT SEE what I SEE so plainly? How can it be that He honors such a small thing as my confession and my prayer with the greatness of His Word and Promise? But “the day will reveal it.” For “nothing is hidden that won’t be revealed.”

Beloved, we do not yet see what we do when we confess our sins to Him and ask His forgiveness. But “the day will reveal it.”

On THAT DAY, the veil will be removed and with unveiled face, you will see that you have laid hold of your Lord, Jesus Christ, and all that He has done for you. For HIS WORK will be revealed. For “each one’s work will be revealed, for the day will reveal it…”

Now, can we begin to understand why the Holy Spirit tells us that for the believer, “that day” will be a wonderful surprise and a jubilant celebration that never ends? For what will also be REVEALED on THAT DAY is all of those works were done by faith in His Word of Promise which this world never saw.

How many in following their Lord, bore crosses which even they themselves couldn’t see, will awaken from their graves and rise to meet their own soul in heaven and receive the crown of righteousness, when “each one’s work will be revealed, for the day will reveal it.”

Today we hear the Holy Spirit tell us that we are righteous and holy in the eyes of God for the sake of Christ our Lord alone. And we say, ‘I don’t see it.’ But “that day will make it plain.”

He says, “you are all children of the light.” And you say, ‘I don’t see it.’ But “but everything that is hidden will be revealed.”

He says, “Beloved, we are God’s children now, and what we will be has not yet appeared; but we know that when he appears we shall be like him, because we shall see him as he is. And everyone who thus hopes in him purifies himself as he is pure.” (1Jn.3:2). And we say, “how can this be?” But “that day will reveal it.”

“But you, beloved, building yourselves up in your most holy faith and praying in the Holy Spirit, keep yourselves in the love of God, waiting for the mercy of our Lord Jesus Christ that leads to eternal life.
Now to him who is able to keep you from stumbling and to present you blameless before the presence of his glory with great joy, to the only God, our Savior, through Jesus Christ our Lord, be glory, majesty, dominion, and authority, before all time and now and forever. Amen.” (Jude 20-25)

(I am heavily indebted to the sainted Rev. Michael Hintz for much of the direction and content of this sermon)