Posted on March 18, 2019 by Lutheran Church of the Resurrection

“At that very hour some Pharisees came and said to Jesus, ‘Get away from here, for Herod wants to kill you.” 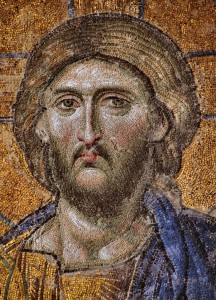 How do you picture the face of Christ? When you put a face to the name of Jesus, what is the expression that you see on His face? Do you picture Him wearing a big smile that tells you that He is happy with us? Or do you picture His face with a deep sadness in his eyes that tells you that He is hurt or disappointed or grieved by something? On Good Friday, we will picture His face all bloody and bruised from the fists that strike Him and the thorns that are pressed down into His scalp.

Today, we are invited to see in the face of our Lord a look of determination that will not be persuaded to detour from the path that He is on. We’re going to call this His ‘steadfast’ face.

Luke had just told us that “Jesus went on his way through towns and villages, teaching and journeying toward Jerusalem.” (Luke 13:22). He’s headed to the cross. At some point, which Luke identifies as “at that very hour,” “some Pharisees came and said to him, “Get away from here, for Herod wants to kill you.”

A death threat like that would be enough melt whatever determination we might pretend to have. In fact, it takes a whole lot less than that to change our face from determination to cowardly fear.

But not our Lord! How ridiculous to threaten Him with death when He is going to Jerusalem to die!

Jesus has the face of one who is ‘steadfastly’ determined to carry out His mission. Everything that lie ahead for Him in the city of Jerusalem and on that little hill just outside the city walls they called ‘the skull,’ was known to Him.

He had visited this city many times over the course of His thirty three years of life. But the purpose and the outcome of THIS journey to Jerusalem would be different than all the others, and He was acutely aware of every terrible detail. “Nevertheless.” That’s a word that only the ‘steadfast’ can rightly use. “Nevertheless,” means, ‘come what may,’ ‘despite the circumstances, ‘knowing what lies ahead.’ “Nevertheless, I must go on my way today and tomorrow and the third day.”

This is the journey that began in heaven and went right through the womb of the virgin Mary and wound its way through the regions of Galilee and Judea as He taught and did miracles and healed multitudes. And when the time had fully come, the time that had been set by the eternal Trinity before the creation of the world, or as Luke puts it, “when the days drew near for Him to be taken up, He set His face to go to Jerusalem.” (Luke 9:51).

The words of Isaiah could well have been His marching song. “But the Lord GOD helps me;
therefore I have not been disgraced; therefore I have set my face like a flint, and I know that I shall not be put to shame.” (Is. 50:7) This is His ‘steadfast’ face.

No one will dissuade Him and nothing will delay Him. If as John the Baptist had declared, “Every valley shall be filled, and every mountain and hill shall be made low, and the crooked places shall become straight, and the rough places shall become level ways…” all so that the Christ may accomplish His mission; and if Satan with every temptation known to hell was unable to derail Him from His course; then certainly these Pharisees with their pathetic scare tactics and Herod with his pathetic threats, would also dismally fail to derail Jesus from the faithful completion of His mission.

At the next Feast of the Passover, the son of Mary and the Lamb of God would be the sacrifice to end all sacrifices for the sin of the world. He would be there! The look on His face is of unwavering steadfastness.

In the counsel of the Triune Godhead conducted in the court of all eternity, the Trinity in perfect Unity determined the course that the, as yet uncreated world, would be redeemed and restored to its VERY GOOD condition after its fall into sin.
• Seeing mankind’s sin and rebellion BEFORE THE WORLD WAS MADE, God determined to take onto Himself the humanity of all mankind in the 2nd Person of His Son – “and He was made man.”
• He would pay the ultimate price, which only He Himself could pay, to redeem His whole creation. The Holy God would take the punishment that sinful man rightly deserves, upon Himself by becoming sin for us.
• And in exchange, He would give sinful man His righteousness and life.
• And for no other reason than that THEY MIGHT BE HIS PEOPLE AND HE MIGHT BE THEIR GOD.

When you hear Him crying, “O Jerusalem, Jerusalem… how often would I have gathered your children together as a hen gathers her brood under her wings, and you would not…” that is you that he is weeping for. You are the children that He longs to gather under His outstretched arms nailed to the cross. You are the children whom He has steadfastly set His face to go to Jerusalem to die for.

In this time before time began, God set the time and the place for this momentous transaction to take place. It would be the Passover in Jerusalem in the year 33 AD. And if we can get our tiny brains around it, what God foresaw in eternity is always in the present – which means that even before He created the world, God saw Christ and Him crucified and the reconciliation of things to Himself. Or as the writer to the Hebrews puts it, “His works were finished from the foundation of the world.” (Hebrews 4:3).

According to plan, “in the fullness of time,” God entered His world in the flesh in a village called “Bethlehem.” Luke indicates that Jesus regularly spent time in Jerusalem as a young boy. At the age of 12 He was in the temple amazing the Rabbis with His questions. They may well have thought that someday, this precocious young man might just grow up to be a Rabbi.

As a grown man, the people who heard Him speak and saw the work that He did were so impressed that they wanted Him to be their king. But He would not be drawn into the quest for political power. No, He went on steadfastly to Jerusalem to become the lowest and the least and give His life as a ransom for all.

The gospels record at least three separate occasions when Jesus made the course He was on clear to the Apostles. “The Son of Man must suffer many things and be rejected by the elders and chief priests and scribes, and be killed, and on the third day be raised.” (Luke 9:22).

Peter swore that this was no way for the Christ to go and wanted Him to change His course. For which Peter received one of the sharpest rebukes that ever fell from the lips of Jesus, “Get behind me Satan – for you are not setting your mind on the things of God but on the things of man.” (Matt. 16:23).

Once in Jerusalem, bound and flogged, the governor himself, Pontius Pilate repeatedly tried to alter our Lord’s course – first proclaiming Jesus’ innocence, then offering the release of a guilty prisoner in his place. When Pilate saw that even he, with all his political power had no power to prevent Jesus from reaching His goal, he washed his hands and handed him over.

Finally, on the Friday that we call “Good,” our Lord reached His goal. Bearing the sin of the whole world in His body, the punishment that we deserve was carried on Him, in our place, in our stead. And only as He is about to breathe His last does He say, “It is finished.” The “IT” is the course that He set His face to run from before the beginning.

The STEADFAST FACE of the Son to reach His goal in Jerusalem is the sole basis for the STEADFAST LOVE of God for you. God’s ‘STEADFAST LOVE’ is His unwavering determination to love you despite your persistence to reject Him and not be loved by Him. His ‘steadfast love’ is His unfailing readiness to hear your confession and answer with His absolution – “I forgive you all of your sins.”

Today, my brothers and sisters, we are invited to look into the STEADFAST FACE of our Lord
• who has gone to Jerusalem for us,
• and has finished His course on the 3rd day for us,
• and let His face shine upon us.

And as the water washed over you, you reached the goal of your journey, for you were crucified with Christ and raised to new life in Christ. And the sign of the cross was written on your forehead and upon your heart that marks you as one, redeemed by Christ the crucified. And now you are on the way that leads, not to the cross, but to heaven.

THEREFORE, REMAIN STEADFAST! DO NOT CHANGE COURSE. DO NOT TURN BACK. DO NOT GIVE UP. LET NO ONE DISSUADE YOU, AND DO NOT BE DELAYED.

I tell you that even DEATH THREATS HAVE NO POWER OVER YOU, for you have already died and you belong to the One who, by His steadfastness, has conquered even death, even your death.

Listen to James. “Blessed is the man who remains steadfast under trial, for when he has stood the test he will receive the crown of life, which God has promised to those who love him.” (James 1:12)

Listen again to Paul. “One thing I do, forgetting what lies behind and straining forward to what lies ahead, I press on toward the goal for the prize of the upward call of God in Christ Jesus… For our citizenship is in heaven, and from it we await a Savior, the Lord Jesus Christ, who will transform our lowly body to be like this glorious body, by the power that enables him to subject all things to Himself.” (Phil. 3:14, 20).

“May the Lord direct your hearts to the love of God and to the steadfastness of Christ.” (2 Thess. 3:5)