Posted on May 1, 2019 by Lutheran Church of the Resurrection 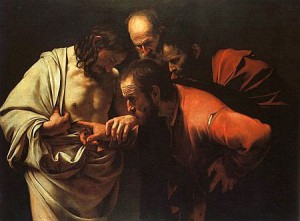 The sanctuary that was full on Easter Sunday is not as full today. I wonder why? I know families who never go to church but who had family over last Sunday for Easter dinner. I wonder why?

Then again, there were lots of people in church on Easter Sunday in Sri Lanka, whose blood was mingled with the blood of Jesus. They didn’t go to church on Easter expecting to be martyred for their faith. But they were. And everything that we proclaim and sing on Easter was PERFECTED in them during their worship last Sunday.

And there are many, many Christians on this planet who REGULARLY bear witness to the power of God who raises the dead, by going to church, knowing that it could very well result in death.

But that’s what Easter is all about isn’t it? Easter is the declaration of FREEDOM FROM THE FEAR OF DEATH, because Jesus Christ has conquered death by dying and rising again. And He says, ‘I did this for you,’ and ‘you’re coming with Me.’ ‘So, don’t be afraid. What can this world do to you now that I have overcome the world?”

So I hope you realize that if you mean what you say when you say that, you mean that if someone were to come into this sanctuary today, right now, and blow it up, it would be Easter PERFECTED in you. And let’s hope it doesn’t happen that way. But it will happen in some way or another, even it’s to lie down and fall asleep and wake up in heaven. But however it happens, it’s Easter PERFECTED in you.

But until it is, we live by faith. And because our faith is weak, we have our doubts. And doubts lead to fear. And fear leads to running and hiding from that which we’re afraid can hurt us and maybe even kill us.

And that’s just the picture that we get of the “one, holy, Christian and apostolic church” on that first Easter. “On the evening of that day, the first day of the week, the doors being locked where the disciples were FOR FEAR OF THE JEWS…”

They were fully expecting that what happened in Sri Lanka was going to happen to them. And they still didn’t know what Easter was all about. So who can blame them for living in fear?

Trust has to be earned. And Jesus has earned our trust. “He is risen! He is risen indeed! Alleluia!

Luther’s explanation to the 1st commandment is that we are to ‘fear, love and TRUST in God above all things.’ The first two are unconditional, based solely on WHO HE IS – He is God. But we are to TRUST Him based on WHAT HE HAS DONE. He not only said that He would be crucified, died and buried and then raised to life on the 3rd day, HE DID IT. He’s earned our TRUST. He is TRUSTWORTHY.

We on the other hand, have not earned His trust in us. We have given Him every reason to not trust us because we repeated have not done we have promised Him we would do or what He has commanded us to do. WE DEPEND SOLELY ON HIS LOVE FOR US.

So because He loves His little lambs and doesn’t want them living in fear, He comes right through the locked doors with His gracious greeting, “Peace be with you.” And along with HIS WORD, He shows them HIS WOUNDS – THE EVIDENCE.

“Then the disciples were glad when they saw the Lord.” For it is by His wounds that they know that He LOVES THEM, and they can trust Him.

Just three nights earlier, on that night when He was betrayed, He had told them, “A little while and you will not see me, and again in a little while you will see me… You will be sorrowful but your sorrow will be turned to joy.” (John 16:18,20). Now, probably in the same ‘Upper Room’ in which He had given them His body to eat and His blood to drink, He is keeping His Word. HE IS EARNING THEIR TRUST.

The whole flock was in church that night, except for just one. Thomas was one of those who wasn’t in church on Easter. I wonder why?

The others can’t wait to tell him the good news. “We have seen the Lord.” “But he said to them… ‘I WILL NEVER BELIEVE.’”

What Thomas meant, of course, is “I’ll never believe AGAIN.” Because he HAD believed at one time. He had loved Christ at one time.

When Jesus insisted on going to Jerusalem to visit Lazarus’ grave, everyone knew that Jerusalem was a hotbed of terrorism against Jesus and His disciples. But Thomas “said to his fellow disciples, ‘Let us go that we may die with him.’” As if to say, “I’d rather die with Him than live without Him.”

Sound familiar? Which of us haven’t sworn that we’d gladly die for Christ’s sake rather than deny Him? Which of us haven’t said, “I’d rather die than live without Him”? But then the trials come, and the temptations keep coming. And its’ one thing after another every little thing demands your undivided attention and then it becomes obvious that you’re going to have to give something up if you REALLY want to go with Him. And suddenly it all gets REAL.

It all got REAL for Thomas when the terrorists came into the Garden with their knives and swords and clubs and took Jesus. At first Thomas just stood there. And then he ran. Why? Because he trusted Christ and got burned for it? No.

I’ve known people who have thought the Lord burned them, and maybe you do too, and maybe you’re one of them. “I used to worship God, but then He let my child die! And I’ll never worship God again!” “I thought a relationship with Christ was supposed to change my life. I believed for a while, but things just got harder. I’ll never believe again.” Why? Because they trusted Christ and got burned for it? No.

Thomas knew that it was not His Lord who failed him but he who failed his Lord. He sounded all brave and courageous. But when life got real, HE BURNED HIS LORD.

It’s responses like Thomas’ to our evangelistic outreach to others that tend to scare us away from every doing that again. We’re not told how the others responded to their brother, Thomas. But it sure seems that it was something like, ‘Thomas, why don’t you just come to church with us this week.’

“Eight days later, his disciples were inside again, and Thomas was with them. Although the doors were locked, Jesus came and stood among them and said, ‘Peace be with you.’

And then, as though He had heard every word that Thomas had spoken to the others, as though He had seen that nightmare that had been on continuous play in Thomas’ head since Good Friday, he said to Thomas, ‘Put your finger here, and see my hands; and put out your hand, and place it in my side. Do not disbelieve, but believe.’”

Thomas answered, ‘My Lord and my God.” And the good Shepherd found His one, lost sheep and brought it home.

“Jesus said to him, ‘have you believed because you have seen me? Blessed are those who have not seen and yet have believed.”

Brothers and sisters, it’s not about trusting in yourself. It’s about trusting in Jesus. It is not because of YOUR FAITH in Him that you should be at peace and be glad. It is because of HIS FAITHFULNESS to you. For He is the One who saw you in great danger and said to His Father, “Let me go that I may die for them.” As to say, “I’d rather die for them than live without them.”

He has earned your trust. Now what do you say to that Thomas? Thomas answered, “my Lord and my God.”

Now, what say we? Because Jesus has made this account all about us. “Blessed are those who have not seen and yet have believed.” That’s us. Will you TRUST Him while He is out of your sight? Will you TRUST Him based solely on His Word?

Listen when He says, “A little while and you will not see me, and again in a little while you will see me… You will be sorrowful but your sorrow will be turned to joy. And no one will take your joy from you.” (John 16:18,20).

“Blessed are those who have not seen and yet have believed.”
Friends, the day is coming when you will open your eyes and you WILL SEE.
And all of your UNBELIEF will be swallowed up in victory.
And Easter will be PERFECTED in you.

But until then, He comes to you with His wounds and puts them into your hand and your mouth. And by these, we know that He loves us and we can trust Him.