Posted on July 15, 2019 by Lutheran Church of the Resurrection 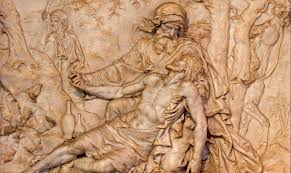 “When the days drew near for Him to be taken up, He set His face to go to Jerusalem.” Luke’s ‘travelogue’ of the journey of Jesus continues.

Last Sunday, we heard that Jesus sent 72 disciples, “like lambs among wolves,’ to prepare the way before Him by announcing His message of ‘peace.’ “When you enter a village, say ‘Peace be with this house.’”

Upon their return, they were all excited that “even the demons are subject us in your name,” only to hear Jesus respond with, “do not rejoice in this, that the spirits are subject to you, but rejoice that your names are written in heaven.”

“And behold, a lawyer stood up to put him to the test. This is the kind of thing that lawyers do. Lawyers love to put others to the ‘test.’ Winning the case involves proving that the other is wrong or that his claims are false.

‘Teacher, what must I do to inherit eternal life?’” That’s a question you don’t hear very often outside of church – maybe because not many people believe in such a thing as ‘eternal life’ anymore – ‘when you die you’re dead and that’s all there is.’

In the Book of Job, Job asks the question, “if a man shall die, shall he live again?” (Job 14:14). If ancient man was concerned with the question of life after death, the question today is more often, ‘is my cholesterol under 200 and is my blood pressure and weight where it ought to be. How do I ‘live my best life now.’

Jesus responds to this ‘lawyer’ on the lawyer’s his own terms. Answering his question with a question, he says, “What is written in the Law? How do you read it?” Literally, how do you ‘recite’ it?

And Jesus replies, ‘there you go. You’ve answered your own question.’ “Do this and you will live.”

And now the ‘lawyer’ realizes that this ‘test’ is not moving in the direction that he had intended. He is smart enough to know that if that’s what he must do to inherit eternal life – LOVE God and LOVE my neighbor, that he has asked the wrong question.

So, clever lawyer that he is, rather than falling into that ‘trap,’ he moves for a mistrial based on a technicality. “Who is my neighbor?”

He wants Jesus to untangle that confusing complex of variables such as bloodline and race and nationality, and liberal or conservative, democrat or republican or libertarian, pro-life or pro-choice, believer or unbeliever and on and on and on until it becomes IMPOSSIBLE TO DETERMINE just “who is my neighbor.”

In reply, Jesus gives this lawyer “a man…” with none of the confusing complex of variables whatsoever. Just “a man…” We don’t know his race, nationality, political affiliation, whether he’s married or single, has children, a steady job, gay or straight, a Red Sox or a Yankees fan? We don’t know if this ‘man’ is a ‘good’ man or a ‘bad’ man.

And so Jesus redirects the lawyer’s question. If it’s about LOVE, then it’s not about who qualifies as ‘my neighbor’ and who doesn’t. It’s about ‘being a neighbor’ to whoever is in your path.

“A MAN was going down from Jerusalem to Jericho, and he fell among robbers, who stripped him and beat him and departed, leaving him half dead.”

Jesus has turned the lawyer’s question from ‘who is my neighbor’ to “who will be a neighbor to A MAN.” Not the Priest or the Levite. They SEE this man, but immediately disqualify him as being ‘NOT MY NEIGHBOR,’ and therefore pass by on the other side of the road.

They had their reasons for doing so I’m sure. “I’ve got responsibilities and others are depending on me to be somewhere to do something. It would actually be irresponsible of me to stop to help this man because I would not fulfill my responsibilities.’ Or something like that.

“But a Samaritan, as he journeyed…”

Samaritans were the ‘prototypical’ confusing complex of variables. They were mixed race, mixed religions and mixed moralities. If there was anyone whose name you could be sure was not written in heaven, it was a Samaritan. Among good and faithful Jews, Samaritans were despised and rejected, as one from whom men hide their faces.

Jesus presents a Samaritan who is on a ‘journey,’ just like He Himself is on a journey. “But a Samaritan, as he journeyed, came to where he was, and when he saw him, he had compassion.

He asks no qualifying questions or makes no ‘background checks.’ He simply binds up his wounds, and spends his precious wine and oil on the man. He puts him on his donkey while he himself walks. He takes him to an inn where he can rest and recover and he pays for everything. And then he promises to come back again and repay the man’s entire debt.

Jesus portrays a man who puts his own wellbeing aside and risks physical danger and his reputation and even his money, to rescue ‘a man’ from death. Here is a man that is a repudiation of the very fabric of our society, a man who considers that all that he has is to be used for the benefit and welfare of his neighbor, a man who presents his very life as a living sacrifice.

And then Jesus asks the closing question. “Which of these three, do you think, proved to be a neighbor to the man who fell among the robbers?” “He said, ‘the one who showed him mercy.” “And Jesus said, ‘you go and do likewise.’”

We need to be sure to hear what Jesus says to the lawyer here. The lawyer asked Jesus, “what MUST I DO to inherit eternal life.” And maybe we good Lutherans expected Jesus to say, ‘my good man, you’ve got it all wrong. It’s not about ‘doing’ is only about ‘believing.’ You can’t DO anything. Just believe.’ But that’s not what Jesus does here. “GO AND DO likewise.”

Today, because of this parable that Jesus told to this lawyer whom He met on His journey to Jerusalem, the reputation of Samaritans has been restored and we all now recognize that there are such things as ‘Good Samaritans.’ In fact, being called a ‘Good Samaritan’ is one of the highest compliments we can give or receive.

And the truth is, there are some who deserve to be called ‘Good Samaritans’ for their willingness to give themselves and all they have to help another. But any good lawyer worth his pay would ‘test’ that claim and make the counter-claim that the greater truth is that there are some people who help some people some of the time. And even that, not to the fullest possible extent possible.

There is only one, Good Samaritan, and that is Jesus Christ, who in perfect love for us beaten, robbed, half-dead and entirely helpless men and women, had compassion on us and gave Himself unto death, even death on a cross, all just so that we might be saved and ‘live’ and even ‘live eternally.’

You have been baptized. The sign of the cross has been written upon your forehead and upon your heart, marking you as one redeemed by Christ, the crucified. God has written your name in heaven and you have eternal life.

And so, you can stop worrying about what you must do to have eternal life. You can stop trying to do what you must to inherit what you have already been given freely, by grace alone, even while you were beaten, robbed, and fully dead in your sins. Christ as set you free from all of that so that you may have compassion on your neighbor and truly love him and her – not so that you may be saved, but because you already are.

Unfortunately, Jesus leaves the outcome of this parable open. What ever became of that ‘half-dead man’ after he was saved by his neighbor? And neither does Luke follow up with that “Lawyer” to see what ever became of him either. It would have been nice to know.

But what could be a more tragic ending to this story than for the man who was rescued by the Good Samaritan, as he leaves the inn and returns to his home, to come by a man lying in the road, beaten, robbed and half dead, and pass by on the other side of the road?

What could be a more tragic outcome for the lawyer than for him to reject Jesus and join that chorus of lawyers who, with one voice shout, “crucify Him, crucify Him.”

I suppose the best we can do is decide how this story will go for us.