Posted on September 15, 2019 by Lutheran Church of the Resurrection 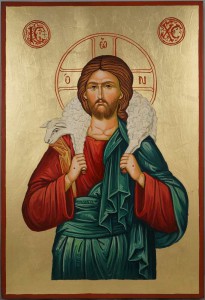 The prophet Isaiah and the apostle John both have their visions of God seated on His throne. And in both visions, the angels are hovering over the throne, and in unending worship, they sing the ‘Sanctus,’ “holy, holy, holy is the Lord of hosts…” “Holy, holy, holy, is the Lord God, almighty.” (Is.6:3; Rev. 4:8)

And so the prophet Habakkuk declares of God, “You are of purer eyes than to see evil. [You] cannot look at wrong.” (Hab.1:13).

The Psalmist sings, “For you are not a God who delights in wickedness; evil may not dwell with you. The boastful shall not stand before your eyes; you hate all evildoers.” (Ps.5:4-5).

The Law that is written on our hearts is that the Holy God is available and accepting and loving of those who are devout and obey His commandments, but evildoers who do not keep His commandments are rejected and cannot come near Him.

So, what then does it mean, when we hear in our gospel reading today that Jesus Christ, the holy Son of God, “welcomes sinners and eats with them,” and that “tax collectors and sinners were all drawing near to Him”?

This is a truth that is hard for us to accept – because it runs so contrary to that Law that has been written on our hearts. But the ‘gospel’ does what the ‘law’ cannot do. “For by grace you have been saved through faith. And this is not of your own doing; it is the gift of God, not a result of works, so that no one may boast.” (Eph. 2:8-9)

And so, it is to the end that we would not “grumble” but rather “draw near to hear Him,” that our Lord tells “this parable” of the shepherd and the woman.

“What man of you, having a hundred sheep, if he has lost one of them, does not leave the ninety-nine in the open country, and go after the one that is lost, until he finds it? And when he has found it, he lays it on his shoulders, rejoicing. And when he comes home, he calls together his friends and his neighbors, saying to them, ‘Rejoice with me, for I have found my sheep that was lost.’ ”

The key to unlocking the driving force within this story and the next one is the matter of OWNERSHIP. These are not someone else’s ‘sheep’ or ‘sheep’ in general, but “my sheep” says Jesus. “Rejoice with me for I have found My Sheep that was lost.”

Sometimes we hear people tell us that they lost their wallet or their keys or their cell phone. And our reaction is to pity them and feel bad for them. But frankly, it’s their problem, not mine. And wallets, keys and cell phones can all be replaced. But, if it’s MY wallet or MY keys or MY cell phone that I lost, then it’s a whole different story, isn’t it? If it’s ‘MINE,’ I drop everything I’m doing and I search for, and I can’t rest UNTIL I FIND IT.

And what relief and joy when I have found MY lost wallet or lost keys or lost cell phone. And how much more would we multiply that urgency to find and that joy in finding if what was lost was MY child?

This is the way it is for God. We are His children. We belong to Him. This is not someone else’s loss, it is His loss. And it is this that drives Him to “leave the ninety-nine in the open country and go after the one that is lost UNTIL HE FINDS IT. And when He finds it, He lays it on His shoulders, rejoicing.”

Any parent who has several children certainly loves each and every one of them and doesn’t want any harm to come to any of them. But if just one of them becomes sick or is injured or goes missing, that one child now becomes the center of attention. And if the mother and father must leave the other children alone or in the care of others to help the one child, it doesn’t mean that they love the others any less or the one any more. (Luther)

We may hear this famous parable as a stern rebuke to “the Pharisees and the scribes who grumbled saying, ‘This man receives sinners and eats with them.’” And if you’re one who cares little for those who have wandered away from the truth and are lost in their sin, then this is the way you ought to hear it – AND REPENT. Let your ‘grumbling’ against Your Lord that He is being too gracious and too forgiving of sinners, declare to you that you are a ‘sinner’ too – that you know that this Jesus has come to find you and to receive you and eat with you too – because you belong to Him.

Or, we may hear this parable as a gracious invitation to “the sinners” who have wandered away from the truth and are lost in their sin. And if you are one who continues to hide because you’re afraid of being found as a ‘sinner’ by the holy God, this is the way you ought to hear it – AND REPENT. Let your ‘bleating’ and ‘crying’ in fear be heard by your Good Shepherd. For He has come for you and He will not stop calling to you until He finds you. Because you belong to Him. And He has paid a great price to bring you home.

The interesting thing here is that in many of the archeological finds of these paintings and sculptures from the middle-east, the sheep on the shepherd’s shoulders is so grossly out of proportion and over-sized, often larger than the shepherd himself. If anyone should know the proper proportion between shepherd and sheep it would be a middle-easterner. But the distortion is intentional and meant to show the tremendous weight and burden that the Shepherd bears to bring His sheep home.

And just what is that ‘burden’ that the shepherd carries in order to bring his lost sheep home? It is their sin. Hanging from the cross, the Good Shepherd cries out, “My God, My God, why have you forsaken me?” The reason He is forsaken by God is that He is bearing your sin and mine, even the sin of the whole world on His shoulders. And a holy God cannot look upon all evildoers. Sinners cannot stand before His eyes.

From clueless sheep that wander away from the care and protection of the shepherd, Jesus now presents another picture for why the holy God “receives sinners and eats with them.”

“What woman, having ten silver coins, if she loses one coin, does not light a lamp and sweep the house and seek diligently until she finds it?

Again, if it were some other woman who lost a coin, she’d say, ‘don’t worry about it. It’s only money. You can always get more.’ But these “ten silver coins” were given to HER, and she is the one who has been entrusted with a stewardship. And “if she loses one coin,” it’s her reputation and name that is damaged and she is the one who will no longer be counted as ‘trustworthy.’

And so there is no limit and no end to her looking for it. She “seeks diligently UNTIL SHE FINDS IT.” And WHEN she does, not IF she does, but WHEN she does, she calls together her friends and neighbors, saying, ‘rejoice with me, for I have found the coin that I had lost.’”

If you ever wonder or worry that you may not be worthy of your Lord’s “seeking diligently” for you, take heart. It is not because of your ‘worthiness’ but because of His ‘worthiness.’ It is “for his own name’s sake,” His name that is above every name, that He seeks diligently until He finds the lost one that belongs to Him.

Both of these stories have their point of connection to each of us personally and individually in our baptism.
• In your baptism, the holy God has found you who belong to Him, lost in the wilderness and brought you home.

• In your baptism, the holy God has found you who belong to Him, buried in the sin of the world. And He holds you up to Him who entrusted your life into His hands declaring, “I have lost none of all whom you have given me.”

• In your baptism, the holy God has taken away all of your sin so that “you may be holy as He is holy,” so that He may “receive you and eat with you.”

And so we join in the celebration of great joy with of all of your brothers and sisters in Christ, and of all the angels and archangels, and all the company of heaven – not for yourself, but for your Lord – who is faithful and worthy to be praised.

And we keep ‘repenting’ and never stop – if for no other reason than that it causes so much rejoicing on earth and in heaven for Jesus and what He has done.

And we keep “drawing near to hear him,” – if for no other reason than we know what peace and joy there is in being found by Him and hearing Him whisper into your ears, “I forgive you all of your sins.”